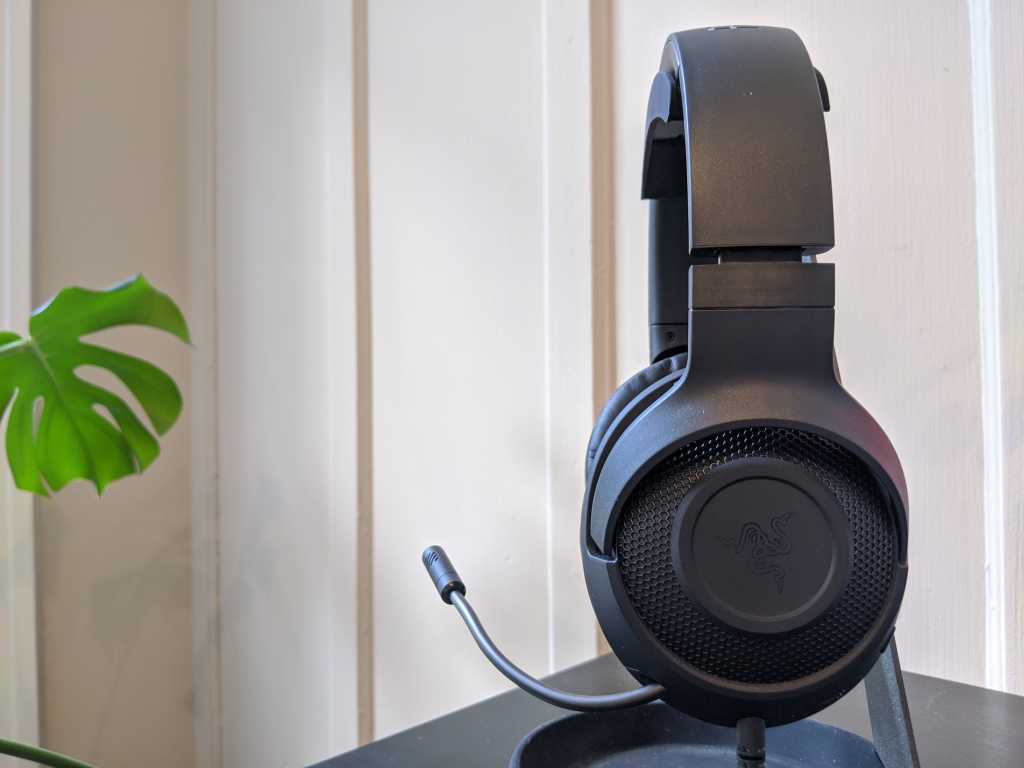 The Razer Kraken X is a no-frills take on a headset line that already had few frills to offer. For $50 it’s not a bad option, but it rests in the shadow of the standard Kraken, which offers better comfort and sound quality for only $20 to $30 more.

The Razer Kraken has long been a favorite of people buying a gaming headset on the cheap. Listing at $80, and often discounted even lower, it’s one of the cheaper name-brand headsets on the market.

But what if it were even less expensive? The new Razer Kraken X retails for a mere $50, or $30 cheaper than its sibling. That’s proving to be a popular price lately, with both HyperX’s Cloud Stinger and Astro’s A10 vying for budget-conscious buyers in recent years. The Kraken X boasts a few advantages over the competition though, including rudimentary 7.1 support and the classic Kraken look.

It’s still not an amazing headset, mind you—but for $50? You could do (a lot) worse.

Taking another crack at it

I’ve said in the past: Just because you want a cheap headset doesn’t mean you want a cheap-looking headset. Luckily, Razer understands that sentiment better than just about any other manufacturer. The Kraken X may sell for only $50, but it looks near-identical to its full-price predecessor. Jet black, with the same metal mesh and three-headed snake logo on the ears, the Kraken X blends right in with the rest of Razer’s headsets.

Only the details differ. For instance, the Kraken X’s microphone is unable to retract. A huge deal? No, not really. It’s not like you’d want to take the Kraken X out of the house even with the microphone removed. That single change wouldn’t magically make it look less like a gaming headset. But I prefer having the option to get the microphone out of my face, either by retracting it, flipping it up, or detaching it entirely. With the Kraken X, the microphone is always there in your peripheral vision, and that can be annoying at times.

Razer also cut a few corners on build quality. The Kraken X headband is plastic all the way through, without the faux-leather trim or the metal reinforcement that underpins the standard Kraken. It’s also less padded, with only a thin layer in the center of the headband. The other Kraken models extend the padding to the sides of the headband as well, an all-encompassing cushion.

That said, Razer gets away with it because the Kraken X is incredibly lightweight. The all-plastic construction brings the Kraken X in at a mere 8.9 ounces, compared to 11.3 ounces for the standard Kraken. That might not sound like much but it makes a huge difference in a device you wear for hours at a time. The Kraken X even manages to best HyperX’s aforementioned Cloud Stinger, which weighs 9.7 ounces.

It’s surprisingly comfortable as a result, even if Razer skimped on padding. The fit is a bit tight at first, and the headband adjustments are clunky and stiff, but the Kraken X feels great once broken in. Give the headband a few gentle flexes when you take it out of the box to speed that process along.

And Razer finally moved away from circular earcups, which is great because…well, ears aren’t circular. It’s hard to tell, but the Kraken X’s earcups are slightly elongated. The resulting oval-shaped hollows are snug compared to Razer’s past headsets, but form a better and more even seal against the skull, blocking out more ambient noise.

All in all, it’s a solid effort—especially for $50—though there are a few weak points. The cord is stiff rubber, a far cry from the silky braided fabric Razer uses on its other peripherals. The earcups also hold a lot of heat. That’s a problem with leatherette in general, but the Kraken X seems especially bad. I’ve had sweaty ears wearing the Kraken X here in San Francisco, which almost never happens. And the microphone mute button is awkward and unintuitive, hidden on the rear of the left ear. Click it in and you’re muted—but you can’t even tell without reaching back to feel the switch’s position again. It’s a pain.

Still, I’m impressed. Razer trimmed $30 off the Kraken’s price with only a few minor changes. You couldn’t ask for much more.

The Kraken X sounds pretty good too. Like the Cloud Stinger and A10, the Kraken X is geared towards mid-range response. It’s a decent bet for these entry-level headsets to make. The mid-range is responsible for much of what we hear day-to-day, and pushing it to the forefront helps dialogue pop. First impressions of the Kraken X are fairly positive.

It lacks a certain something though, at times. Bass response is anemic, and the treble range (especially cymbal crashes) fails to break free from the mix the way you’d want. It’s rarely bad enough to be distracting, but I probably wouldn’t reach for the Kraken X first if I had other options. You lose the depth and power of a well-mixed action sequence, and the nuance of the quieter moments.

It gets the job done though. As an entry-level gaming headset? The Kraken X conveys the necessary tactical information, and sounds halfway decent doing so. Like the Cloud Stinger and A10, it’s “good enough,” and that’s really all we should expect from a $50 headset.

I also mentioned up top that the Kraken X boasts 7.1 surround sound support. Now this was surprising. Traditionally software-driven 7.1 has been reserved for USB headsets. The baseline Kraken X terminates in a standard 3.5mm jack though. How was Razer going to pull off 7.1 support with a device that doesn’t show up in its Synapse software suite?

And the answer: Razer didn’t use Synapse. You have to download a completely separate program instead, the aptly named “7.1 Surround Sound.” Note that it only works on Windows 10 PCs. You’ll also need the activation code that came with your Kraken X, so don’t throw it out or you’ll need to go fishing in your recycling bin. (I definitely didn’t have that happen. Nope. Not me.)

Anyway, it’s an 84MB utility that attempts to replicate the 7.1 capabilities of Razer’s USB headsets for the 3.5mm Kraken X—or for any speakers you attach to your PC. You can set the “Output” field to anything, so you can technically apply Razer’s 7.1 surround solution to a high-end pair of headphones or a Logitech headset or your monitor’s built-in speakers or anything else that outputs sound. It’s not magic, and likely won’t sound great, but you can do it.

The intended destination is your PC’s headphone jack though. Plug in the Kraken X, run the utility, and you’re able to toggle 7.1 surround on and off. And then…not a lot happens, in my experience. I’m notoriously skeptical of software-driven 7.1, but I’ve been impressed by Razer’s past efforts, including the high-end Kraken Ultimate. The Kraken X, not so much. It does broaden the soundstage a hair, and might give a slight advantage in shooters, but the stereo sound is probably just as useful in 95 percent of scenarios.

It’s interesting to watch Razer try to tackle this problem though. As I said, 7.1 support is almost exclusively reserved for headsets with built-in USB soundcards. While Razer’s results aren’t very exciting yet, I’d love to see it evolve. After all, software-driven 7.1 was universally panned less than a decade ago. Now it’s—well, not amazing, but at least serviceable. Maybe this 7.1 Surround utility will be just as “okay” one day.

Finally, it’s worth mentioning that the Kraken X’s microphone is loud. It picks up a ton of background noise. Again, this is a problem that’s typically solved by headsets with USB soundcards, as they employ noise gates. The Kraken X doesn’t have that luxury. It performs fine in quiet environments, but if you’ve got talkative roommates or street noise or even a whirring box fan sitting nearby? This might not be the best headset for you.

That’s not really a problem. Razer has a headset for everyone, at every price point, and the Kraken X is a solid option at $50. It’s comfortable (enough), it sounds decent (enough), and the microphone works. It’s not exciting, but it checks all the boxes I’ve come to expect in this price range.

Still, it’s hard to recommend going with the somewhat-less-comfortable Kraken X with its somewhat-less-impressive audio when for just $20 or $30 more you could have a much better headset. It’s a relatively small difference in price and a relatively large difference in performance, and for most people, the standard Kraken is the better option—or any of a number of different headsets in the $80 range.