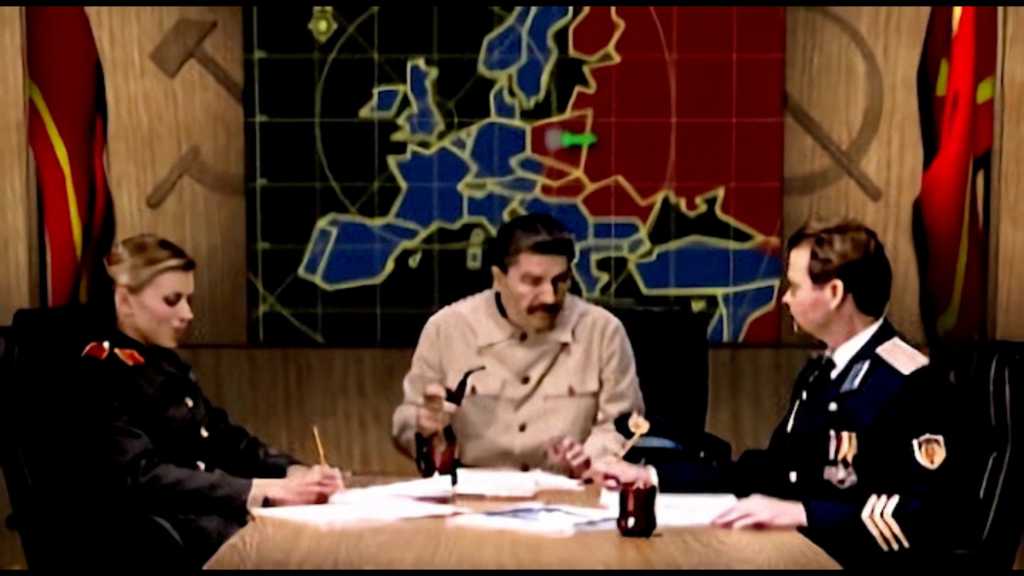 “Welcome back, Commander.” It’s been easily two decades since I last sat in this chair, presiding over the Brotherhood of Nod’s forces. A long time.

I’ve grown older but the man briefing me hasn’t aged a day. His name is Seth. Just Seth, as he reminds me, second in command only to Kane himself. He stares back at me from the screen, face bathed in red light, a beret perched on his head. “I have a task for you,” he says. “This is Nikoomba, and he is causing the Brotherhood much grief. His views do not coincide with ours. Silence him.”

Two decades, but for a moment it’s like I can see my younger self again. I was probably eating Dunkaroos at a friend’s house, the world’s most ineffectual (and temporary) commander. A lot has changed since Command & Conquer released in 1995—but not Command & Conquer, for better and for worse.

Note: I’ve noticed occasional slowdown and stuttering in Red Alert. I’ll be keeping an eye on the early Steam reviews to see if this is a widespread issue. If it is, hopefully it’s fixed quickly. I haven’t had the same issue with Tiberian Dawn.

Dark before the Dawn

The love is evident from the very first minute. When you launch Tiberian Dawn or Red Alert for the first time, you’re treated to incredible reworks of the original installation sequences.

Wait, installation sequences? I guess we should back up and explain, because even the concept of an “installation sequence” is a time capsule straight from 1995. If you weren’t there, you probably have no idea what I mean. Basically, there was a time in the not-so-distant-past when installing a game was marginally more interesting than watching a progress bar slowly fill.

Command & Conquer had some of the best install programs, building the world before the player even touched the game proper. You’d select your sound card, set up your internet connection, tell the game where to install—and yes, watch progress bars fill. They were stylized progress bars though, damn it! Progress bars designed to look like they came from the future, or from an alternate timeline in the case of Red Alert.

Of course, nowadays you install Command & Conquer Remastered through Steam like any other game. As I said though, upon first launching the game you’re treated to updated installation sequences, animations that knowingly stamp “OBSOLETE” on the old internet setup placard and “Upgrade” the visuals to your modern monitor resolution.

And this tongue-in-cheek tone continues into the first mission, where you’re prompted to “Calibrate” your view of the battlefield by hitting Space. Do so, and the game transitions from the original Tiberian Dawn and Red Alert sprites to the new reworked artwork. You can tap Space to toggle between the two on-the-fly at any point, akin to Halo: Anniversary Edition.

Most people will use the modernized graphics, the modernized soundtrack, and the modernized controls—and they should. It’s better that way. The updated artwork is especially impressive. I wouldn’t say Tiberian Dawn was “pixel art,” but it was so low-res Petroglyph risked running into the same issues as remastered pixel art, a la 2018’s widely panned Chrono Trigger remaster.

Some may take similar offense to Tiberian Dawn and Red Alert here—but I don’t think so. The new sprites are faithful to the original series, mimicking the crisper lines and detail of later sequels like Tiberian Sun and Red Alert 2. In other words, it “feels” like Command & Conquer. It “feels” like Westwood at its peak. The art is infinitely more readable now, but it doesn’t feel clinical or sterile like some botched remaster attempts.

If you hate it though? Toggle back to the original sprites. The original Command & Conquer experience is never more than a handful of toggles away, and I think it’s important and worth applauding the lengths Petroglyph has gone in order to preserve the unaltered work, whether for history lesson or nostalgia. Remasters are, or at least should be, as much about preservation as they are modernization.

Unfortunately that also means a lot of rough edges.

Command & Conquer wasn’t the first real-time strategy game. It was very early though, and is generally credited with popularizing the genre. It preceded StarCraft. It preceded Age of Empires. It preceded a lot, and a lot is “missing” or lackluster here as a result: Quality-of-life improvements, mission design, artificial intelligence, balance.

This is to be expected, just as it was to be expected in Age of Empires: Definitive Edition. Command & Conquer popularized a genre that went on to dominate much of the late ‘90s and early ‘00s. Of course the genre grew and evolved as time went on. Of course it got better. Command & Conquer is a foundational game, and an important part of the historical canon. So is Red Alert, for that matter.

But they’re also fairly simplistic by modern standards. Brutally unfair, as well. Missions often come down to building the “deathball,” a formless mass of units, and then sending it headlong into the enemy base. Is it the most efficient way to play Tiberian Dawn and Red Alert? Not really—but it works, more often than not, and it’s usually easier than dealing with Command & Conquer’s unreliable pathfinding.

It’s amazing how fast armies can crumble too. Infantry are particularly fragile, with an entire platoon of riflemen and engineers prone to being crushed under enemy tanks if your attention wanders—or even blown to bits by friendly fire from your own tanks. I’ve restarted more than one mission because I simply ran out of money to build more troops, locked in a tedious stalemate with the enemy. Even more aggravating are the missions where you have a limited number of troops you need to guide through a gauntlet of enemies. It’s easy to end up in an unwinnable position because of one mistimed rocket.

That’s not to say Command & Conquer Remastered is unplayable, or even unenjoyable. There’s something satisfying in how uncomplicated it all feels after years of StarCraft II tech trees and unit upgrades and so on and so forth. Everything in Command & Conquer—buildings, units, vehicles—is constructed from the panel on the right-hand side. No need to jump back to base and track each individual building. No need to keep track of five different resources. No real (or realistic) limitations on army sizes.

It’s nice to go “back to basics,” so to speak, and I’m all for an RTS with less micromanagement. That said, I’m finding Command & Conquer Remastered a bit too simplistic and a bit too unbalanced (especially Red Alert and its overpowered Soviet tanks).

And with any other game, I might’ve stopped playing. I’ve stuck with Command & Conquer though, particularly Red Alert. I haven’t finished either the American or Soviet campaign yet—but I want to, because I’m loving the story.

Command & Conquer’s other claim to fame is of course its live action (or FMV) cutscenes. You may be familiar with Tim Curry’s scenery-chewing performance from Red Alert 3—and if you aren’t, you should be.

Neither Tiberian Dawn nor the original Red Alert are quite as campy, but they’re not that far behind. I mean, come on: Red Alert opens with Einstein traveling back to 1931 to kill Hitler, returning to the present to find the USSR conquering Europe in Germany’s absence. It’s entertaining as hell, sitting in fake-Stalin’s briefing room and watching a bunch of actors in budget costumes cheese through their lines.

It’s some of the best FMV the ‘90s had to offer, and only diminished slightly by the fact Petroglyph couldn’t find the original footage for Red Alert. Tiberian Dawn looks clean, and I imagine they rescanned the original film. In Red Alert though we get AI-enhanced uprezzes of the compressed footage from 1996, which is…well, not quite as legible as you’d hope.

Command & Conquer Remastered is a fantastic revival of two genre-defining games. It’s an important historical document, and it’s the best way to revisit your old memories if you think they’re worth revisiting.

Whether it stands on its own? I don’t think so. This isn’t Age of Empires II or StarCraft—or even Red Alert 2, which I hope EA eventually remasters, and which I think could stand side-by-side with the best the genre has to offer today. Tiberian Dawn and the original Red Alert, as important as they are, simply don’t hold up in the same way. They’re enjoyable enough, but only taken in the context in which they were made.

And that’s fine! This one’s for the fans, and the fans deserve it. Just don’t be surprised if you find yourself wishing for more from Command & Conquer Remastered. The RTS genre’s come a long way since 1995—and now that it’s finally showing signs of life again, maybe there’s more road to travel.

I bet Petroglyph could make one hell of a Command & Conquer 5, given the chance.