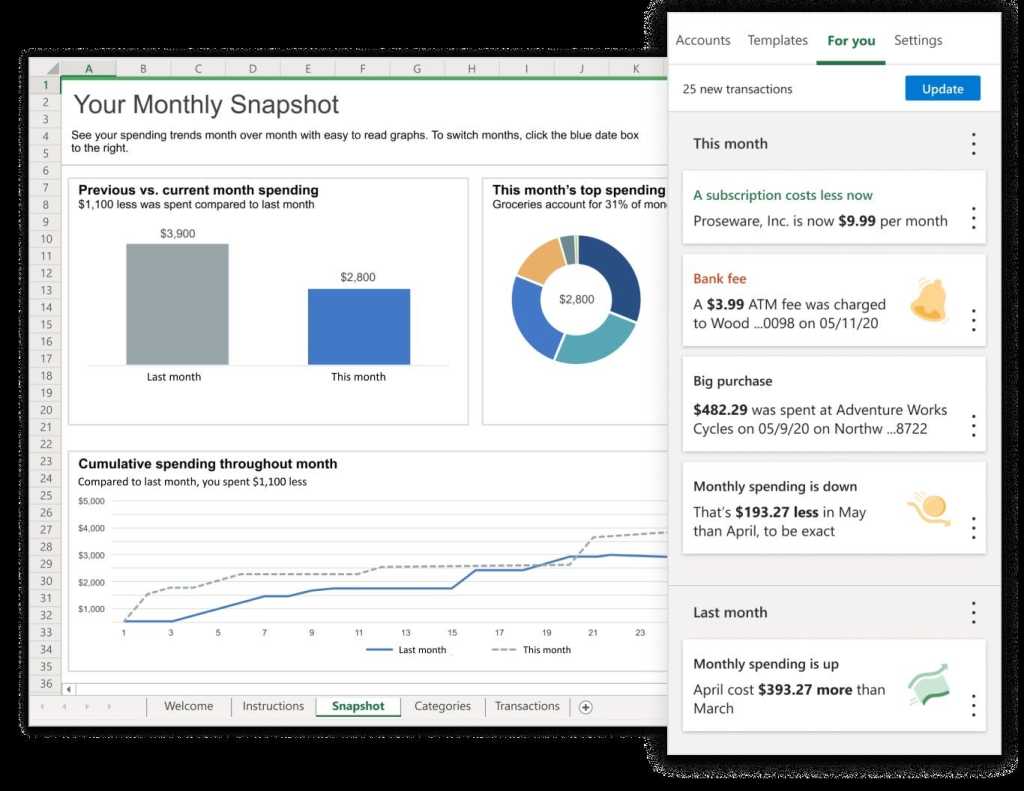 Microsoft has begun rolling out “Money in Excel,” a one-stop dashboard within Microsoft Excel for viewing your day-to-day finances, including bank and credit card transactions.

Microsoft announced Money in Excel in April as part of a broader rollout of a consumer view for Microsoft Teams, as well as a general rebranding of Office 365 as Microsoft 365. Now, Money in Excel is being offered as a downloadable template for either the Excel desktop app or the Excel online version, though you’ll need to subscribe to either Microsoft 365 Personal or the Family plan to be able to use it. (ZDNet’s Mary Jo Foley noticed that the template is now live for download.) You’ll also be able to open the template in the mobile Excel app, but most of the live functionality will be missing.

Microsoft recommends that users store the Money in Excel spreadsheet in their OneDrive Personal Vault, which adds two-factor authentication if it’s not already turned on, and imposes a significantly reduced timeout period.

Money in Excel is not Microsoft Money, though the two products certainly seem very similar. Microsoft discontinued Microsoft Money because of the competition banks themselves offered. “With banks, brokerage firms and Web sites now providing a range of options for managing personal finances, the consumer need for Microsoft Money Plus has changed,” the company said at the time.

Money in Excel consolidates your accounts from various services: your credit card provider, your bank, as well as any investments and retirement accounts you may own. That data is stored and tracked within Excel, using analytics to measure changes in your overall spending, for example, or to track recurring expenses like Netflix that carry over from month to month. (Money in Excel will also alert you if these change, Microsoft says.)

The connection between financial institutions like your bank will be managed by Plaid, which says that it has forged connections with 10,000 institutions across the United States. After granting permission for Plaid to connect a financial account with Money in Excel, Plaid will have access to the account’s balances, transaction history, and associated account information, like owner name and address, but not your Microsoft 365 login credentials, according to a Microsoft support document.

Money in Excel will divide up the worksheet into several tabs: a Welcome tab, an Instructions tab, and then separate tabs for a Snapshot overview, Categories, individual Transactions, and Recurring expenses.

To add an account, you’ll need to go to the Accounts tab and click Add an Account. According to Microsoft, transactions will not update automatically the spreadsheet, though the template will constantly keep an eye out for new additions. An “Update” button will appear if there are new transactions, and clicking it will update the spreadsheet.

Microsoft’s support documents list two important caveats. First, Money in Excel is designed for individual use. If you wanted to share your data with someone else, they’d need to be logged in with your account and have the Money in Excel pane.

Second, there “may be occasions when Money in Excel engineers will need to look at anonymized data to fix a problem or to train our technology to be more accurate,” Microsoft warns. “Access is temporary and monitored.” It’s not quite clear what “anonymized” means in this context, so be warned.

Money in Excel is Microsoft’s entry into the personal-finance app world led by Mint, Quicken, and others. It may not look as pretty to begin with, but Microsoft’s banking (ahem) on its customers’ comfort with Excel to give it an edge.