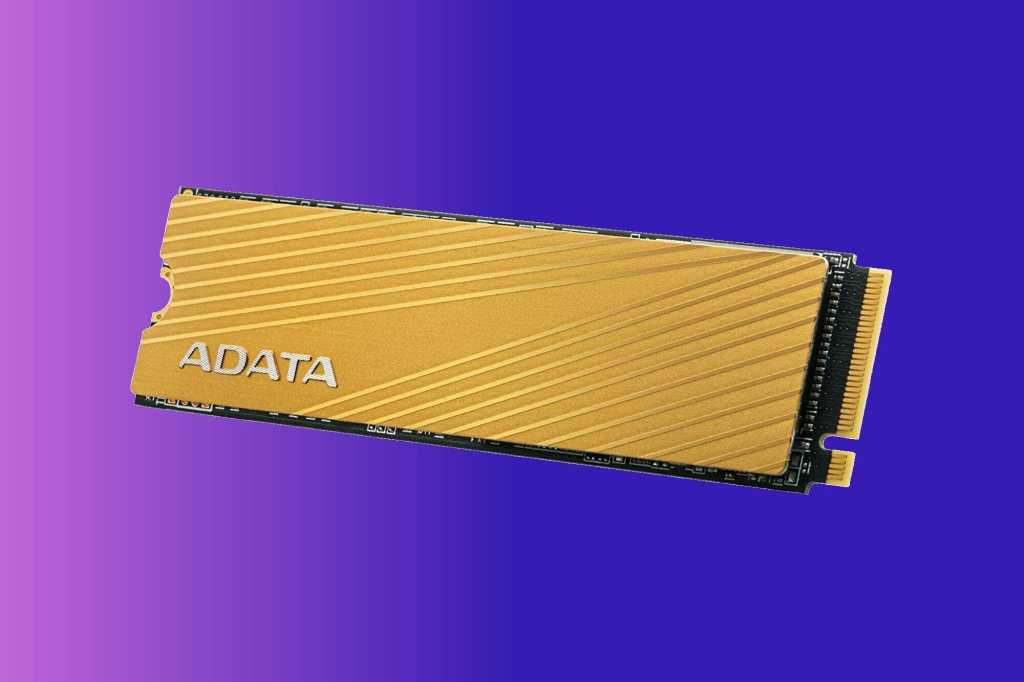 Adata
At a Glance

The Adata Falcon (1TB) is a bargain with excellent read performance for budget builds and lightweight use. But if you’re a pro-level user who needs sustained write speed, look elsewhere.

Though it’s a slow writer by NVMe standards, the 1TB Adata Falcon we tested is a great real-world, everyday performer. It’s also priced below the competition at the moment (currently $157.61 on Amazon). We don’t recommend it for pros or heavy workloads, but it’ll save casual computing types and bargain PC vendors a buck or two.

Despite the lowball pricing, Adata outfits the drive with classy-looking gold heat spreader. That hardly makes the Falcon an SSD you’ll want for heavy-duty use, but it’s a nice touch anyway.

The Falcon employs a Realtek RTS5762DL controller to shuffle data in and out of the 96-layer stacked/layered/3D TLC (Triple-Level Cell/3-bit) NAND. The drives are rated for 150TBW (TeraBytes Written) per 256GB of capacity, and carry a full-five year warranty. That’s a rather low TBW rating, but two years’ more warranty than some.

As the components for nearly all SSDs (and many pre-made products) come from the same few fabs, TBW ratings and warranty are dictated largely by legal and financial concerns. Basically the cheaper the drive, the lesser the guarantee. Note that SSD failure in end-user PCs has proven very rare, so the warranty is not quite the concern it is with hard drives.

I gave away most of the performance story early in the article—fast reader, slow writer. However, while the Falcon’s writing is a tad slothful according to CrystalDiskMark 6, it’s not particularly slow in the real world. Part of the reason for the slow write rating is that there’s no DRAM cache to pump up that operation with smaller batches of data.

As you can see below, the Adata Falcon proved a well-rounded drive (for the price) when it comes to our real-world 48GB transfer tests. Not as fast as some, but faster than Crucial’s P2.

While the Falcon didn’t ace the 450GB write test shown below, it wasn’t tragic either. Note that the smaller 256GB and 512GB capacities will turn in worse times due to having less SLC cache available.

You can see from the capture below that while the Falcon is good while there’s sufficient cache, it’s very slow (250MBps) when it runs out. This means the smaller 256GB and 512GB drives with smaller SLC caches will slow down sooner and take longer when writing large files.

Note also that as any drive fills, there’s less NAND available to treat as cache, and you’ll see the same drop in performance.

A bargain for the average user

If you’re not the type that writes large amounts of data often, the Falcon can save you a buck or two and still deliver top-notch everyday performance. However, my standard beef with bargain drives still applies: They simply don’t save you that much money compared to a more consistent performer such as Kingston’s KC2500.