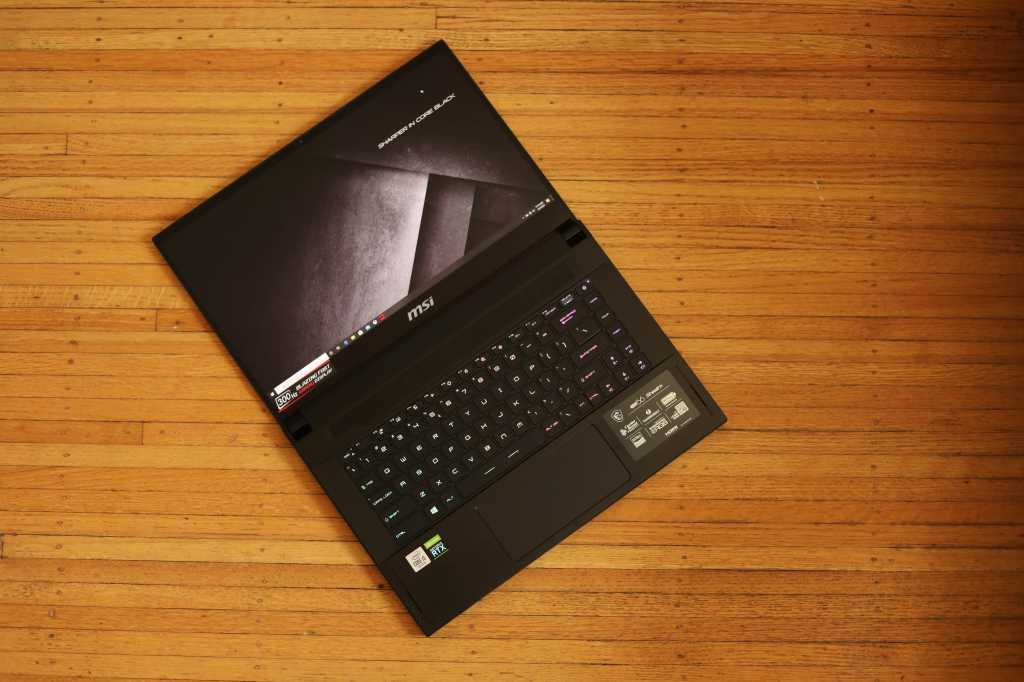 The MSI GS66 Stealth is an impressively thin and light gaming laptop with solid performance, but our high-end configuration probably strained the thermal limits of the design. A dialed-down configuration will probably deliver better bang for buck.

The MSI GS66 Stealth is the latest GS-series laptop from the company, and it continues the tradition of pushing the envelope on thin-and-light gaming machines.

With the GS66 Stealth, MSI redesigns the trend-setting GS65 Stealth to be, well, a bit stealthier—and stylish. Gone are the red-and-black logos that screamed ‘gamer,’ as well as the gold accents of the two previous designs. The new GS66 (currently $2,999 on Amazon) is designed to slip right into those boring corporate meetings with other sedate black business laptops. Once you’re off the clock, it screams with all the might you’d expect from an Intel 10th-gen, 8-core Core i9-10980HK and Nvidia GeForce RTX 2080 Super Max-Q GPU. Keep reading to find out more about this trendsetting gaming laptop.

As you read through the specs for the GS66 Stealth, remember that this is one of the thinnest gaming laptops available. The GPU is a power-efficient Max-Q design, but otherwise there are few compromises packed into this slender body. 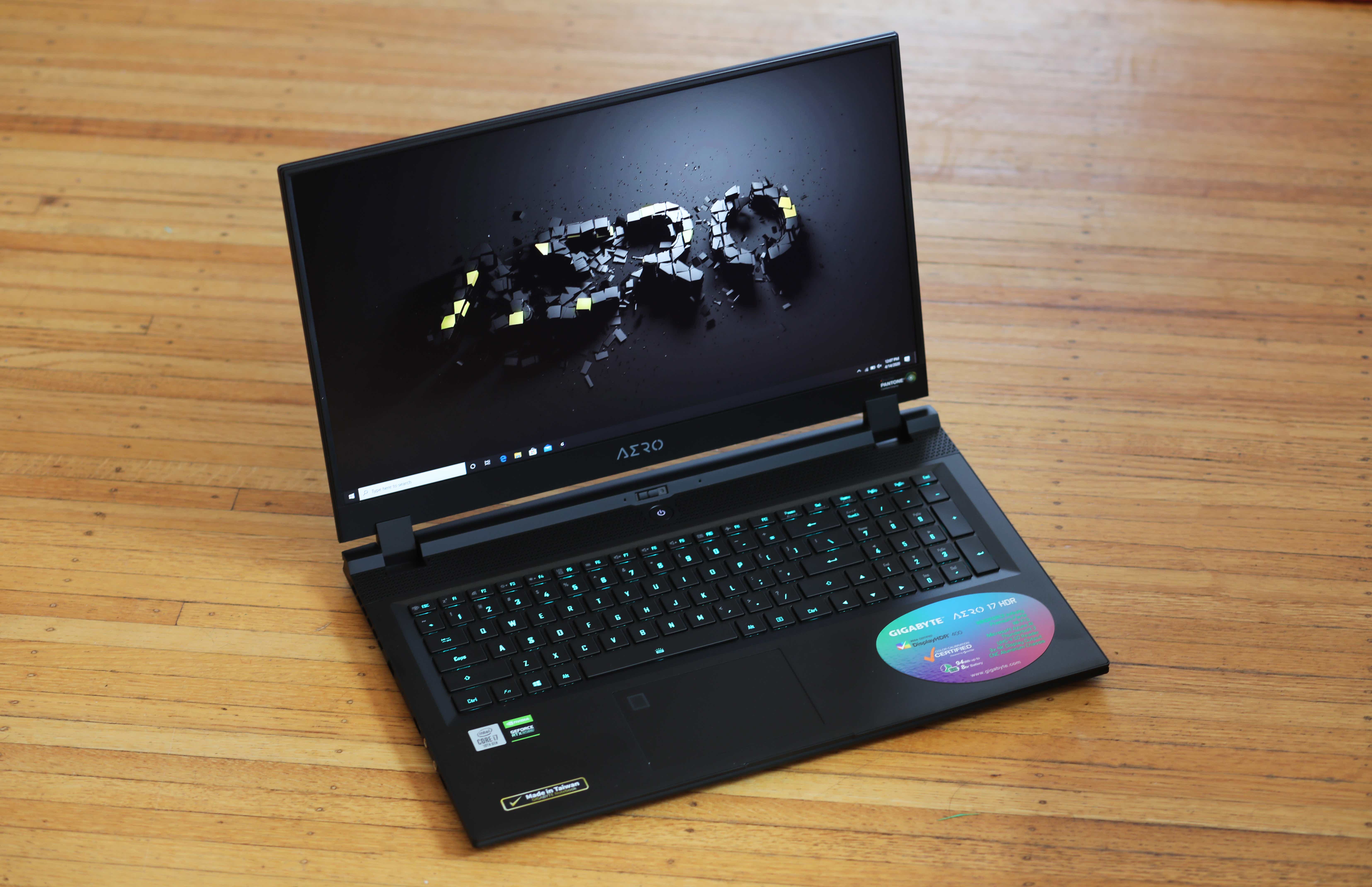 The best way to describe the generous port selection on the GS66 Stealth is with photos. On the left side, as shown below, you’ll see (left to right) the dedicated charging port, Thunderbolt 3, HDMI 2.0, and SuperSpeed USB 10Gbps Type-A.

One thing the GS66 Stealth lacks is an integrated SD Card reader. But we understand space is at a premium. When you add up everything on the right side (below), we like what you get instead: two more SuperSpeed USB 10Gbps USB-A, a SuperSpeed 10Gbps USB-C, analog headset jack, and nicest of all, a Killer NIC E3100-based 2.5Gb ethernet port.

We’re mostly kidding, but times are changing. While we used to believe that high-refresh-rate gaming monitors were only useful for those with bionic vision and lightning reflexes, we’ve since found that higher refresh rates make a huge difference for anyone. The more information you see on the screen, the better chance you have of making the shot in a game. Actually, any content that is scrolled on the screen and refreshed can benefit from a reduction in the blurring we’ve all just gotten used to with LCD screens.

To see if our eyes could tell, we went to Blurbuster’s Testufo.com. Blurbusters has long been a pioneer in the push to reduce blurring during motion. For comparison we set up side-by-side with the GS66 Stealth a 15.6-inch gaming laptop with a 144Hz panel, and a 15.6-inch 4K 60Hz gaming laptop. We then used Testufo.com to scroll a simple, 80s-era-like UFO animation on all screens, as well as Testufo.com’s Moving Photo test. (You can run the tests yourself by using Chrome and going to Testufo.com).

The 4K, 60Hz screen was the blurry mess we expected. The 1080p, 144Hz panel was markedly better. But yes, the 300Hz, 3ms panel in the GS66 Stealth put both to shame, displaying the scrolling photo with near tack-sharpness to our eyes. Our eyes say it’s worth it if your enemy is blurring.

One sin of previous 15.6-inch GS-series laptop designs was the use of inverted motherboards, which had to be removed entirely to access the SSD and RAM. With the new GS66 Stealth, no such gymnastics are needed—just pop off the bottom panel, and the two SO-DIMM slots and two M.2 slots are right there.

The keyboard on the GS66 is slightly mushy, but overall we’d say it’s fine. The trackpad is oversized and continues to be centered a little too far to the right for our fat palms. Palm rejection, however, is quite good. The Microsoft Precision-enabled trackpad is works smoothly and responsively.

MSI likes to highlight that the GS66 Stealth’s speakers feature vents aimed at the user, while other laptops choose to fire the audio to the side or bounce it off the table. Unfortunately the audio is still pretty mediocre. We know it’s hard to jam all this hardware into a thin laptop, but MSI seems to have shrugged off the audio.

MSI does somehow fit a Windows Hello biometric camera into the GS66 Stealth’s slender bezel. Most gaming laptops choose fingerprint readers or give up on biometrics entirely, so having a Windows Hello camera in a gaming laptop is welcome. Image quality for your Zoom video conferences is fair—it’s a 720p video camera, the same resolution you’ll find on the vast majority of laptops out there.

With the GS66 Stealth we were honestly concerned whether you could jam a Core i9 with an RTX 2080 GPU into a sub-5-pound, 15.6-inch laptop without compromise. After all, these must be a reason why so few vendors have tried this before.

As modern performance laptops are often tuned to be quieter and cooler out of the box, we tested the GS66 Stealth using both its default “Balanced” performance mode and its “Extreme” setting as well. You’ll see the results from both settings below.

We’ll kick this off with the now-elderly Cinebench R15 test, which measures multi-core 3D modelling performance. Note that the default Balanced performance of the GS66 Stealth (the shorter red bar below) is a bit underwhelming. That’s because MSI reduces the fan noise in this setting to keep users happy, which forces the laptop to throttle CPU performance to keep cool. In this case, MSI plays it perhaps too conservatively.

Note that when we first received the GS66, default multi-core performance was far better—but it also kicked fans on far sooner. The company pushed out a BIOS and firmware update to address complaints, and the result on default is the shorter red bar you see below.

Fortunately, when you set the GS66 Stealth to Extreme, it starts to come to life—see longer red bar above. While it doesn’t push aside the two far larger Intel laptops (nor that pesky AMD one), it’s about what we’d expect for a laptop this thin with an 8-core Core i9 inside.

We used Cinebench above to get a general feel for multi-core performance, but the vast majority of applications are single-threaded—and Cinebench can measure that, too.

The story here is a bit different: The GS66 Stealth pulls its weight and is outpaced only by three 17-inch laptops. But as you can see, the results are all so close, it’s be hard to tell the difference based on single-core CPU performance for most tasks. The shorter red bar below is the Balanced result, while the longer one is the Extreme result.

While the “Extreme” setting creates more fan noise, we observed that the Gigabyte Aero 17, when set to its top performance setting, is even louder than the GS66 Stealth.

Because the Cinebench test is brief—basically a sprint, we run a second CPU test that’s more of a marathon, so we can see how the CPU performs under extended load. For that we use the free HandBrake video encoding utility to convert a 30GB file using the Android Tablet preset.

In this test, shorter is better. The result is again good when set to Extreme (the shorter red bar above), but somewhat less so when set to its default Balanced. The GS66 Stealth also struggles to keep up with the Gigabyte Aero 17, which is an 8-core chip but a step lower (Core i7-10875H). That Ryzen 9 4900HS doesn’t help either.

The GPU matters more for gaming, so keep reading for graphics results.

To get a feel for the graphics performance of the MSI GS66 Stealth, we’ll kick this off with 3DMark Time Spy’s DirectX12 graphics test. It’s a synthetic test, but respected and also very repeatable. The graphics sub-score excludes CPU performance and measures just the GPU.

The result is good, but not that much faster than anything else. Perhaps worse, it’s running neck-and-neck with the XPG Xenia 15 (which we’ll soon review), with its RTX 2070 non-Super. In mostly older tests such as FireStrike, which is a DirectX 11 test, the GS66 Stealth just can’t open up any space between itself and other similar-sized laptops with lower-tier GPUs.

In 3DMark’s Port Royal Ray Tracing test, the song was about the same. The GS66 Stealth’s performance was good, but it was looking over its shoulder most of the time.

We did run a few games, such as the older Rise of the Tomb Raider,  a DirectX 11 title. The GS66 Stealth is again in a good position and offers plenty of performance, but we just expected more.

Perhaps the most important test for any laptop this light (and yes, 4.6 pounds is light for this much hardware) is battery run time. For this test we set the laptop’s display brightness to 250-260 nits, enable airplane mode, and insert earbuds with the volume at middle setting. We then loop a 4K video using Windows 10’s Movies & TV app. We also set the GS66 Stealth to its Power Saver option, which we think most would do if they were truly trying to stretch out the battery.

The result is a very good finish, with nearly 7 hours of run time. Your mileage will vary, and this test is pretty lightweight. If you were to say browse the web, you should expect to shave off a quarter to a third of that battery life. If you were to encode a video or do intensive CPU tasks, cut it to just two hours. If you fire up that GPU, you’ll probably be luckily to get more than 90 minutes.

Still, this is very good performance in battery life for a gaming laptop. MSI clearly wrings everything it can out of that 99.9-Watt-hour battery.

Should you buy the MSI GS66 Stealth?

If you glance back at the charts above, the MSI GS66 Stealth posts solid performance overall, especially considering its weight and size. The problem is when you consider the pedigree of the components inside—Core i9 and RTX 2080 Super—as well as the price as configured, we hoped for more.

The reason, of course, is how thin the laptop is. We measured our unit at just about 19mm. That’s maybe 1mm to 2mm thinner than competing designs we’ve seen, probably enough of a damper on thermal performance to prevent that Core i9 and RTX 2080 Super from stretching their legs fully.

All three configurations come with that sweet, sweet, 300Hz panel, which might be worth the price at any configuration.