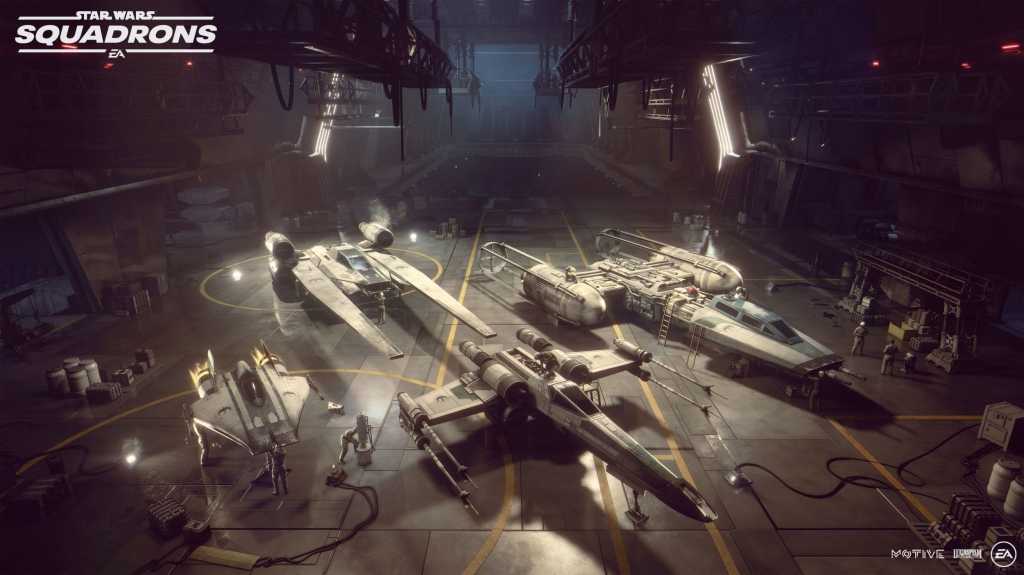 Hey, at least one part of E3 remains intact in 2020! Thursday night marked the debut of EA Play 2020, which usually is held in a hot parking lot in Hollywood and this year was held in Andrew Wilson’s surfboard room.

Anyway, EA kept it to a tight 45 minutes, and a big chunk of that was spent hyping up older games that came to Steam earlier in the day. We’ve rounded up the few new game announcements below though, including news of Skate 4, new Star Wars: Squadrons footage, It Takes Two, and Lost in Random.

Okay, not the most exciting start maybe. Apex Legends continues to truck along with Season 5, and I’m sure it’s still a great game and everyone loves it. But damn it, I came here for the new games. Anyway, Apex quickly detailed a “Lost Treasures” event starting on June 23. Also, Mirage is getting a statue of himself as a weapon, which is pretty damn fun.

The biggest news: Apex Legends is coming to Steam this fall and gaining cross-play across all platforms. Maybe I’ll finally remember to play it occasionally.

I missed Josef Fares. It’s been a few years since our favorite loud-mouthed auteur’s been allowed out and about, with his studio’s A Way Out released in March 2018. Like A Way Out, Hazelight’s new project is pushing cooperative mechanics to the forefront. Titled It Takes Two, we didn’t see much in-game footage, but I can’t wait to see what Fares and Co. have in store for us. I didn’t even like A Way Out that much, but I respect it.

“It’s a coming-of-age story, set against the backdrop of a mysterious world.” Like It Takes Two, we didn’t see much of Lost in Random. The Fe follow-up is still early in development. That said, I love the art style. It reminds me of claymation classics like Nightmare Before Christmas, and the anthropomorphized board game pieces are very cute.

Rocket Arena still feels very strange. They just…took the idea behind everyone’s favorite Quake mod and made it a game. Didn’t even change the name. I mean, Dota 2 certainly set a precedent, but it still feels strange. If you’re looking for a new hero-based shooter though, Rocket Arena’s got a unique mechanic and style. It definitely looks like they’ve spilled some Fortnite in this Quake mod, but I like the grappling hook at least.

We already saw Star Wars: Squadrons on Monday…for some reason. Yes, one of EA’s only real announcements, dropped three days before this event. That weirdness aside, today’s showcase was a bit more extensive. We got some honest-to-goodness extended game footage, both the singleplayer and multiplayer.

EA confirmed the campaign will cover both the New Republic and Empire, so it’s essentially your X-Wing and TIE Fighter successor in one package. The ship interfaces look delightfully chunky, with readouts covering speed, ammo, and more. I’m still not convinced this is as simulator-heavy as X-Wing, but it’s closer than I expected. The multiplayer modes look pretty much like you’d expect, especially if you’ve played Battlefront II’s space battles. I’m still curious whether 5-on-5 is enough players, but other than that it looks like a solid dogfighting game.

And hey, with full VR support, maybe this will be the big-budget follow-up to EVE Valkyrie that I’ve been waiting for. I’m very curious what the campaign cinematics will look like in VR, that’s for sure.

Any other year, Fifa and Madden would get a collective shrug from me. “Hey, EA still makes sports games,” right? But this year it’s actually weird that EA is making sports games, because there are no damn sports. I don’t know how you make Madden 21 when you’re not even sure there will be a football season in 2020-21. It’s just…bizarre.

Remember that time EA held an E3 press conference and was like “No, we’re totally working on more games” and showed us a bunch of footage from Maya? Well, they did it again. EA Play 2020 “ended” on a weird hype reel for EA’s next-gen games, with strange prototypes for DICE’s next project, a teaser for Dragon Age, and more. So uh…that exists.

And then they revealed Skate 4! I mean, they did it in the same silly “We’re making a game and we can’t even show you anything” way that they did for Dragon Age and DICE and the rest. But oh wow, Skate 4! After an entire generation of people commenting on every Instagram story and Twitter post EA made, they finally did it!

Of course, if you can’t wait…three? Four years? There’s always Skater XL and Session. The latter even has a Skate-inspired control scheme for converts. But hey, a real Skate 4! We did it!