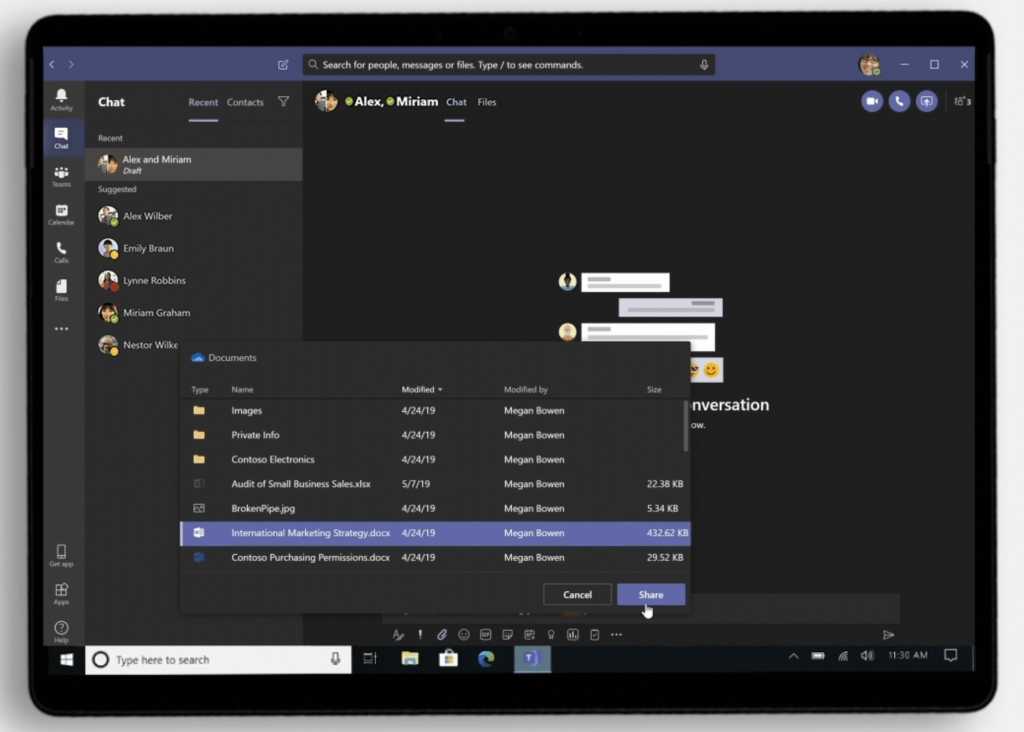 Microsoft said Wednesday that it’s making OneDrive file sharing more manageable, adding a convenient way to share folders and files with friends, while giving business users more control over a file as it moves through an organization.

“Sharing” a file or folder seems simple, but it’s really not—not when you (or your company) needs to decide who has access, and what happens when things move locations. Negotiating all of those requirements is the foundation for the OneDrive changes Microsoft announced Wednesday.

Microsoft already allows you to right-click a file within OneDrive for the web and share it with specific contacts, with permissions that include edit controls, passwords, and the like. What Microsoft calls “family and group sharing” will arrive on OneDrive for the web later this month, with general availability coming in July. Essentially, Microsoft seems to think that configuring each folder or file is too time-consuming, so it’s allowing you to predefine a “family” group or circle of friends beforehand.

That sounds easy, but setting it up is complex. You’ll first need to define a family group of individuals with Microsoft accounts, just like you can do to limit your kids’ screen time within Windows or the Xbox. Creating a group of friends is even more of a pain, requiring you to go into Outlook.com. After all that, you’ll have predefined groups with which you can share files and folders on the web.

Granted, Microsoft’s new consumer controls assume a world where photos and videos aren’t already shared by text, messaging apps or social media. It’s also not universal yet: the feature will be added to the OneDrive mobile app, sync client, Mac, and directly from Word, Excel, and PowerPoint by the end of this year.

Companion to this announcement, Microsoft is increasing the size of uploads from 20GB to 100GB, as well as adding dark mode to OneDrive for the web.

OneDrive for the enterprise is constantly negotiating a fine line between sharing documents in the spirit of collaboration, and preventing them from being “shared” to competitors outside corporate walls.

A new feature called Add to OneDrive straddles that line. Like Microsoft’s new consumer controls for OneDrive, “Add to OneDrive” takes an existing feature and broadens it. Within OneDrive for the web, there’s already a “Shared with Me” heading that lists files that others have shared with you. (The Office app for Windows does the same.) “Add to OneDrive” lets you to take a file under the “Shared with Me” heading and create a shortcut to it within your own list of OneDrive files. It doesn’t change anything else about the file, though, leaving all of its permissions in place.

Those permissions become even more important as a file moves through a development process. Take a planning document: While it may exist as a file shared between a small workgroup of employees, eventually it may evolve into a document a legal team and senior management may want to review.

Later this summer, the permissions of the file, as it’s moved from a OneDrive folder with one group of participants to another folder with a different group of participants, will be automatically reconfigured, so that both groups will have access to the same file. If necessary, OneDrive will send out new file links—which sounds like a pain for users to track, honestly.

Microsoft said it’s working to extend OneDrive’s file sharing and access control to Teams, so that you’ll be able to assign files and permissions without leaving the app. Conversely, Microsoft said it will allow users to turn off notifications on new files beginning later this year, to minimize distraction. Users will also be able to share files as a URL, rather than require the actual filename be used.