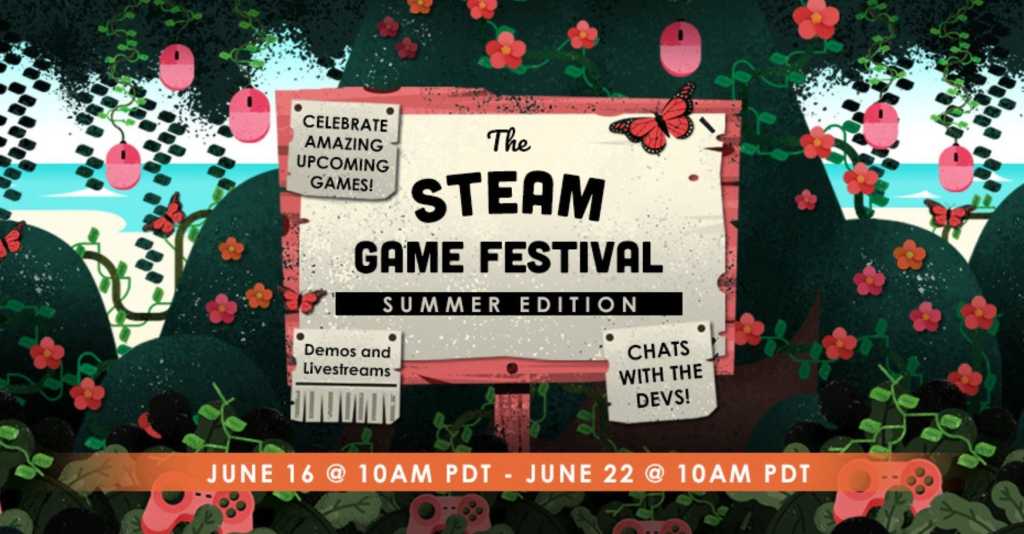 The Steam Summer Game Festival is massive. Like, really massive. The first iteration in December offered about a dozen demos, and the March event touted 50, but now? The Summer Game Festival apparently features over 900 demos—shooters, strategy games, puzzle games, visual novels, and so much more, all vying for your attention in E3’s absence.

It’s daunting. Where do you even start? And since it’s all free, there’s an argument to be made that you can start…anywhere. Grab whatever catches your eye! But if you’re looking for a bit more direction, or if you’re just scared of missing something interesting, read on for my personal recommendations.

Note: I’ve tried to stay away from demos that we’ve covered before, like Backbone and SkateBIRD. Those games are great though! Go play them! Now, without further ado…

Ultrakill is the platonic ideal of a New Blood shooter. Given New Blood’s other projects, I already knew what to expect: A retro-inspired shooter where you move fast and shoot faster. I’ve played Dusk, I’ve played Amid Evil.

But Ultrakill feels even faster and more over-the-top. You can punch projectiles back at foes, or simply rip them in half. You can wall jump and you can slide. You can fire the pistol through glass floors and watch cohorts of enemies plunge into the void. It’s stylish and I’m already enjoying chasing higher ratings in the demo levels.

You should check out New Blood’s other demo as well, if you want a breather. Inspired (at least in part) by the original Thief, Gloomwood is a quieter stealth-focused affair and definitely worth the download.

Inkle’s made a name for itself by turning out some of the best writing the industry has to offer, between 80 Days, Sorcery!, and Heaven’s Vault. That makes Pendragon an interesting digression, as the first Inkle game to put a serious focus on combat. Your journey takes place across a series of turn-based tactical encounters, interspersed with dialogue, and it reminds me a lot of The Banner Saga—but stripped down and simplified somewhat. The demo felt fairly straightforward so I’m curious whether it has staying power, but wrapped around the outside is an ever-changing story of King Arthur and the Knights of the Round, and I’m definitely interested in seeing that through even if the combat hasn’t hooked me yet.

The opening of Genesis Noir is brilliant. I’ve never seen anything like it. The first five minutes emulate the look of a classic film noir, with multiple exposures layered over one another so that city and windows and music notes and abstract shapes all weaving in and out while jazz quietly plays in the background. It’s slick as hell, and that melding of music and magical realism and old-school point-and-click tropes continues through the rest of the demo with train tracks played like a jangly keyboard and a city willed into existence by the power of jazz. I love it.

My dad and I used to build model airplanes when I was a kid. I have fond memories of twisting all the tiny plastic pieces out of the molds, snapping them together, then painting with the most horrific-smelling (and yet somehow tantalizing) paints in existence.

Thus I jumped at the chance to try Model Builder, which lets you construct and paint two airplanes: a P51 Mustang and a Messerschmitt. The P51 is one I remember building, so it’s cool to see it here. All the basics are available in the demo. I only hope the final version is a bit more tactile. Right now, for instance, you pop out pieces by simply clicking little dots. I’d love to get in there and wiggle them, or wield a razor blade to cut them free. I hope constructing the model is eventually more involved than dragging a piece into place. But for a proof of concept? This is a solid start.

Don’t judge a book by its cover, right? And yet I’ll admit, I downloaded Arrog solely based on its screenshots, and I was not disappointed. With a pen-and-ink style that reminds me of Cyan’s classic The Manhole, Arrog is less about the puzzles and more about clicking on everything and seeing what happens—and what happens is invariably breathtaking and surreal.

Solasta: Crown of the Magister

Solasta: Crown of the Magister is one of the more traditional games on this list. An isometric CRPG,Solasta’s play for attention is that it uses the Dungeons & Dragons ruleset. It doesn’t use the Forgotten Realms setting—Solasta isn’t an official Wizards of the Coast production—but it uses the classes, the combat rules, and the all-important D20.

In other words, Solasta’s working from the same basic template as Baldur’s Gate III. The writing and voice acting aren’t quite on par with Larian, from what I’ve seen, but it’s a surprisingly faithful and full-fledged attempt at adapting D&D to digital, and I’m definitely curious how it ends up.

When I was a kid, everyone wanted to be a paleontologist. Blame Jurassic Park, I guess. I let those dreams die so I could grow up to, um…write about video games, but some part of me is still that six-year-old kid with an encyclopedic knowledge of ancient and extinct lizards, and Dinosaur Fossil Hunter plays right into those fantasies.

It turns out I probably made the right choice, as fully two-thirds of my time with Dinosaur Fossil Hunter involved running back and forth with a Ground-Penetrating Radar cart looking for fossils to dig up, and finding nothing but dirt, dirt, and more dirt. Still, I love a good tedium simulator—as evidenced by my affection for Car Mechanic Simulator and the like. I could see myself getting really into hunting down dinosaur bones, provided the mechanics get tightened up a bit here.

The theme of this list is “Real-World Activity Simulated Down to the Most Monotonous Details,” and SuchArt! is another such entry. There’s a weird story layered on top of SuchArt! about Earth’s decline and our robot-dominated future, but at its core this is just a painstakingly realized art studio. And I don’t mean that in the typical PC sense, like this is a gamified PhotoShop. SuchArt! wants you to mix your own paints, put brush to canvas (or wall), and really experience the act of creating artwork. I’m hoping to settle in with Bob Ross and paint some real beauties in SuchArt! at some point. That paint knife is begging to sketch in some mountains.

Chicory: A Colorful Tale is a blend I’ve never seen before. It looks and even plays a little like a Zelda game, but the main mechanic is…coloring? The entire world has been drained of color, and it’s your job as Wielder (of the Paintbrush) to fill it back in. You only have four colors at the start of the demo, but even so it’s satisfying—and more than a little relaxing—scrawling the brush across the landscape and watching it turn green and purple and salmon and blue. The adventuring aspect’s not half bad either, with your efforts aided by an entertaining cast of animal friends. This one seems like it’ll be special.

To write about Buddy Simulator 1984 is to spoil it, at least a little bit. This is one of those experiences that’s best if you go in blind, like Doki Doki Literature Club. In fact, Buddy Simulator 1984 uses similar tricks, part of a class of horror games that seem to know too much, that go beyond the bounds we usually draw between “Game” and “Reality.” It’s both entertaining and unsettling.

Anyway, where Doki Doki Literature Club came in the guise of a visual novel, Buddy Simulator 1984 arrives looking like software from the early ‘80s. You even need to “run” the program like you would on an Apple II or Commodore 64. And I like a demo that’s self-aware about being a demo, so the ending of Buddy Simulator 1984 is a real joy. It stands on its own, whereas most of the demos on this list are merely a teaser for a larger story or game.

Metamorphosis is silly. There’s no getting around it. To stripmine Kafka’s classic novella for inspiration and come away with “Wouldn’t it be interesting to play a game as a beetle?” is ludicrous. Video games, eh? They’re wild.

And yet if we don’t take it all so seriously, I have to admit: It makes for an eye-catching demo. Skittering across oversized chairs, across pencil-bridges and up book-cliffs is definitely a unique experience, and the strongest part of Metamorphosis so far. I’m not sold on the Kafka homage and honestly don’t think I ever will be—they might as well adapt The Grapes of Wrath into a farming simulator or something—but story aside, I’m interested in spending more time with a bug’s eye view.

Speaking of bug’s eye views, Obsidian’s Grounded offers something similar—albeit from a more human perspective. Like Inkle, I come to Obsidian’s games mostly for the writing, and I was pretty skeptical when I heard about Grounded. A survival game? From Obsidian? Meh.

But the Honey I Shrunk the Kids vibe has officially won me over. I’m tired of grim you-against-the-elements survival games, tired of chopping down trees and crafting wooden shacks. Grounded merely recontextualizes those same well-worn mechanics, but it’s a lot more fun chopping down enormous blades of grass and collecting mushrooms while dodging angry ants. Now if only they could get Rick Moranis to do some voice work.

Microsoft Flight Simulator is right around the corner, but how about something a bit smaller in scope? Something more…hand-made?

Balsa Model Flight Simulator is a bit like small-scale Kerbal Space Program, which makes sense because it’s (surprise!) from one of the leads on Kerbal Space Program. But where Kerbal sent players into space, here you’re building radio-controlled gliders and airplanes from kit parts, then launching them out over beaches and other picturesque locales—and then, in true Kerbal fashion, watching them crash. The part selection in the demo is fairly limited and the interface needs a lot of work, but the construction tools seem powerful. You can resize any piece, even customize the sweep of the wings or how the leading edge tapers. It’s a dream for anyone with an interest in aeronautics, even if the planes are pint-sized.

Moncage is almost certainly inspired by Gorogoa, and that’s okay. It features the same core mechanic, lining up parts of two different images to form a functioning whole. For instance, the bike wheel in one image may become the missing part of a gear in another, allowing a mechanism to spin. The key difference? Where Gorogoa worked in hand-drawn 2D, Moncage embeds tiny dioramas in the faces of a cube. You’re constantly spinning the cube in circles, peering into the small-scale scenes and trying to spot how two faces relate to each other. It’s very clever—and I’m not just saying that because I got stumped by one section.

Roki’s demo is brief. Too brief, if I’m being honest. Still, of all the “Wow, that was short…” demos I’ve played this week, Roki made the biggest impression.

It’s the art, really. Roki draws upon Scandinavian folklore for story inspiration, with trolls and a many-eyed tree and of course the giant wolf from the trailer. But it’s Eyvind Earle who I kept thinking of while playing. Maybe it’s the trees, those thin and straight trees lightly covered in snow. Or maybe it’s the manor house, dappled with afternoon sunlight and covered in intricate shingles. I’m not sure the exact reason, but I know it’s gorgeous and I can’t wait to see more of this world. Best of all, it’s out in July.