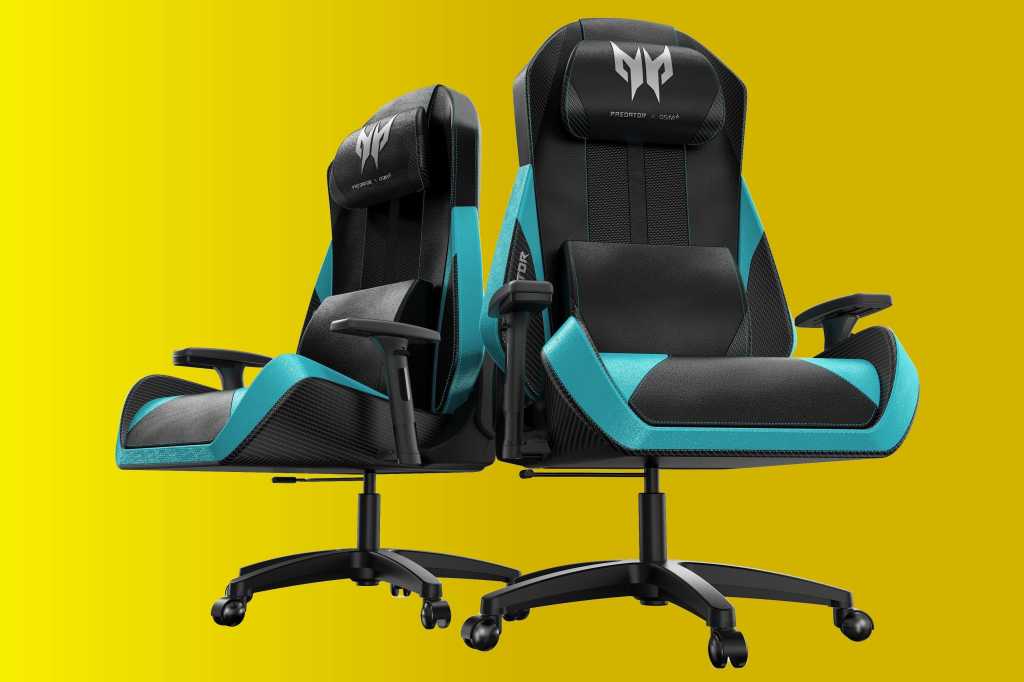 Acer’s Predator overhaul isn’t just for laptops. During the company’s next@acer event on Tuesday, the company unveiled a slew of desktop gaming products sure to entice DIY enthusiasts and folks who prefer the simplicity of prebuilt systems alike, spearheaded by a G-Sync display capable of hitting a ridonkulous 360Hz, and a gaming chair that can give you a massage while you frag.

The Acer Predator X25 enters the fray after Nvidia announced 360Hz monitors at CES 2020 earlier this year. This 24-inch, 1920×1080-resolution display would be plenty smooth on its own thanks to its preposterous 360Hz refresh rate, but Acer also includes the latest iteration of Nvidia’s G-Sync technology. Together, every game should feel impressively smooth if you’re using a GeForce GPU.

The Predator X25 performs some other nifty tricks, too. Acer’s LightSense technology detects the amount of ambient light in the room and intelligently adjusts brightness based on your environment, while AdaptiveLight tinkers with the monitor’s backlighting to match the feel of your room. Heck, this monitor can even encourage you to take a break during extended play sessions. (Fingers crossed these can all be manually disabled.)

Acer didn’t reveal availability information, but a 360Hz G-Sync display that automatically adjusts to your surroundings is likely to cost you an arm, a leg, or both. If you don’t need absolute bleeding-edge gaming frame rates, the company also revealed a slew of new Predator XB3 gaming monitors.

Regardless of the technicalities, these should be fine displays. The Predator XB3 lineup ships with up to 240Hz refresh rates and 4K resolutions, depending on the model. Acer says they’ll be DisplayHDR 400-certified as well. Standard aside, 400 nits isn’t anywhere bright enough for true HDR visuals, but it still makes for a very vibrant gaming display. These also include the AdaptiveLight tech for eye comfort. Acer says they’ll offer up to 178-degree viewing angles, which suggests they’ll be IPS-based panels.

The Predator XB3 monitors will start at $430 when they debut in the United States in September.

You’ll need a PC to power those impressive displays, of course, and Acer’s happy to sell you one if you don’t want to roll your own. The most powerful rig, the monstrous Predator Orion 2000 with dual GeForce RTX 2080 Ti GPUs and a Core i9 processor, sadly isn’t being made available in North America—at least for now. But Acer also revealed two more moderately priced desktops for American gamers: The $1,000 Predator Orion 3000 and $800 Nitro 50, both slated to land in September.

The Predator Orion 3000 pairs a 10th-gen Core i7 processor and a GeForce RTX 2070 Super inside a mid-tower case—a solid combo for the price. Acer plans to offer up to 64GB of 2,666MHz memory, a 1TB PCIe NVME SSD, and dual hard drives for mass storage, because games sure aren’t getting any smaller. It’ll come with a pair of Predator FrostBlade fans, an optional glass side panel to show off the interior, and plenty of customizable RGB lighting on the fans and front of the system. If there ain’t RGB in 2020, it ain’t a gaming rig. The Orion 3000 should also perform well on the connectivity front, with Killer ethernet and Intel’s Wi-Fi 6 technology.

The more mainstream-focused Nitro 50 packs up to a Core i7 and a GeForce RTX 2060 Super into its decently compact case, which features red LED lights. It’ll also offer up to 64GB of RAM, FrostBlade cooling, and solid storage options via a 1TB NVME SSD and two 3TB hard drives.

Most interesting is the Acer Predator Gaming Chair x OSIM, a black carbon fiber and leather gaming chair that features built-in Bluetooth speakers and can rub your weary muscles in between Valorant rounds.

“The new Predator Gaming Chair x OSIM gives a relaxing massage that leverages OSIM V-Hand ™ Massage Technology to emulate the agile hands of a professional masseuse on the user’s neck and shoulders,” Acer’s press release says. “Together with other massage techniques such as knead, press, roll and tap that cover the entire back, this gaming chair has been specially designed to decrease tension and optimize physical comfort during or after gameplay.”

You can adjust the placement of the rollers to fit your body type, and it comes with three automatic massage programs that target your neck and shoulders, lumbar, or “energize.” This isn’t your average gaming chair, in other words, but Acer hasn’t announced any pricing or release date info.

Getting back into more traditional accessories, the Predator Cestus 350 expands Acer’s gaming mouse options with a more curved and natural-looking mouse than its aggressively tuned sibling, the Cestus 500. With 16,000 dpi, five customizable profiles, eight programmable buttons, and fast 1ms /1,000Hz wireless connectivity, it checks all the right boxes, though we’ll need to get our grubby paws on the mouse to see if it can justify its sky-high $125 price tag.