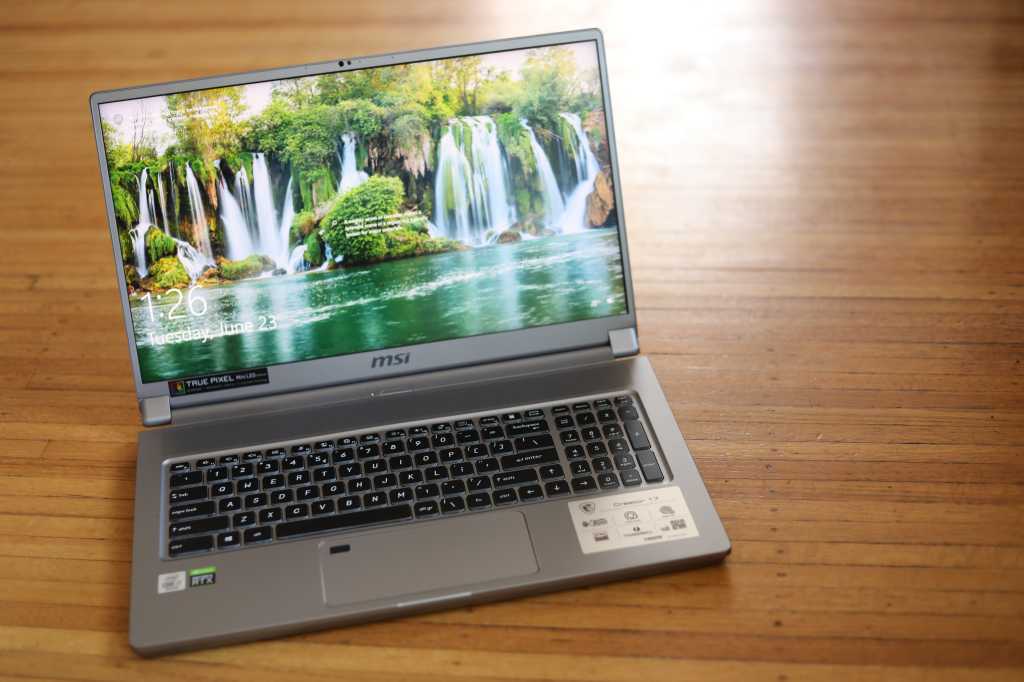 With the MSI Creator 17, we have seen the light. As the name implies, the laptop features a 17.3-inch, 16:9 screen with a UHD 4K resolution panel. But it’s not the size, nor the resolution, that matters here. As the first laptop in the world with a miniLED screen, it’s crisper and brighter (can you say 1,000 nits?!) than anything we’ve seen before.

Typical laptops use standard LEDs that are larger and limit the density in a laptop screen. A typical display LED might be 2mm in size.

A miniLED could be a tenth the size of that conventional LED. Being able to pack LEDs closer together inside of a display means the potential for more zones, which gives you blacker blacks, and increased contrast, too.

For a quick comparison we set up Gigabyte’s Aero 17 with its HDR 400, 4K and 10-bit panel next to the Creator 17, and ran both through a photo and video shoot-out. Both are large, yet slim, laptops aimed at content creators who need a little portability.

Not all was perfect. Even though the panel reports that it is 10-bit capable, Windows recognized it as an 8-bit panel. That gave the Aero 17’s 10-bit the advantage in the display of smoother gradations.

We can’t say the Creator 17’s miniLED panel has that black-hole contrast of an OLED, but it was pretty good. And we have yet to see a 17-inch OLED in a laptop. Most, we suspect, are just getting out of the way for miniLED panels and eventually microLED, which is expected to offer near OLED-levels of contrast.

The Creator 17 appears to be based off the same chassis as the gaming-focused GS75 Stealth. At the time, the GS75 Stealth wowed us with its five-pound weight. The Creator 17 is a bit heavier at 5.3 pounds. That’s still pretty good. For comparison, the Aero 17 is 5.6 pounds, as is the Asus ROG Zephyrus Duo 15 (with its second screen, of course).

The selection of ports isn’t bad either. On the left you get a dedicated charging port for the 230-watt power brick, a Gigabit ethernet port, USB-A, microSD, and two analog ports. The two analog ports is mostly an appeal to streamers and competitors who want the separate analog channels, likely a holdover from the GS75 Stealth chassis. What we find less, useful though, is the microSD port. To be fair, a lot of drones now use microSD. Most creators record to SD cards, though, so they may need to get an external reader or USB-C hub.

The right side gives you Thunderbolt 3, two USB A, USB-C, HDMI, and Kensington lock port.

We’re still in the middle of our review, but two things already concern us: fan noise, and speaker quality. This is a lot of hardware in a 5.3-pound body, and it feels like the feature MSI threw overboard was the audio system.

We’ll get to performance in the formal review. We expect it to track within what’s expected of a Intel 10th-gen 8-core Core i7 and GeForce RTX 2080 Super Max-Q, but tuned for creators rather than all-out gamers.

That’s all details, though, compared to the main event–that blazing, 1,000-nit miniLED experience. For now, there is no other laptop on earth like MSI’s Creator 17.