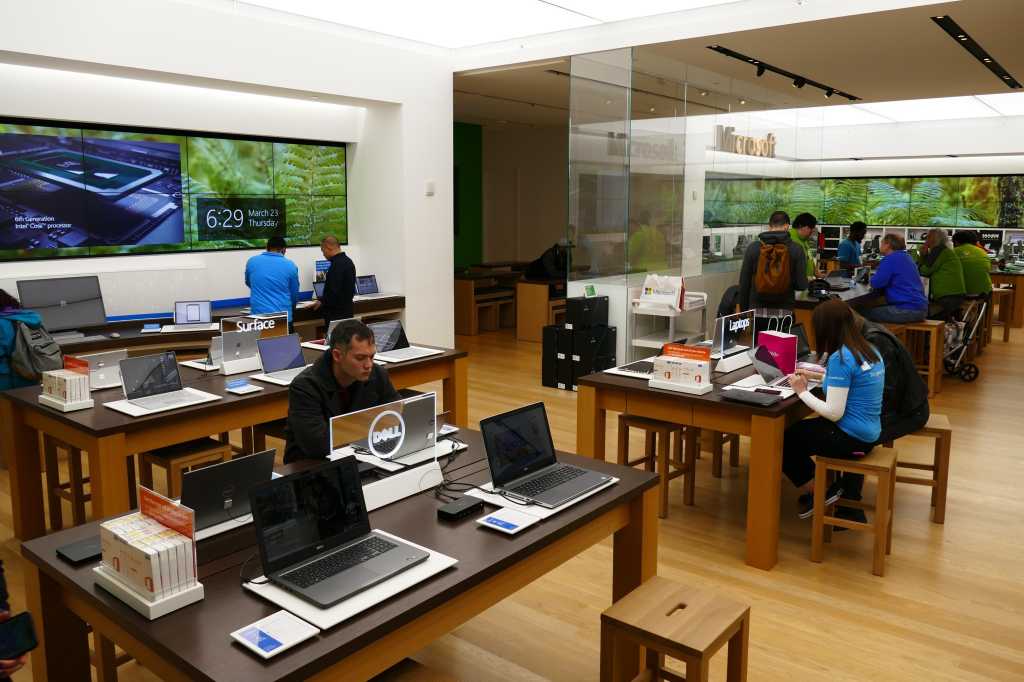 Apple Macs “just work” (for now at least). PCs are hobbyist machines. Both are stereotypes, sure, but they might offer some explanation why Apple Stores are thriving and Microsoft just decided to close all of theirs.

Microsoft spun the closure into a “new approach to retail,” one that would be driven through its website and online sales channels, rather than through a network of physical stores. (Amazon must be chuckling at this.) But the writing was on the wall: In 2019, Microsoft shuttered virtually all of its retail kiosks at malls and other shopping centers, leaving the larger Microsoft Stores on uncertain ground.

Part of it might have just been their respective approaches to retail. Microsoft Stores always felt a bit like a coffee shop: a place to hang out and talk technology in general. Apple Stores always felt more like an exclusive restaurant: If you’re not here to buy something, get out. You browsed at Microsoft Stores. You visited Apple Stores. The pandemic, of course, had its own, profound effects on both.

But viewing Apple Stores and Microsoft Stores alike as well, stores, also missed their secondary purpose: as a support hub. As anyone who’s owned an iPhone knows, if something goes wrong, your first stop is usually an Apple Store and its Genius Bar technicians. It’s impossible to know how many people visit an Apple Store just to browse versus scheduling a repair appointment. But I’d bet the proportions swung more toward the service side than in the Windows world. (We asked Microsoft for comment, but they haven’t responded.)

Closing Microsoft’s physical stores will certainly hurt. I visited Microsoft’s San Francisco store on multiple occasions on the way back from work—sometimes to see if I could take advantage of a holiday promotion, or to see how consumers were reacting to a new Surface product, or occasionally to seek out support myself. Microsoft’s own Surface products certainly aren’t worry-free. Microsoft’s Surface Book 2 had numerous bugs, and I’ve brought our review unit in for servicing before. One of our overheating 15-inch models apparently had a discrete GPU whose thermal paste failed over time, which we worked out at the support counter.

I think it’s fair, however, to say that consumers expect their Apple products to work. When they don’t, something is wrong, and an Apple tech is required to fix it. When a typical PC user encounters a bug, they sigh, swear, and start hunting down solutions. PC buyers tend to understand that a $599 PC will ship with a few blemishes. Apple wants you to bring its products in for servicing, like a luxury automobile. A Windows PCs can be tweaked by any shade-tree mechanic.

We’ll likely see this trend continue. With the pandemic still raging, there’s less emphasis on browsing physical stores. Instead, people still predominantly shop online, and simply return items with physical flaws or that they can’t fix themselves. As customers learn more about their PC, they’re turning to community support sites like Reddit, how-to videos, and other DIY fixes. Microsoft could also turn toward a strategy it’s pursued in the past: establishing “store-within-a-store” outposts at retailers like Best Buy.

What Microsoft Stores offered was a trusted, neutral brand for showcasing the PC as a whole, and providing service when necessary. That now goes away. Microsoft conspiracy theorists will see this as another example of Microsoft’s march away from the consumer, and there’s some truth to that, though Windows and Xbox get plenty of attention at major retailers like Best Buy, Walmart, and Target. And it’s undoubtedly a little weird that while Microsoft has closed its physical stores, AT&T, Apple, T-Mobile, and Verizon stores still exist.

I’d like to think, though, that Microsoft now has an unprecedented opportunity to overhaul sales and support in much the same way it reinvented the online conference. This year’s Microsoft Build was a superb example of how to provide on-demand sessions across multiple time zones, together with focused “labs” sessions where developers could ask questions. With Microsoft Stores closed, where does Microsoft go from here?

Can Microsoft take advantage of consumer smartphones to diagnose problems? Can it use remote-access technologies to do the same? Does it invest in local computer repair shops as authorized service dealers? Can the online Microsoft Store do for online sales what the Surface did for PCs: use 360-degree GIFs or even short, neutral hands-on videos to provide a more comprehensive look at the product?

For the short term, closing the Microsoft Stores just accelerates the trend of the DIY PC enthusiast. The challenge now for Microsoft is to take its move away from its brick-and-mortar stores and find an opportunity online.

Updated at 1:39 PM to note the prior relationship with Best Buy.