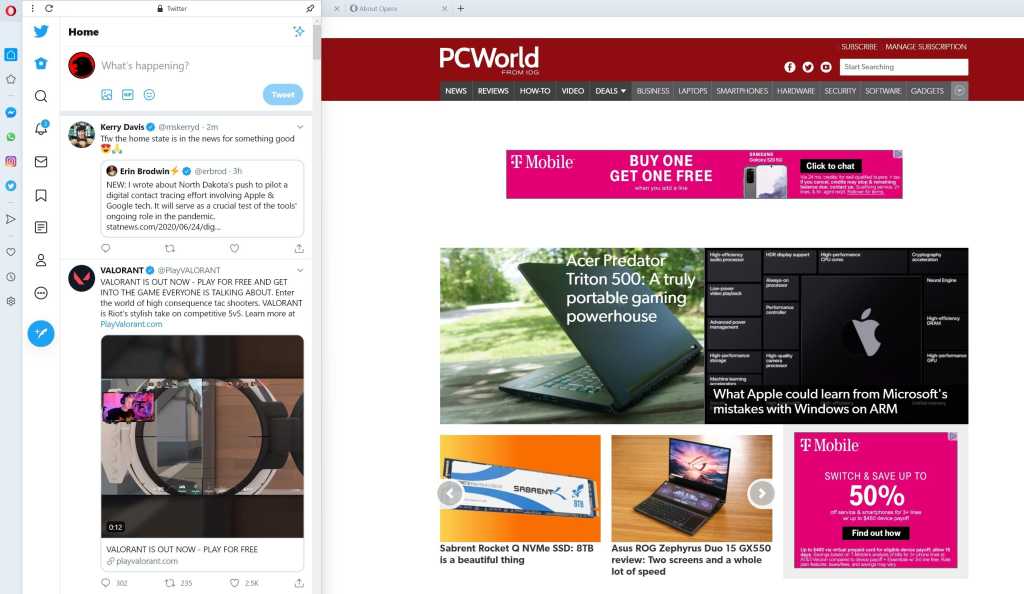 The Opera browser already includes a sidebar with links to several messaging apps. Now the company has added Twitter support, too, as part of Opera 69.

Twitter, like Instagram, Telegram, Facebook Messenger and other messaging apps, will reside in the Opera sidebar, which lives on the left rail by default. Sidebars have increasingly become ways in which some browsers, such as Firefox and Vivaldi, have integrated additional functionality.

With Opera 69, Twitter can be embedded in the sidebar, though you’ll have to enable it. To do so, click the three-dot icon at the bottom of the sidebar, then click Twitter in the Messengers section. (That will probably require you to click a small Show more link as well to expand the Messenger section.) Twitter’s main feed, the search function, as well as direct messaging are all enabled—the sidebar version is essentially a web widget, with even Twitter’s new tweet scheduling function enabled.

Opera’s blog seems to understand that users may have dozens of tabs open at one time, prompting user frustration for finding a specific tab like Twitter. “In simple terms: Whether it’s a Throwback Thursday or a #Caturday, no one likes to waste time looking for the tab where they last opened Twitter,” Opera said in its announcement.

Opera 69 includes some additional tweaks to the UI. There’s a new weather widget on the new-tab page, which must be manually configured to your own location. The visual-tab cycler, (Ctrl-Tab) which works much like Alt-Tab does for Windows apps, has been made larger. You can also right-click a tab and assign it to an Opera Workspace, the name Opera gives its user-configurable groups of tabs.