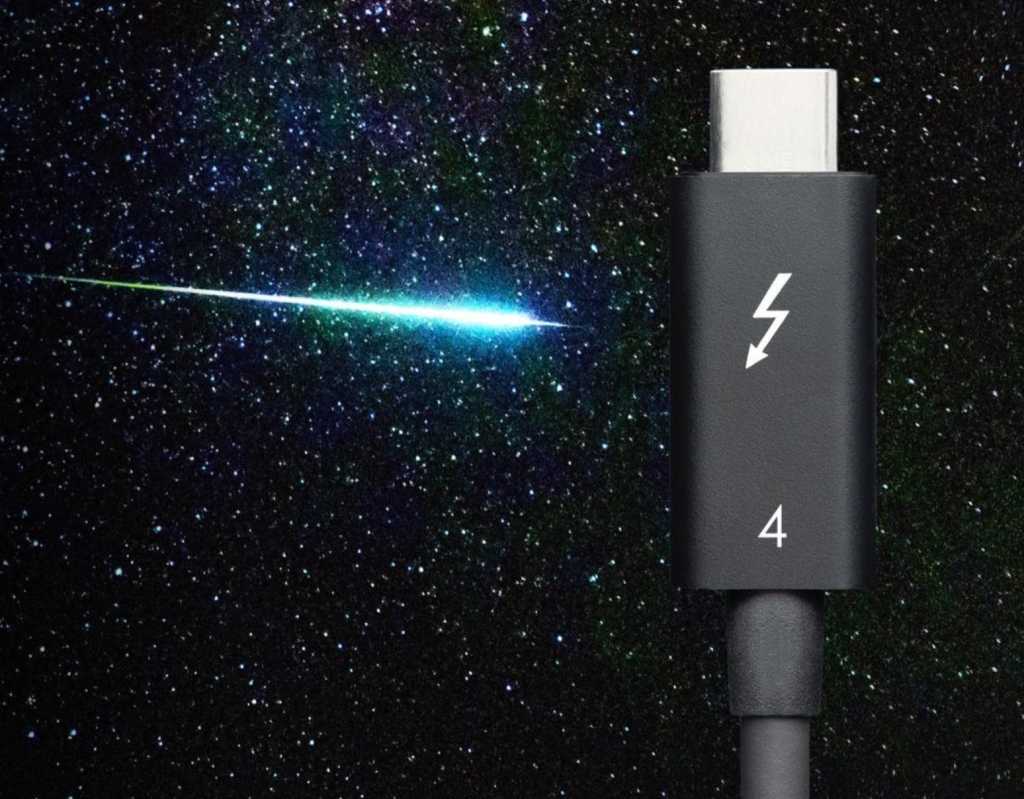 One thing that might not change is Thunderbolt’s exclusivity. Intel developed Thunderbolt with Apple, and perhaps not coincidentally, OEM systems based on rival AMD’s CPUs have never had this technology. AMD officials dismissed the need for Thunderbolt, even though officials indicated that they could ship Thunderbolt controllers without the need to integrate them.

Intel’s still pitching Thunderbolt as a single standard to rule them all, but the reality up to now has been complicated. You still have to squint hard at that USB-C-shaped port to determine which of the multitude of USB specifications it meets, including whether it’s a USB4 connection that happens to support Thunderbolt. To muddy things further, Thunderbolt also encompasses PCIe, DisplayPort, and USB Power Delivery standards.

Intel’s informal message is “just look for the Thunderbolt.” The small lightning-bolt icon means that port will support everything from USB 3.2 to USB4, and a high-speed Thunderbolt 4 cable will cover all of your bandwidth.

Though Thunderbolt 4 and USB4 share the same underlying protocol, Thunderbolt 4 includes more compatibility requirements than USB4 does. That makes Thunderbolt 4 the “complete version of USB-C,” according to Jason Ziller, the general manager for Client Connectivity for Intel, in a presentation to reporters.

Thunderbolt 4 also seeks to right some wrongs with its predecessor, Thunderbolt 3. For instance, Thunderbolt 3 was supposed to supply enough bandwidth to drive a pair of 4K displays at 60Hz or a single 8K monitor at 60Hz. “But not all of them do,” Ziller said of the current Thunderbolt 3 docks—because that spec’s loose minimum requirements allowed manufacturers to cut corners. Thunderbolt 4 promises to be rock-solid in that regard. In addition, the new spec will transfer at 32Gbps across PCIe (for storage speeds up to 3 gigabytes per second). It’s also fully USB4-compliant.

Intel’s also announcing that Thunderbolt cables, labeled with the lightning-bolt icon and a number ‘4,’ will be available in the standard 0.2m and 0.8m lengths, together with an additional 2-meter cable length that Ziller said should cost less than current 2-meter cables. There’s even a new optical Thunderbolt 4 cable design, with lengths ranging from 5 to 50 meters, that Ziller said he expects will be shipped sometime next year.

New Thunderbolt docks on the horizon

While Intel will supply its own Thunderbolt 4 solution as a selling point for Tiger Lake systems, it will also sell its own host silicon (“Maple Ridge,” specifically the JHL8540 and JHL8340 chips) as well as device silicon (“Goshen Ridge,” also known as the JHL8440). Thunderbolt 4 will also play a role in Intel’s ongoing Project Athena collaboration with PC vendors to develop premium thin-and-light notebooks.

Peripherals will evolve, too. We’re already seeing compact docks like Belkin’s Thunderbolt Dock Core, including some that are strictly bus-powered, in addition to larger, bulkier, more full-featured docksRemove non-product link manufactured by Lenovo and others. Intel says the key feature for these new Thunderbolt 4 docks will be four Thunderbolt ports for connecting multiple devices, in either a tree structure, or by daisy-chaining them. Thunderbolt 4 host PCs will be backward-compatible with existing Thunderbolt 3 docks.

Thunderbolt ports have gradually gained ground. According to Ziller, hundreds of millions of PCs and PC accessories have shipped with Thunderbolt 3 silicon inside. Thunderbolt docks are rising, too: Intel projects 20-percent growth, versus the 10-percent annual growth of cheaper, slower USB-C hubs.

Displays have been slower to pick up the technology. Ziller suggested we’d see more with Thunderbolt 4, though he couldn’t say when or in what quantity.

Can AMD use Thunderbolt 4?

If nothing else, the rival chipmakers seem aligned in their desire to skirt the issue. “I wouldn’t read it as it’s only Intel, because of VT-d,” Ziller said. “If [at AMD] there was an equivalent technology that supports DMA protection, that supports prevention against physical attacks, then that would be the requirement.” Ziller deferred to AMD as to what that technology could be, and he also declined to say whether Intel would license the VT-d technology to competitors.

AMD’s position has been that its customers don’t want Thunderbolt. But the company has also said it believes it could supply Thunderbolt designs if it chose to. (The ASRock Phantom Gaming ITX TB3 motherboardRemove non-product link combines Thunderbolt 3 with an AMD X570 chipset, allowing users, if not PC makers, to combine Thunderbolt and Ryzen themselves.)

“We do not find much demand from OEMs for Thunderbolt support,” an AMD representative said in an email when asked by PCWorld, before Intel’s announcement, why there had been few, if any, Ryzen-based notebooks with Thunderbolt in them to date. “There’s no technical reason preventing AMD from supporting Thunderbolt. A discrete Thunderbolt chipset can connect to the CPU via PCI [Express].”

But as for Intel’s technical requirements, AMD believes the company has satisfied them. AMD’s “Zen 2” architecture (the foundation for the Ryzen 3000 series CPUs) architecture “supports DMA security in pre-boot and OS environments via AMD-Vi (IOMMU) on USB and PCIe interfaces,” according to an AMD representative, via email. (Like Intel’s VT-d, AMD-Vi also supports virtualization of I/O resources, or directed I/O.)

AMD’s representative said that he couldn’t speak to Intel’s requirements—including Ziller’s comments about an AMD “equivalent to VT-d—but only what AMD’s own processors support. “What I can tell you is that ‘Zen 2’ supports DMA, that is consistent with the Microsoft Secured-Core PC initiative, both pre- and post-OS, through USB and PCIe interfaces,” he wrote.

Updated at 5:42 PM with additional details from AMD.