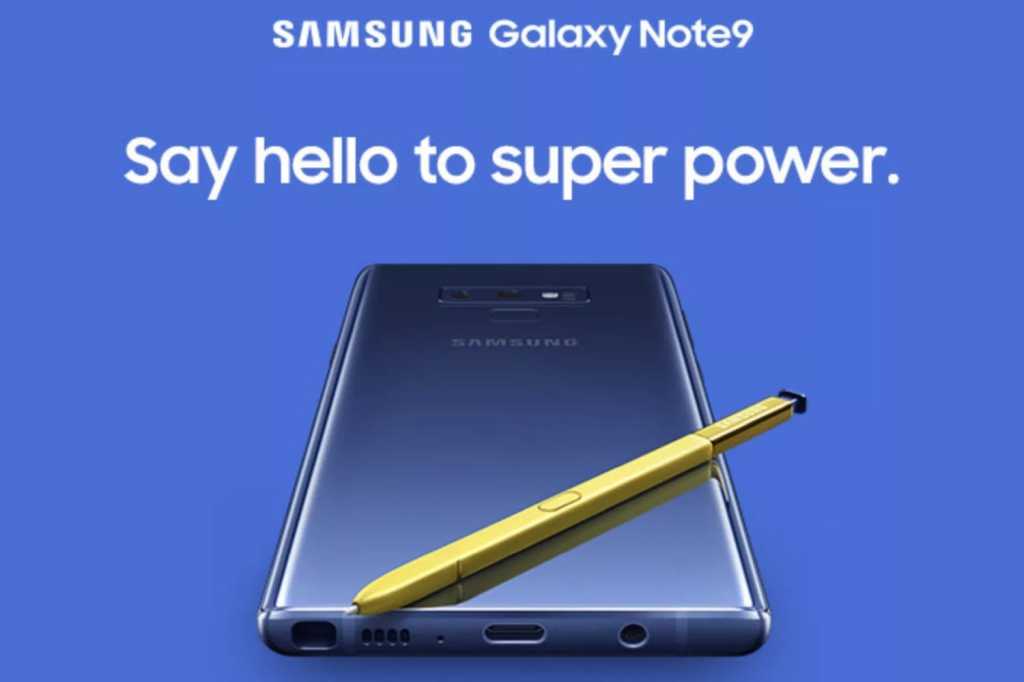 While it might seem like the Galaxy S9 only just hit shelves, the next big thing from Samsung is nearly upon us: the Galaxy Note 9. Rumors have been flowing for weeks about the new phablet phone—and it’s already shaping up to be one of the best phones of 2018. Here’s what we know so far:

As the release of the Galaxy Note 9 draws ever nearer, a nearly complete picture of the device has emerged, and Samsung itself tipped its hand early by temporarily publishing a preorder page for the phone in New Zealand, as first noticed by prolific phone whisperer Evan Blass. The official Galaxy Note 9 launch promo video also leaked onto YouTube.

From leaked pictures, renders, and most recently, a full unboxing, the new phone will be visually identical to last year’s model, and while it will have an updated processor (Snapdragon 845 vs the Snapdragon 835), the biggest improvement of all will likely be the S Pen. Well-known Twitter leakster Ice Universe has teased the phone’s upgraded stylus as “the biggest update in the history of the S Pen,” and Samsung’s leaked launch promo prominently features the “all new powerful S Pen.”

Just as important is what’s not new: Samsung’s preorder page showed that yes, the Galaxy Note 9 will still feature a headphone jack.

And most notably this could be the last Note phone Samsung ever makes. Rumors are swirling that the company is planning to release three new Galaxy S phones next year instead of the usual regular and plus sizes, and that might mean the Note name will be retired. According to Korean site The Bell, Samsung is seriously considering the change for 2019 to avoid producing too many phones with similar specs.

The look of the Galaxy Note generally follows the lead of the Galaxy S phones, but bigger. Last year’s release brought the Infinity Display from the Galaxy S8 to the Note 8 in a bigger 6.3-inch package, and this year will likely bring more of the same. Samsung opted to keep the design of the Galaxy S9 mostly unchanged from the S8, so the Note 9 will likely bring a similar aesthetic, with skinny bezels and an aluminum-and-glass enclosure. An early unboxing video by MySmartPrice seemingly confirms the Note 9’s similar design and feature set.

While it’s hard to tell from the video, the display on the Note 9 will technically be bigger according to reports—last year’s model had a stunning 6.32-inch, 18.5:9 display, and rumors report this year’s Note will brings a 6.38-inch one. However, we’re not going to hate on the Note 9’s screen as long as it brings along the same improvements to color accuracy and banding that Samsung made to the S9’s display.

However, one change we can clearly see in the video is the placement of the fingerprint sensor. On the S9, Samsung moved it to the space below the camera rather than next to it, and our fingers are much happier for it. However, the sensor placement here is a little different than it is on the S9. On that phone, the camera array is arranged vertically with the sensor below the second camera, but on the Note 9, Samsung is apparently sticking to a horizontal setup and putting the sensor below that.

What we won’t get is in-display fingerprint sensing. While we originally heard grumblings that the Note 9 would introduce the long-awaited biometric similar to the one Vivo uses on its X20 Plus UD, former KGI Securities analyst Ming-Chi Kuo (via 9to5Google) has thrown some cold water on that notion. While Samsung is indeed developing the technology in-house, Kuo says it is “likely” Samsung needed to scrap it in the Note 9 due to “technological difficulties.” According to the 9to5Google report, Kuo says the feature “currently suffers from issues with screen protectors and various different environments affecting the success rate of the under-display fingerprint reader.” However, the feature could still possibly appear in the Galaxy S10 in 2019.

The Galaxy S9 was the first phone to ship with Qualcomm’s new Snapdragon 845 processor, so there’s a 99.9 percent chance that the Note 9 will have the same system-on-chip. What could change, however is the RAM on board. Samsung upped the memory on its Galaxy S9+ from 4GB to 6GB to match the Note 8’s, but based on the above unboxing vid, the Note 9 base model won’t see a bump to 8GB as hoped.

Standard storage capacity is sticking to 64GB as well, so anyone looking for beefier specs will need to wait for one of the usual special-edition models. A rumor from oft-accurate Ice Galaxy on Twitter pegged the high-end Note 9 as having 8GB and 512GB of storage, but said the model would be for the “lucky” ones, suggesting it will be regional. Samsung’s leaked promo video confirmed that a 512GB model will come in some form. At any rate, those specs would be a first for a Samsung flagship. If you can’t wait for one of those, turn to expandable storage instead: While the previous Note topped out at 256GB of expandable memory, Samsung’s leaked promo video touts support for 512GB SD card sizes

While Samsung also kept the same 3,000mAh and 3,500mAh batteries on the S9 and S9+, respectively, notable leaker Ice Universe said on Twitter that Samsung was testing a 3,850mAh and 4,000mAh batteries for the new phone, which would surely supply a battery boost.

And yes, the phone will still have a headphone jack.

The Galaxy S9 launched with Oreo on board, and it’s a good bet that the Note 9 will as well, even though it will launch at around the same time Android P lands. However, leaker Ice Universe says that the Note 9 will include a new interface to better highlight the Note 9’s productivity features. The Note already has unique features such as off-screen memos and Air Control, so it will be interesting to see what else Samsung has in store for S Pen and phablet lovers.

Bixby was greatly improved on the Galaxy S9, bringing food scanning, AR makeup, and live translations, but it didn’t get a bump to version 2. According to Samsung’s mobile chief DJ Koh, however, it’s on the way. In an interview with ZDNet at Mobile World Congress in February, Koh confirmed that Samsung is already testing the next version of its AI assistant with the hope that the company “will be able to unveil Bixby 2.0 when we launch the Galaxy Note 9.”

The second version of Bixby is expected to expand support to more Samsung products, such as TVs and appliances, while tightening the integration within the ecosystem. Samsung has said its goal is to make Bixby “ubiquitous.” The new version of the Note 9 could be the first step toward making that happen.

Each version of the Note brings some changes to what the S Pen can do, and the Note 9 will be no exception. Samsung executives have already said that it started work on its next phablet as soon as the Note 8 development was wrapped up and is exploring new ways to enhance its most unique feature: “We are already considering how to approach the development of the next Note by evaluating the latest model and looking for ways to improve upon signature features like the S Pen.”

Add to the speculation a giant tease by Twitter tipster Ice Universe, who said the Note 9 would bring “the biggest update in the history of the S Pen.” Rumors are light on what the next stylus could bring, but All About Samsung has suggested that built-in Bluetooth could be on the way. A recent patent suggests Samsung is working on ways to merge touch and pen interactivity for a smooth, seamless experience. Other rumors also claim that Samsung is working on adding a microphone to the S Pen for calls and voice control.

The only thing certain is that changes are indeed coming, as Samsung’s leaked promo video showcases the “all new powerful S Pen.”

The Note 8 was the first to bring a dual camera to a Samsung flagship phone, a feature that quickly made its way over to the S9+ as well. Additionally, the S9 introduced cool new features such as Dual Aperture and Super Slow-Mo that will no doubt make it to the Note 9 when it launches. However, Samsung is likely to use the Note 9 to debut some next-gen camera tech as well.

Based on the video above, Samsung will be staying with the same dual 12MP setup. That’s not to say it won’t take better picture, however. Samsung was rumored to be working on a sensor with an f/1.4 aperture (versus f/1.7 on the Note 8 and f/1.5 on the S9), which would boost its low-light capabilities.

Samsung has announced that the Galaxy Note 9 will be announced at an even in New York on August 9. That’s earlier than last year’s Note 8 launch, which was unveiled on August 23. That should mean it will go on sale near the end of August based on Samsung’s usual schedule. And you can expect it to cost a bundle. The Note 8 landed with a price tag of $950.