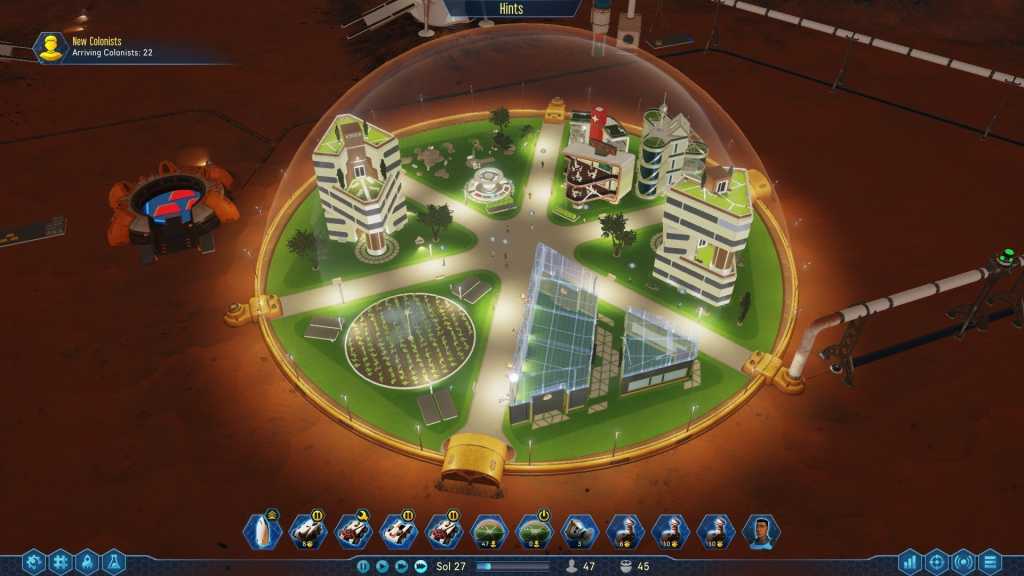 Surviving Mars has a lot of interface annoyances and other small issues, but its blend of optimism and dread makes a compelling foundation for a city/colony builder.

Redundancy. After spearheading humanity’s first-ever Martian colony, I’ve realized redundancy is critical. You’re building one pipe between the oxygen pump and the habitation dome? Build two. Your power grid is clustered together? Make two or three groups of solar panels instead, and throw a few wind turbines into the mix for when the sun goes down. One farm? Try four.

When help is 34 million miles (or 55 million kilometers) away, your only hope is that when something goes wrong—and it will go wrong—there’s another option to fall back on. That’s the key to Surviving Mars ($40 on Green Man Gaming).

Things aren’t looking too bad on Mars these days, though. I hesitate to call the situation “stable”—I know better than to jinx myself. A meteor shower or an ill-timed dust storm could probably do some serious damage. And that’s ignoring the two colonies I abandoned when troubles mounted.

But I think I have a proper handle on Surviving Mars at this point. My current colony is flourishing. We’re closing in on 500 colonists, many of whom were born and raised on Martian soil. We’ve got food stockpiles to last for years, multiple sources of metal and concrete to extract, plenty of factories to assemble the machine parts and electronics we used to import from Earth. It’s looking pretty good.

We sure did struggle to get here though. Surviving Mars is the latest city builder-type game from Haemimont, the developer behind the last few Tropicos. It’s more of a colony builder than a city builder though, and as you’ve no doubt inferred, Surviving Mars trades the blue waters of the Caribbean for the red soils of our nearest planetary neighbor.

Turns out Mars doesn’t really want us there, either—or at least is indifferent to whether these fleshy pink creatures on its surface live or die. Thus it falls to you to oversee the construction of humanity’s first planetary colony from scratch.

You’ll land your first rocket, packed with drones and whatever supplies you could carry—a bit of concrete, a bit of metal. You’ll build a solar panel, some cables, maybe a concrete extractor. You’ll start hunting for underground water sources to exploit, or if you’re unlucky you’ll be forced to rely on condensing scant amounts of moisture from the air.

It’s rough. Precarious. Chances are you’ll work for at least an hour or two before humans ever step one single foot on Mars, and for good reason—once they’re there, they can die. One miscalculation in your oxygen supply, or the amount of food you have on hand, and the whole colony could be wiped out. It pays to go slowly, to build water tanks and batteries and oxygen tanks as stockpiles, to get some research under your belt.

Then you can finally build your first human settlement, a little oasis of green grass in a vast red desert. You’ll charter a rocket, bring up your first starry-eyed settlers, rejoice that you can finally extract your own metals instead of importing them from Earth. You’ll cross your fingers and hope they make it through the first ten years. If you’re lucky, the first Martian child might even be born.

Weirdly, it’s this underlying optimism I find myself most drawn to in Surviving Mars. I wouldn’t exactly call Surviving Mars hard science, but it at least falls on that end of the spectrum, and it wants you to approach it with a gravitas befitting the first Martian colony. It expects you to struggle through the earliest years and, when things go poorly, it expects you to die. It’s a survival game at its core, and the setting is appropriate: Conquering Mars is a challenge.

But the implication is that we could do it. Humanity could overcome its one-planet status, branch out into the solar system. One day humans might walk on Mars, might work and get married and grow crops on Mars. The tech tree is littered with optimistic quotes from luminaries like Stephen Hawking, all speaking to humanity’s potential. The DJ on the in-game Red Frontier radio station talks about building baseball diamonds on Mars, these small and mundane slices of Earth made miracles in their migration to an alien landscape.

Surviving Mars straddles a weird line, I think. On one hand, you have the hard-science approach to the simulation aspect, this constant feeling of setting up dominoes. Maybe a wind turbine breaks and you lose power to your machine parts factory, which then makes it harder to maintain the other turbines, a cascading failure that ends up threatening your whole colony. This element of danger sets it apart from most city builders, right?

The visual style seems to imply exactly the opposite, however. It’s all soft curves, lush grass-filled habitation domes, mid-century modern apartment buildings and condos. That sort of retro-futurism seems almost anachronistic in the context of this serious survival game.

Futures are imagined though. They’re constructed. And after a decade of dismal apocalypses and post-apocalypses, I get the feeling Haemimont wants you to come away feeling good about our chances. It’s the kind of optimism humanity had about space travel in the 1960s and ‘70s, before NASA’s funding was strip-mined, before we stopped looking past low-Earth orbit. And it’s a kind of optimism that seems resurgent in recent years, at least as it pertains to spaceflight.

That feeling of accomplishment is what draws me back to Surviving Mars, even though the game desperately needs polishing. The interface in particular could use another pass or two. Control issues are the most minor, but I find myself stuck on them—for instance, the research screen doesn’t scroll unless you move the mouse to the right side of the screen, but if you’re playing in borderless windowed mode your mouse will just…keep on going to your secondary monitor. WASD won’t work to pan it over, nor will the scroll wheel. Also, it doesn’t highlight whatever research you last finished, so I hope you remember. Small annoyances like that.

Important information is also hidden two or three levels deep, and some elements aren’t revealed until after you’ve already messed them up once. For instance, in order to extract metals you need to construct a mine for your colonists to work in. The catch: The mine has to be within a certain radius of the habitation dome—and the game doesn’t tell you that until it’s too late. You’ll find out when you go to place your first mine and can’t.

And the drone system is a massive pain. Like the Anno games, Surviving Mars is more about constructing logistics than ordering individuals around. At the heart of this are your drones, autonomous robots that carry supplies around your base. Drones are assigned to a certain drone hub though, and these hubs only cover a small radius. Thus to get supplies from one end of your base to the other often means building storage areas wherever hubs overlap and then hoping the drones are smart enough to move the necessary items back and forth.

They’re not, though. They’re really not. Getting the drones to work the way you want can be utterly aggravating, and I’ve often found myself seething when a dome is rapidly falling apart and the reason is that none of my drones thought to move any metal or concrete into the area so repairs could be done. Worse, there’s very little indication of what’s actually going wrong. You’ll hear something like “Food Shortage,” check your overall levels and see 3,000 food in storage, and have utterly no idea why Drone A can’t cooperate with Drone B to get food to Dome C. Colonists get weird too. They’ll choose jobs they’re entirely unqualified for, then get sad they’re not qualified for the jobs they’re working at, and yet still refuse to move to a new gig even if there are slots open.

It’s just bizarre, or even outright frustrating, and combined with the threadbare tutorial the difficulty curve in this case is more of a difficulty wall. Often it feels like the difficulty is artificial, like you failed not because something was hard but because the game didn’t tell you how not to fail in the first place. And while that’s certainly a valid approach (especially when it involves a new frontier like colonizing Mars) that sort of trial-and-error can get tiresome.

Ultimately I think Surviving Mars is worth bearing with, though. That’s not the most rousing recommendation, I know, and for good reason. Lots of features feel half-finished, full of potential but either needing another balance pass or another handful of buildings or even just a better menu so you could keep track of what’s going on. Changes need to be made.

Still, there’s a good foundation here. I think a lot of builder-type games could learn from Surviving Mars—the tension of those early hours, the will-they-or-won’t-they that can only come from a scenario with actual stakes, the sense of accomplishment that comes from beating those odds. Mars or not, those are powerful emotions.