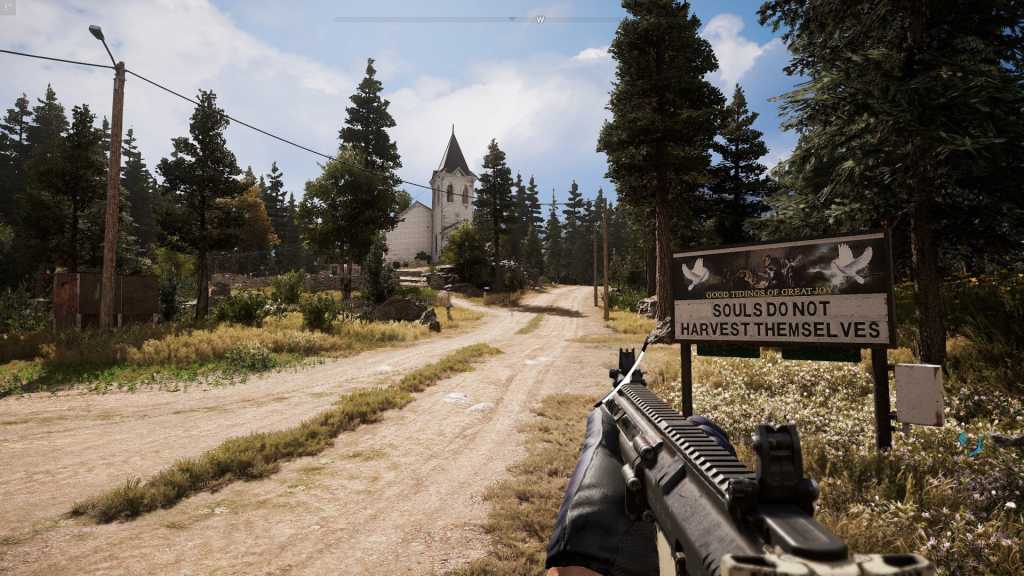 Far Cry 5 offers a fun, vivid take on rural Americana, but doesn’t dig into the questions its setting raises.

My favorite moments in Far Cry 5 are quiet. Just me and my dog Boomer, wandering through the morning fog as it sprawls across fields of dry grass and scrub brush, a nearby brook and some crowing birds the only complement to my own footfalls. It’s in these moments I can really sit and appreciate the majesty of Ubisoft’s world, this faux-Montana with its soaring mountains, its golden farmlands and sleepy waterways, its hyper-aggressive wildlife.

It’s almost enough to make you forget about everything that’s gone wrong, here.

Far Cry 5 is caught up in all sorts of discussions I’ve no doubt it didn’t want to be caught up in. “What responsibility, if any, do games have to reflect societal concerns?” “Why are big-budget games so afraid of saying anything about anything, and how can we fix it?” And so on.

There are no answers here. Far Cry 5 is only interested in being Far Cry—and it’s good at it, too.

Much of the credit goes, as always, to Ubisoft’s art department. Montana is spectacular. It really, truly is. There’s this throwback-Americana look to it, the wooden cabins and hand-painted signs I remember from a childhood spent visiting Yellowstone and the Grand Canyon and their fellow national parks. I wasn’t lying, my favorite moments in Far Cry 5 typically involved little more than walking through a forest or across a ramshackle bridge.

Art is aided by a renewed importance to the world itself. Arriving at many of the same conclusions as Assassin’s Creed: Origins, Far Cry 5 finally ditches the tower-climbing formula Ubisoft once held dear, and it’s a hundred times better for it.

Rather than dumping icons scattershot across the map, you’ll instead set off in search of information. A townsperson might tell you about a mechanic who fled the area, leaving behind a tooled-up car in a nearby garage. Another might have word of a local celebrity holed up in a hotel down the street, or a cache of weapons in the back room of a diner, or assign you to kill a marauding bear in the adjacent hills. A map lying half-discarded on a chair might tell you of a nearby farm, while glancing at signs on the side of the road will alert you to lucrative hunting grounds or fishing spots.

It’s so damn refreshing. As with Origins, I found myself engaging with Far Cry 5’s side-content far more often than I did in 3 and 4. Flying my helicopter towards the next mission I might spot a cabin peaking out from the treetops, then swoop down to check it out. Chances are it held more of the same weapons and medkits and so on that I already had stocked, but there was always the possibility of a bizarre mission—maybe investigating aliens, a haunted house, or a berserk moose.

Failing that, each building was still dressed up with such care, so unique, that I never really felt cheated. The reward might be as simple as “Wow, whoever lived here really liked baseball,” and that was okay with me. It’s very reminiscent of the modern Fallout titles in that respect, and very different from Ubisoft circa 2007 to 2016.

Anyway, that’s the biggest change. The rest is bog-standard Far Cry. You play as a rookie cop who everyone simply calls “Rookie,” a blank-slate of a character with no voice or personality—a step backward from Far Cry 4 in my opinion. In any case, you tag along with your boss (the local sheriff), a US Marshall, and two other deputies on a mission to arrest Joseph Seed, leader of a local cult called the Project at Eden’s Gate.

These “Peggies,” as the locals call them, are heavily armed and essentially a riff on the Branch Davidians, but large and powerful enough to basically take over the whole of Montana. Needless to say, Joseph’s arrest doesn’t go as planned. You’re stranded in Montana and shortly thereafter are co-opted to spearhead a resistance movement.

Montana is split into five regions: one small tutorial area, another small island where Joseph’s headquartered, and then three enormous sections led by Joseph’s lieutenants/”family.” John rules the farmlands to the west, Jacob the Whitehall Mountains to the north, and Faith the Henbane River to the east. Much like Ghost Recon: Wildlands, you can take on these regions in any order. Your only goal is to build up “Resistance Points” in each, which you do by attacking outposts, blowing up trucks, rescuing civilians, and doing more formalized story missions. Once you’ve got enough, you take the fight to the lieutenants and then, eventually, Joseph himself.

The story completely falls apart though. I mean, let’s just ignore the major plot holes, like the fact you have ready access to both planes and helicopters, are told that the nearest city is around two hours driving which means maybe 30 minutes flying, and yet instead of leaving to summon the National Guard you decide the better option is a small-scale guerrilla war.

Regardless, the open-ended structure leads to pacing issues, as well as a persistent feeling of deja vu. Far Cry 5 seems to have had trouble navigating the fact the player could learn any of its second act plot points in any order. As a result it’s constantly reiterating information you’ve already learned, doubling back on itself to make sure you’re keeping up with a story that’s really not all that complicated.

The overarching story of each region also hits the same few plot points. Far Cry 5 has a recurring bit where you’re captured and then somehow escape at the last minute—a conceit that’s hard to believe the first time it happens, and downright miraculous the seventh time. At some point, when you’ve killed hundreds upon hundreds of cultists singlehandedly, you have to wonder why one of them didn’t just put a bullet in your brain and have done with it instead of monologuing to you for minutes on end. There are also two different forms of mind control/hypnosis in this game, if you can believe it, each used for pretty much the same purpose but by a different lieutenant.

But more importantly, Far Cry 5 is the most tonally inconsistent in the series. One companion told me about a cultist who chopped the toes off parents and fed them to starving children. Another yelled “Skullfucked!” when I shot an enemy in the head. A third is a tamed mountain lion named Peaches. That pretty much summarizes the range of nonsense on display here. It vacillates wildly between ultra-serious morality tale and farce. There are multiple graphic torture scenes to endure, here. There’s also a mission called “Lord of the Wings,” where you guide your wingsuit through a canyon that’s on fire.

Which brings me back to my initial point: Far Cry 5’s been dragged into all sorts of discussions it clearly didn’t intend to fall afoul of, chief among them being its use of America as a setting in an era where real-world America is more politically divided than ever. Ubisoft’s explanation has so far amounted to (paraphrasing) “We’re not trying to make any sort of political statement.”

To throw a quote right back, though: “If you choose not to decide, you still have made a choice.” Far Cry 5 looks like real-world Montana, but it sure doesn’t feel like real-world Montana. It can’t. It isn’t an accurate representation of the current social landscape, because none of our modern worries are reflected. There’s no discussion of wealth inequality, barely a passing reference to gun control (and often only in the context of “Liberals trying to take our guns”).

And religion? Fascism? White supremacy? Police brutality? All neatly side-stepped—yes, in a game where you, a police officer, shoot and kill hundreds of eugenics-loving religious people.

That may not bother you, and if so, fine. Far Cry 5 is, as I said, a mechanically excellent Far Cry game. I largely enjoyed my time with it, in a mindless way. But it does raise questions of what responsibility developers have to real-world settings, if any. It also raises, as I said, questions about how long developers can get away with this “Our statement is that there’s no statement” mindset.

For my part, I’d rather a game try than not. From BioShock: Infinite toSpec Ops: The Line, there are plenty of games that don’t completely get their message across, but at least distinguish themselves in the attempt.

And I bet that version of Far Cry 5 existed, at some point—even if only in some writer’s imagination. Much as Ubisoft might maintain the American setting was completely innocent, I’ve no doubt someone at some point chose it because they wanted to say something important about our society, be it politics or religion or what-have-you. I weep for that version of Far Cry 5, before “business realities” got in the way, because I bet it would’ve been an interesting ride.

What remains is just your standard blockbuster fare, empty and ultimately forgettable. That’s a fine backdrop for traditional Far Cry shenanigans (and there are many) but it certainly doesn’t live up to its potential.