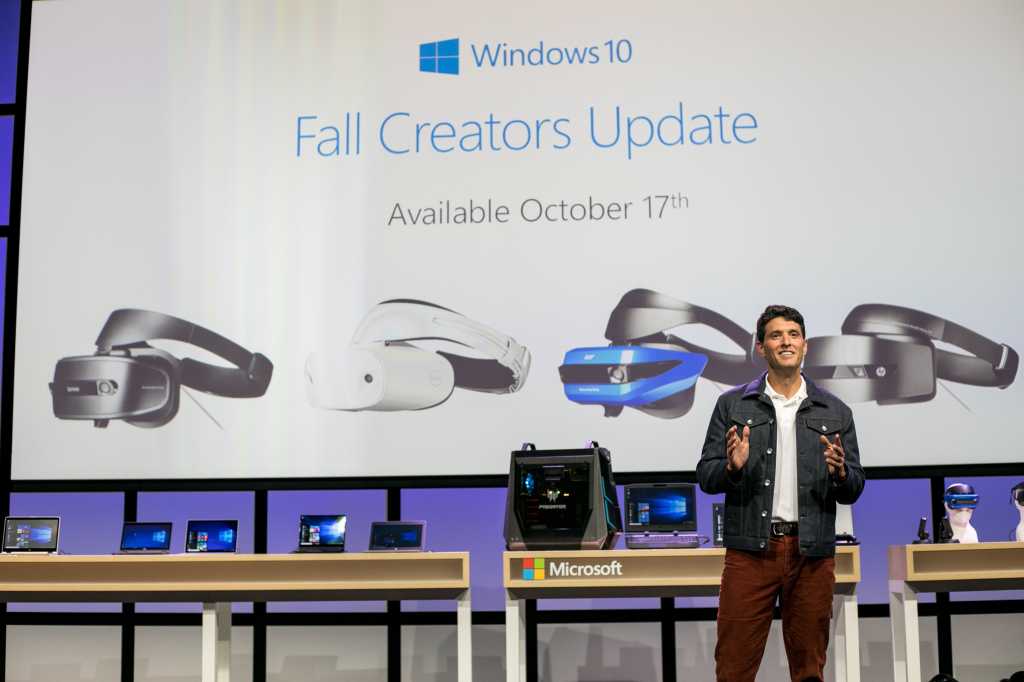 Microsoft handed the reins of its Windows and Devices team from Terry Myerson to Rajesh Jha on Thursday, part of a series of moves signalling that Microsoft wants to bring a “unifying product ethos” to Windows, Office, and third-party apps.

In an email to employees, chief executive Satya Nadella explained that the future of Microsoft lay in “the intelligent cloud and the intelligent edge,” Nadella’s new way of describing Microsoft’s mission. Familiar names will help Microsoft get there: Panos Panay, who helped bring the original Surface to market, is now Microsoft’s Chief Product Officer, and Joe Belfiore will continue leading Microsoft’s Windows experiences.

But Nadella also offered some insight as to how he expects Jha to move forward, and what he expects out of him: coherence. “The purpose of this team is to instill a unifying product ethos across our end-user experiences and devices,” Nadella wrote.

“Computing experiences are evolving to include multiple senses and are no longer bound to one device at a time but increasingly spanning many as we move from home to work and on the go,” Nadella wrote. “These modern needs, habits and expectations of our customers are motivating us to bring Windows, Office, and third-party applications and devices into a more cohesive Microsoft 365 experience.”

What this means for you: It’s possible that Nadella is signalling the beginning of a “One Windows” vision that people began talking about earlier this year. How this will all play out, and what this means for you, isn’t yet known. What we do know is two things: Myerson’s transition will play out over the next few months, ensuring a smooth handover, and we’ll learn more at Build. Nadella’s email states that Belfiore plans to unveil the latest iteration of Microsoft’s Windows roadmap at its developer conference.

What could a unified Microsoft product ethos mean?

Nadella’s memo could be seen as giving credence to a more unified vision of Windows, beginning with its underpinnings, known as Core OS, and moving up through “composable shells” that could be adapted for various devices. As Windows Central and other sites have reported, this “CShell” would be a modular element that would be specific to a particular type of device: one for desktop PCs, one for notebooks, and so on. What isn’t clear is whether CShell and related efforts, such as a rumored “Andromeda” folding tablet, were R&D concepts or actual roadmaps. We hope Microsoft will bring some clarity to this at Build.

Nadella’s memo might also indicate that he expects his engineers to move faster to modernize the look and feel of Windows. Right now, for example, you can go into the Windows 10 Settings menu and make many adjustments to your system. But for certain tweaks, you still have to dive into the more antiquated Control Panel, which simply isn’t as friendly.

Finally, Microsoft may be trying to cut down on the feature disparity between the various flavors of Office apps. Versions of Office for the desktop, web, UWP, mobile, and Office 365, with varying user interfaces and feature sets for consumers and businesses, can create confusion. Skype, for example, is a mess.

The names you need to know

The majority of Nadella’s memo described the new roles of various executives. Here’s a short list of who’s doing what among the Microsoft ranks:

Rajesh Jha: A LinkedIn exec who later became the executive vice president of Office, Jha is now tasked with leading a new team focused on Experiences & Devices. Nadella wants a fresh start, with coherence across all product lines.

Panos Panay: Microsoft’s new Chief Product Officer “will lead our devices vision and further our product ethos across hardware and software boundaries for our first-party devices, while creating new categories and opportunities for the entire ecosystem,” Nadella wrote. This almost certainly ensures the viability of Surface and other Microsoft hardware.

Joe Belfiore: The well-liked former chief of the Windows Phone business will continue leading Windows experiences, Nadella wrote. The interesting point that Nadella makes is that he sees Windows more “deeply connect[ing]” to Microsoft 365, Microsoft’s combination of Office 365, Windows 10, and Enterprise Mobility + Security. Microsoft has clearly got the subscription religion. Expect Microsoft to drive this vision even more—at least within businesses.

Scott Guthrie: Another high-profile cloud name within Microsoft, Guthrie will take the helm of a new team overseeing Cloud + AI, as well as edge devices like the PC. Microsoft has continued to make AI a focus, including the recent announcement of Windows ML. It’s not clear whether Guthrie will actually oversee this part of the business, but Microsoft seems to keep trying to make Windows smarter.

Eric Lockard will be part of this team, leading a “Universal Store” effort. It’s not quite clear what Microsoft intends here, but a more comprehensive Store app is worth thinking about.

Alex Kipman will lead the AI Perception and Mixed Reality team, which will unite all of Microsoft’s speech, vision, MR and additional perception capabilities into one team, Nadella wrote.

As for Terry Myerson? Myerson wrote in a LinkedIn post that he’s “ready for a break.”

Microsoft Build begins May 7. Nadella’s memo sets the stage for what could be an exciting conference.