Intel’s Hades Canyon is more than a simple successor to its Skull Canyon predecessor, an extreme version of Intel’s Next Unit of Computing (NUC). When Skull Canyon launched in 2016, it bucked the mini-PC trend of modest specs designed for general computing, instead boasting the absolute latest in hardware for its size: a 45W quad-core processor, integrated graphics capable of 1080p gaming, and a port that supported external graphics. At the time, that ultra-compact mini-PC was unrivaled.

The Hades Canyon NUC brings its own first: a single, Intel-produced chip (code-named Kaby Lake-G) that marries an Intel mobile CPU with an AMD Radeon RX Vega M mobile GPU. It’s silicon that can handle heavy-duty tasks without breaking much of a sweat.

Hades Canyon comes in two configurations—one marketed as an overclockable gaming machine (the NUC8i7HVK), and the other as a content-creation system (the NUC8i7HNK). We received the gaming version for review, which is the higher-end option and costs $1,000 for just the bare-bones kit.

Adding storage, memory, and an operating system will raise the price by at least a few hundred dollars, given today’s inflated prices for SSDs and RAM. Our review unit, which came pre-equipped with a 118GB Intel Optane 800P-series SSD, 512GB Intel 545s-series SSD, 16GB of Kingston HyperX DDR4/3200 RAM, and a Windows 10 Pro license, would set us back by almost $1,550 in total.

Each configuration comes equipped with a different combination of Intel processor and AMD GPU. (To get a thorough rundown on Kaby Lake-G, you can read our primer that followed the CES announcement of the chips.) Inside the NUC8i7HVK is the 100W Core i7-8809G, which houses a quad-core, eight-thread mobile CPU and Radeon RX Vega M GH graphics.

The processor is equivalent to Intel’s 45W H-series mobile CPUs (complete with active integrated graphics that can handle video playback and other basic tasks), though its power requirements differ slightly. The actual power consumed varies depending on CPU and GPU loads, as Intel designed the package with a shared power budget and uses what it calls dynamic tuning to allow each component a greater ability to reach its max boost. As mentioned previously, it’s overclockable, with stock settings of a 3.1GHz base clock and 4.2GHz Turbo. Intel says that it’s gotten up to 4.7GHz when overclocking.

Linked to the processor by eight PCIe lanes is the Vega M GH, which runs at a 1,063MHz base clock and 1,190MHz boost clock. The GH variant of Vega M comes with 24 compute units and 4GB of HBM2 memory, along with a slightly faster memory bandwidth of 204.8GB per second. It also supports output to six 4K displays simultaneously, with up to five at 60Hz and the sixth at 30Hz. Like the CPU, you can overclock the Vega M GH and the HBM2 memory.

Backing this star CPU-GPU pairing is a whole array of equally powerhouse technology. Two M.2 slots can take SATA 6Gbps or x4 PCIe Gen 3 (AHCI or NVMe) drives in either a 42mm or 80mm length, with the option to run two drives in RAID 0 or RAID 1. An Intel Wireless-AC 8265 card handles both 802.11ac 2×2 Wi-Fi and Bluetooth 4.2. Two SO-DIMM sockets accept up to 32GB of DDR4/2,400MHz RAM at 1.2V, and support overclocked DDR4 RAM. There’s even a beam-forming, far-field, quad-mic array included this time around.

On the back side there’s a 3.5mm speaker/TOSLINK jack, the connector for the 230W power supply, two Thunderbolt 3 ports, two Mini DisplayPort 1.2, two gigabit ethernet, four USB 3.0 Type A, and HDMI 2.0a. The two Thunderbolt 3 ports each support 4 PCIe lanes, but they’re connected to the same controller. As a result, bandwidth may be shared if both ports run simultaneously using a x4 configuration. As with the Skull Canyon NUC, you may run external graphics over the Thunderbolt 3 ports.

You can expand the number of USB ports if you utilize the I/O header, which carries signals for two USB 3.0, two USB 2.0, CEC, and the front panel.

The chassis once again features a replaceable top lid, though this time it’s been upgraded to feature customizable RGB LED lights that illuminate the shape of a skull. The default is a red-and-blue color scheme, but it’s easily changed through included software to other hues and with different glow patterns. You also have the option to change the color of the status LEDs on the front panel, which are also RGB.

By and large, the NUC8i7HVK’s Intel-AMD combination delivers a solid experience. Let’s dig into the gaming performance first.

We’ll start with 3DMark’s Fire Strike test, a synthetic benchmark that simulates gaming at 1080p on Medium settings. Because this is the first time we’ve seen the Radeon RX Vega M in the wild, I chose to isolate just the graphics score in order to see where it ranked among other mobile GPUs. This way, the potential influence of the CPU on the ranking is minimized.

Note: As you may have already figured out, all of the comparison systems in these charts are laptops—that’s where the bulk of our testing of mobile parts lies. It’s not a perfect apples-to-apples comparison, given that laptops have a different set of demands for cooling versus mini-PCs, but it still provides a decent representation of standing.

In actual games, the NUC8i7HVK largely maintains that position just below systems with the GTX 1060 Max-Q. In Rise of the Tomb Raider, which is a semi-recent blockbuster game that can still push budget-range GPUs, we got an average of 51 fps on the Very High preset.

That should be smooth enough for many folks, but if not, the problem’s easily solved in one of two ways. The more exciting option: Hooking up the NUC8i7HVK to a FreeSync monitor. Like other AMD GPUs, the Vega M GH supports those variable-refresh displays. (It supports features like Radeon Chill as well.) You can also drop the graphics setting down to High, which will then bump up the frame rate to about 63 fps.

Middle-earth: Shadow of War and PUBG

But what about today’s games? To answer that question, I fired up FRAPS in two contemporary games: last fall’s Middle-earth: Shadow of War and PlayerUnknown’s Battlegrounds.

I wasn’t able to benchmark these same games on other systems we had in the office in the time available. These standalone results do show, however, that this version of Hades Canyon can hold its own in contemporary games. Note that the PUBG experience may not be quite as good during hairier, frenzied moments: As a complete noob, I ended up largely wandering maps on the empty outer edges during those solo matches. 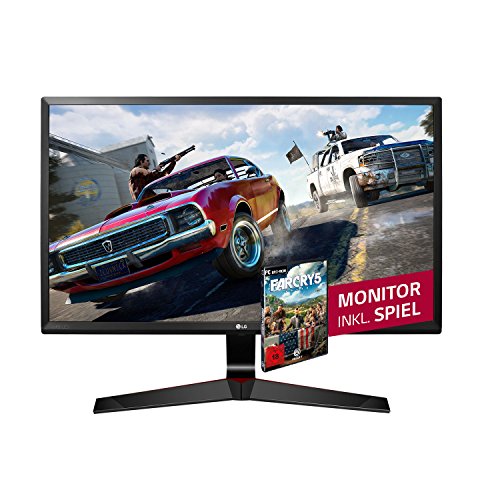 Again, remember that FreeSync is an option. As the NUC8i7HVK ages, FreeSync will be the cheaper option to keep games feeling buttery-smooth. (You can also get an external graphics card setup, but that’d demand a much greater cash outlay compared to the $100 to $150 you’d pay these days for an entry-level, 24-inch FreeSync monitor.)

As you’d expect by this point, the NUC8i7HVK readily handles older AAA games. In 2014’s Middle-earth: Shadow of Mordor, it held steady at 64 fps on the Ultra preset (and with the 4K texture pack in use). It did about as well in 2013’s Tomb Raider on the Ultimate preset, with a result of 61 fps. If you have a backlog of games to chew through, they shouldn’t threaten this tiny PC.

(Incidentally, if you’re wondering why the Tomb Raider result skewed closer to GTX 1050 Ti performance instead of GTX 1060 Max-Q: My best guess is that it relates to the greater role CPU performance has on Tomb Raider. It’s possible that the given the shared power management between the CPU and GPU components within the Core i7-8809G, CPU performance is throttled enough that it affects this particular game.)

It takes just a few minutes for most systems to generate the 3D scene. The 8th-generation processor inside the Core i7-8809G performed just as we expected: With its healthy clock speed bump over 7th-generation Kaby Lake Core H-series parts, it trails closer to the socketed CPUs in older, compact desktop PCs. Everyday tasks should be no sweat on this NUC.

Because Intel bills the lower-end variant of Hades Canyon as a content creation machine, we also turned to HandBrake, a popular encoding program, to put this NUC through its paces. Our real-world test involves converting a 30GB MKV file into a smaller MP4 using the Android Tablet preset, and it hammers hard on a CPU. Systems designed with poor or limited cooling will take a very long time to complete the benchmark, while PCs with beefier CPUs and better cooling will zip right through it.

As in Cinebench, the Core i7-8809G nips at the heels of older 91W parts. In concrete terms, this portable PC can complete CPU-intensive tasks in about the same amount of time as a two-year-old full-sized system.

To see how the i7-8809G handles thermals under a full CPU load, I ran HandBrake separately with Intel’s Extreme Tuning Utility open in the background. According to XTU’s monitoring tools, the CPU reached a max of 84 degrees Celsius while dashing along at an absolutely rock-solid 3.9GHz the whole time (just 0.3GHz below the maximum Turbo speed).

During testing, I recorded the various maximums for power draw using a Watts Up Pro. At idle, the NUC8i7HVK averaged about 13.8 watts. That’s just a hair under Skull Canyon’s average of about 14.6W at idle.

As for acoustics, the NUC8i7HVK was impressively quiet in our temperature-regulated office. That was particularly the case during pure CPU loads—I barely heard the fans at all during our Handbrake benchmark. Fan noise became audible only when the GPU was active, and even then, it was a rather mellow hum.

The NUC8i7HVK is capable of much more than I initially tested. Intel also touts this machine as an overclockable gaming and virtual reality machine. One idea that got bandied about was rolling your own VR backpack system: Pair it with a battery pack and your preferred VR headset, and off you go. I would have loved to discover what we drew in the silicon lottery, as well as seeing how easily I could dive into 3D virtual worlds.

That said, I still find the NUC8i7HVK to be a very solid PC—not just a mini-PC—and I believe that’s more important than VR and overclocking when evaluating it. VR still has relatively small traction, and Intel cautions that overclocking the Core i7-8809G requires careful consideration and patience due to its power design. Based on performance at stock settings, Hades Canyon is already an extremely worthy successor to Skull Canyon and gives other mini-PCs a run for their money.

What keeps the NUC8i7HVK from being a grand slam like its predecessor is the competition. While many who gravitate toward this NUC will do so because of its size, enough people will care more about performance than form factor and be better served by a different mini-PC. Zotac, in particular, blurs the line between mini-PCs and mini-ITX systems with its Magnus PCs, which come with a choice of GTX 1060, GTX 1070, and GTX 1080 flavors. For those who care about the most raw power available in the smallest possible form factor, they’re more appealing options.

Hades Canyon is a strong mini-PC that offers other possibilities as well. Consider that at just under three pounds, it weighs less than some ultrabooks—most people won’t even notice it in a backpack. If you don’t need a laptop’s included screen, mouse, and keyboard, it’s nigh impossible to beat Hades Canyon as an on-the-go PC, amply powered by its Intel CPU and discrete AMD GPU.