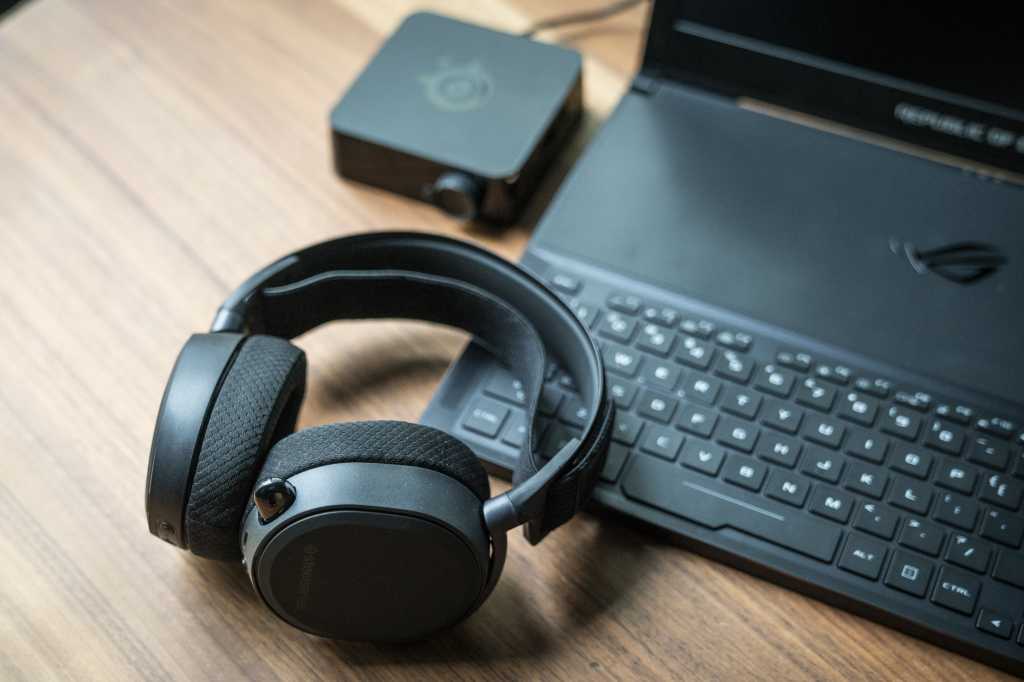 The Arctis Pro Wireless is easier to recommend in 2018 than its aging Siberia 800 predecessor, but its charging system feels less useful than it once did and the audio isn’t much better than the much cheaper Arctis 7.

What’s in a name, anyway? No seriously, SteelSeries really wants to put that old adage to the test. Back in 2013 I tried out the SteelSeries H Wireless—a premium $300 headset with swappable batteries, a bulky but eminently useful base station, and decent audio (for the time). Then the H Wireless was quietly rebranded as the SteelSeries Siberia 800. Then SteelSeries released the Siberia 840, the same headset but with added Bluetooth support.

And now it goes through its latest name-change, becoming the SteelSeries Arctis Pro Wireless. It’s still north of $300, still features the same swappable batteries and base station. Pretty much everything else has changed, though—for the better.

Conceptually, it fills the same role as the Siberia 800, but the Arctis Pro Wireless is a substantial redesign, bringing SteelSeries’s high-end headset in lockstep with the rest of the current Arctis lineup. In other words: If you’ve seen the Arctis 5 or the Arctis 7, the Pro Wireless should look familiar.

Basically, SteelSeries took the Siberia’s old floating-headband design and reworked it with new materials and a sleeker profile. When the Arctis line was first unveiled, there was lots of talk about “activewear,” and while SteelSeries seems to have backed off that message, the result is the same. The headband is a thin metal sheet with ski goggle-like material as padding.

It sounds weird but it’s incredibly comfortable. The biggest problem with floating headband designs is that they usually feel either too tight, causing an aching sensation on the top of the head, or (more often) they feel like they’ll fall right off. The Arctis Pro Wireless, like the Arctis 7 before it, straddles the line—it’s reassuringly tight, but also soft and supple enough for all-day wear.

The situation’s actually improved with the Arctis Pro Wireless. The Arctis 7 used a steel band for the basic structure, which was strong but relatively heavy. The Pro Wireless swaps to an aluminum band, which should prove just as durable but with less weight shifting around on your head.

The only catch is the headband runs a bit small. I’d wager I have a pretty average-sized head, or at least I don’t usually run into size problems with headsets, but I run up against the limits of the Arctis Pro Wireless. If you’re big-headed (literally, not metaphorically) you might want to look elsewhere.

In any case, it’s completely new territory for SteelSeries’s upscale headset. The H Wireless had a relatively tame, mall-electronics-boutique kind of look to it. The Arctis Pro Wireless is way more unique, while still retaining the understated branding and sleek look of a high-end device.

Shifting to the Arctis aesthetic also means ditching the old H Wireless’s circular earcups. Finally. With the H Wireless, I always found the tips of my ears brushing against the top and bottom of the padding. The Arctis Pro Wireless moves to generously sized ovals, and is leagues more comfortable as a result.

The basic functionality of the H Wireless carries over, though. The right earcup is topped by a magnetic cover. Pry it off and you’ll see a battery compartment. At any point you’ll have one battery in the headset itself and the other slotted into the base station, where it’s recharged.

It’s a unique feature for which I still have a soft spot. It’s also, to be honest, an increasingly useless feature—SteelSeries’s own Arctis 7 lasts up to 24 hours nowadays, as do many other competing headsets. The likelihood that you’ll run out of charge if you’re diligent about plugging in your headset every night? Basically nil.

But we’re not always diligent, and running out of battery mid-game is a pain. Most times, it means your wireless headset becomes temporarily wired as you wait for it to recharge. With the Arctis Pro Wireless, you just yank out the old battery (each lasts up to 10 hours) and put the new one in. Seamless.

The base station’s still great too. The key is it’s a useful wireless receiver, not just a generic dongle or a branded showpiece. Along with a battery indicator, all the functionality companies build into software—chat mix, EQ, surround sound—is easily adjusted through the LED screen on the front. You can either use the knob on the base station itself or use the controls on the actual headset. The volume wheel doubles as a click wheel, allowing you to navigate the Arctis Pro Wireless’s menus from across the room.

Huge time saver? Maybe not. I’ve always found it a fairly attractive-looking box though, and heaven knows I could use fewer crap software utilities in my life. It also opens the headset up to a wide range of devices. We’re fond of PCs here at this site, but the Arctis Pro Wireless will also handle 3.5mm aux signals and optical signals, both in and out. With Bluetooth support also built in, the Arctis Pro Wireless should connect to pretty much any modern device you own, and then some.

The Arctis Pro Wireless sounds way better than its predecessors, too. No surprise there—when reviewing the Arctis 7 last year, I said it sounded better than the Siberia 800. I’d certainly hope that the Arctis Pro would demonstrate similar strides.

Audio was never the H Wireless/Siberia 800’s strong suit though. It was a mid-tier headset with a high-end price, bolstered by a slick battery charging system (or “gimmick”) and a range of other niche quality-of-life features. I loved certain aspects of it, but the Siberia 800 was increasingly hard to recommend as the $150 wireless tier improved these past few years.

The Arctis Pro Wireless is much easier to recommend, or at least is a much better headset. Is it twice as good as the Arctis 7 and competing headsets in that price range? No. But SteelSeries has made improvements across the board.

The key: It just sounds a lot larger. My biggest quibble with the Siberia 800 was that even at moderate-to-high volumes it lacked oomph. It sounded thin, underpowered. The Arctis Pro Wireless has a fuller, richer sound, more all-encompassing. It has presence in a way the Siberia 800 never did, and a lot more volume headroom to boot.

That said, a lot of the Arctis 7’s missteps carry over. This is definitely a mid/treble-heavy headset, and no amount of EQ could get the bass quite where I wanted. I’m someone who actually likes a cleaner, subtler low-end, and even so, the Arctis Pro Wireless felt almost anemic on that front. The effect is particularly pronounced in music, where bass and kick drum parts get lost in the mix.

The effect is less pronounced in games, because the mix is usually less complicated. Still, you’ll notice it sometimes with explosions, as they lack the booming feedback you might get from other headsets. Cranking the EQ caused the low end to get muddy instead of loud though, which is just as undesirable.

It’s not a bad-sounding headset. Quite the contrary: less bass-heavy music and games sound impressively clean and precise. But like the Arctis 7, the Arctis Pro Wireless feels just barely better than average—not what you want from a headset that costs almost twice the competition, and indeed twice the price of SteelSeries’s other headsets.

The one saving grace is the microphone. Like the Arctis 7, the Arctis Pro Wireless uses a bidirectional microphone. That was a break from tradition when it was first implemented. Most headsets use unidirectional mics, then do noise canceling in software. SteelSeries went bidirectional because it both has a tighter pickup pattern and is better at filtering out background noise.

And it works. With our Arctis 7 review, I blasted music through an external speaker while recording into the microphone and was amazed how clearly my voice came through. I ran the same test with the Arctis Pro Wireless, and the same result—it cuts out almost all the music, and my voice comes through crystal clear. SteelSeries might not have industry-leading audio fidelity, but it’s nailed the microphone part of the equation.

The SteelSeries Arctis Pro Wireless is in a weird place, as is the Astro A50 nowadays.

As gaming headsets go, they’re both pretty great—the A50 has a slight edge in audio quality, the Arctis Pro Wireless has the better microphone and base station capabilities, both are super comfortable. But they’re also $300 headsets in an era where $150 headsets like the Logitech G533, the HyperX Cloud Flight, and yes, even SteelSeries’s own Arctis 7 have largely closed the gap.