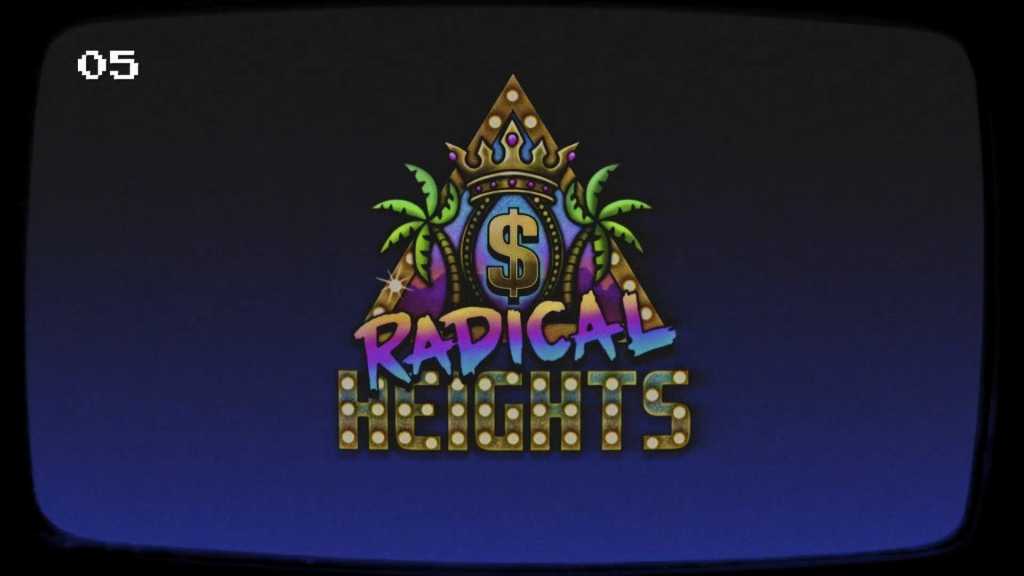 Last week Boss Key said it was moving on from Lawbreakers to a “passion project.” Now just a handful of days later that passion project is out on Steam. I didn’t expect such a fast turnaround, but the game is called Radical Heights, and it’s a free-to-play, ‘80s game show-themed battle royale shooter. Basically, it’s The Running Man.

Okay, “like” is maybe too strong a word for what’s here. I think it has potential though. Radical Heights cribs a lot of its best ideas from the arcade classic Smash TV, but I’m hardly going to complain about that. There’s an over-the-top announcer yell-talking bad jokes at you, there are “prizes” to pick up. It’s very much that sort of game show aesthetic, and it fits well with the low-stakes setup of battle royale matches.

Cash is the breakout difference between Radical Heights and its predecessors. Playerunknown’s Battlegrounds and Fortnite are both centered around the loot. You walk into a building, you vacuum up all the guns and helmets and whatever lying on the ground, you leave. Fortnite introduced “Vending Machines” recently, letting you trade crafting materials for items, but they’re still a secondary concern.

In Radical Heights, loot is more sparse. On the other hand, almost every building you enter has a cash register or change machines waiting inside. Smash them, and you’ll pick up cash. Other times you’ll find prizes, like a game console, and their cash value will be added to your total.

Once you’ve accrued a small fortune, it’s time to buy. There are weapon and gear vendors everywhere, selling everything from armor to remote explosives to guns. Run up to the machine, press “E,” and you’ve got yourself a shiny new toy. Don’t like what that one’s selling? Go next door and there’s probably another machine. They’re everywhere.

It’s a neat system, and allows Boss Key to twist the battle royale formula a bit. My favorite idea in Radical Heights is the ATM. At any point, instead of spending your accrued cash you can instead find an ATM and deposit it. That money then becomes available to you outside the match, to buy cosmetic items for example. But it also carries over—find an ATM in a future match and your money will be there waiting. Like Rogue Legacy or FTL/Into the Breach, it’s a forgiving system that makes it feel like you’ve made some progress even if you only ran around for 15 minutes and then got shot.

Guns feel better than in Fortnite, which is an admittedly low bar but still a point in Radical Heights’s favor. It’s not quite as hardcore as PUBG’s ballistics, but weapons at least reliably shoot where you’re aiming them.

You can also get around by bicycle, and pull off some sweet tricks while doing so.

Oh, and my favorite bit from Radical Heights: No parachutes. You just dive straight down, faceplant into the ground, and then get up and start grabbing cash. It’s fun.

Now for the bad.

I don’t know why Boss Key decided to release Radical Heights this early. Maybe the team is worried a flood of battle royale games will come in the next few months and it’ll be impossible to get attention? Maybe the Lawbreakers money was running out and Boss Key something needed to generate a bit of revenue?

It’s hard to know for sure, but suffice it to say Radical Heights is barely even Early Access. Sure, you can play a full match, but the experience is rough.

To start, it’s poorly optimized. That’s no surprise. Hell, PUBG still has optimization issues a year after its initial release. But it’s frustrating to be back at square one with a battle royale game. Watching people stutter to the ground, diving and then freezing in place and then diving again—this is early days stuff, and I doubt people who put up with that era for the novelty in 2017 are aching to do it with a me-too game in 2018.

Match pacing also desperately needs an overhaul. Like PUBG and Fortnite, the Radical Heights play area gradually shrinks as the match progresses. Very gradually though, in the case of Radical Heights. The first time I made it to the top 10 in a match, the pace of killing outstripped how fast Radical Heights could accommodate and shrink the map, eventually leading to six or seven minutes with almost zero conflict as we all sat content in our little fiefdoms and waited for the final circle.

Those aspects aren’t unexpected though. Optimization and pacing tweaks are why you do Early Access.

What is unexpected is the general lack of polish. I mean, the game’s free, so I guess Boss Key feels like it’s not exactly ripping anyone off by putting it out this early.

You only get one chance for that first impression though, and Radical Heights does not make a good one. Placeholder UI elements? Yup. Barely readable map? Yeah. Fully untextured buildings?

And if that weren’t bad enough, check out this radioactive spillage that’s apparently supposed to be a placid lakefront:

For every environment that looks well-crafted and fits the theme, like an arcade with that ‘80s-grid carpeting, there’s another that is basically gray-box prototype. Given how much Radical Heights leans on its aesthetic, peppering the map with generic parking garages and empty apartment buildings is a major misstep.

Is Radical Heights worth a look? Yeah, sure. It’s free, and I think the core game has some potential. It takes the cartoon aesthetic of Fortnite, pairs it with better guns and a more unified aesthetic, and strips out the crafting elements some people don’t like. Or if you’re coming from the other end, it’s PUBG-lite, with guns that actually feel good on mouse and keyboard but without the military trappings.

It’s very, very early days for Radical Heights though, and I’m stunned Boss Key put the game out this early. You’d think after Lawbreakers, they’d be wary of a game losing its player base too early—but I’m worried if Radical Heights doesn’t fix its issues, and fast, we might see a repeat. Already the game’s sitting at a “Mostly Negative” rating on Steam, barely hours after release. That’s not a great sign for the future.