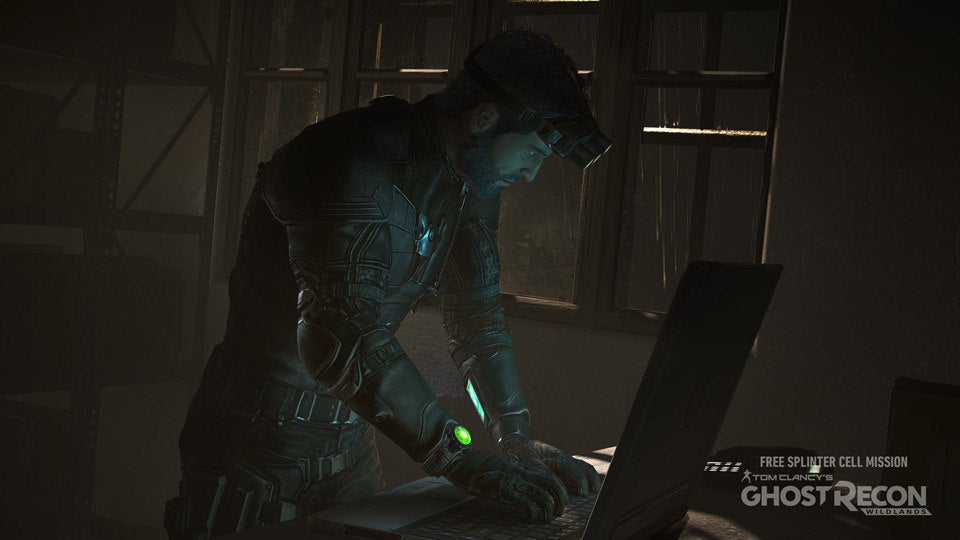 Lots of games-adjacent stuff happening this week. First, the sad news: SteamSpy is shutting down, or at least a shutdown is imminent if nothing else changes on Valve’s end. The second, still sad news: There’s new ransomware in town, and the only way to decrypt your stolen files? Play an hour of Playerunknown’s Battlegrounds.

Five years? It’s been five years since the last Splinter Cell? Hard for me to believe. It looks like Ubisoft might be ramping up for Sam Fisher’s triumphant return though—or at least, it looks like he’s not entirely forgotten. Proof? He’s in Ghost Recon: Wildlands, of all things. There’s a new “Special Operation” featuring Sam and his night vision goggles. And even better, they brought back Michael Ironside as the voice actor.

If that piques your interest, good news: Wildlands is free all weekend.

A few months ago we wrote up some changes Blizzard was testing for Warcraft III—widescreen support, balance tweaks, 24-player multiplayer matches, and more. The good news is those changes finally made their way off the test server and into the base game this week. No more stretched-widescreen! Now you can keep the game looking crisp and clean (albeit by putting big black pillars on the sides of the screen).

The bad news: Roll-out sounds rocky. I’ve seen people report issues with everything from cinematics to windowed mode to just getting it to launch period. Hopefully those problems are cleared up soon. Oh, and hopefully this is a sign we’re getting a Warcraft III remaster this summer?

It’s been years since I first saw Worlds Adrift, Bossa’s MMO-sandbox about flying ships and grappling hooks. Hard to believe in all that time, it’s never come to Early Access—but indeed it hasn’t. Soon though! After plenty of closed testing, Worlds Adrift is scheduled to finally hit Early Access on May 17, and there’s a trailer showing how far the game’s come. Lots of very pretty scenery on display.

Pour one out this week for ol’ SteamSpy. I’ve used the tool a bunch in the last few years to check how various games are selling—data both Valve and developers are notoriously reticent to provide. SteamSpy used people’s publicly accessible profile data to estimate PC sales, which isn’t 100 percent reliable but (thanks to the magic of math) was usually close enough to make some judgments.

Valve’s changed their privacy settings though, making them both more granular and adjusting the defaults to more protective stances. The upshot: The games you own are now hidden by default, which makes it basically impossible for SteamSpy to operate. Too small and self-selective a sample pool.

Given the privacy kerfuffles at Facebook, kudos to Valve for giving users more options—but it’s a shame SteamSpy got caught in the fallout. Hopefully this is predicated on Valve being more open about sales data? We can dream.

The “moody version of upbeat pop song” trend continues with Vampyr, which layered its latest story trailer with a somber version of “Don’t Fear the Reaper.” Bit on the nose, eh?

Anyone still playing Destiny 2? Those of you who’ve fallen off and are desperate for a reason to go back will probably be excited to hear the next expansion’s got a name: Warmind. Sounds like Rasputin’s making a comeback, Guardians.

Just a name so far, in any case. There’s a trailer coming April 24, with the expansion set to release May 8. Other than that, the development roadmap’s been updated. Can you believe clan chat is still months away? Oof.

It’s been four years since CCP told me about “Project Legion,” a modernized FPS follow-up to the short-lived Dust 514. It’s been another two years since I first played “Project Nova”— basically the same thing, under a different name. And since then…nothing. That was pretty worrisome given how many studios CCP shuttered in 2017.

News out of 2018’s EVE Fanfest sounds like Nova is still in development though. Specifically, PC Gamer has CCP’s Hilmar Pétursson saying the game will be “playable” on PC later this year. Early Access, maybe? No idea.

Also worth mentioning that there’s a second Empires of Eve book in the works. The first is one of the best video game books I’ve read, summarizing some of EVE Online’s biggest wars, most notorious backroom deals, and the general politicking that makes the game so interesting—but in a way that’s engaging to people who don’t play EVE too. The Kickstarter’s already more than reached its goal, so maybe check it out.

I keep meaning to go back to Galactic Civilizations III. From what I’ve heard the first expansion, Crusade, fixed a lot of the game’s original problems. And now I’m two expansions behind, as the Intrigue expansion released this week, bringing with it planetary governments, commonwealths, crises, and more. So many 4X games, so little time.

Monster Hunter: World isn’t due to hit PC until sometime this fall, which means there’s still six months for someone to swoop in and steal that audience. Will it be Dauntless? I’m not sure, but they sure are trying. The game’s due to hit open beta on May 24, and all you have to do is sign up here. Might as well give it a go.

No new trailer, so have a look at this one from the closed beta a few months ago:

Final story for the week, and before we start let me say: Ransomware sucks. But if you’re going to click on a dubious link and have your files locked away, the new “PUBG Ransomware” discovered by MalwareHunterTeam is probably a best-case scenario. It encrypts all the files on your system, and the only way to get them back?

Play an hour of PlayerUnknown’s Battlegrounds. No, seriously. Okay, you can also just type in a code if you’d like—it’s about the friendliest ransomware imaginable. But hey, any excuse to play PUBG right? (Via Bleeping Computer)