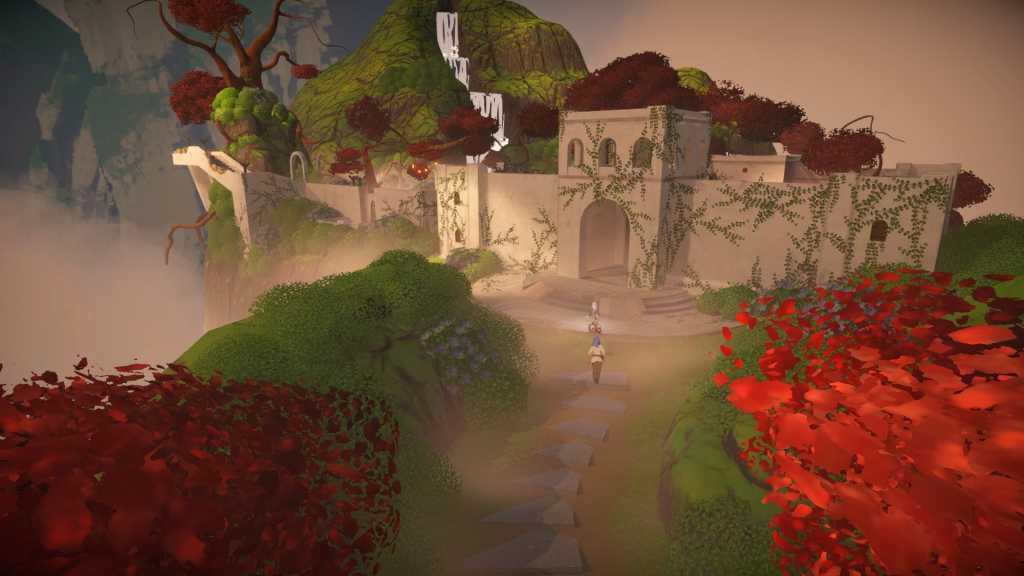 I’m agonizing over a translation. What I’d thought was a simple piece of driftwood washed up on the riverbank is now a test, of sorts. The wood is old, worn down, but still there are remnants of symbols, letters in a language I’ve only seen twice before—and it’s my job to discern the intent. Where did this wood come from? Why did someone painstakingly carve letters into it?

A few clues guide me. My character thinks the wood probably came from a ship’s mast, for one. And two, a series of symbols resembles some other symbols I took to mean “strength” a few minutes back. That’s it.

Grasping at straws, I mutter something about “Wind” and plug that in as the translation. It doesn’t seem like a perfect fit, but…well, sometimes in Heaven’s Vault you just have to go with your gut.

I actually demoed Heaven’s Vault at GDC last month—my first real hands-on time with the game after a largely developer-led demo the previous year. But when Inkle offered to send me a build, I jumped at the chance. It’s a small piece of the whole, just a single location on a single planet in an adventure that’s supposed to span an entire nebula of planets at release.

There’s something about Inkle’s games though, the way every tiny choice branches in a dozen different ways, the way the Ink Engine resurfaces small decisions in interesting ways. At GDC, Inkle’s Jon Ingold told me he’d seen four people run the demo and it played out four different ways. Having now run the demo four times myself, I believe him.

The key moments are the same each time. Playing as space-archaeologist Aliya Elasra, you arrive on an abandoned but verdant planet with your robot companion Six. Up the hill from your ship there’s a large complex of ruins, which you explore at your leisure, and probably translate more than a few words in an unknown language. And at the end of the demo? You likely come into contact with the preserved consciousness of an ancient being, or maybe just their memories. Hard to tell. Then Aliya and Six take their accumulated knowledge and jet off to the next adventure.

But even where the framework is the same, context can differ wildly. As you approach the gate into the ruins, an ivy-covered placard on the wall beckons. It’s likely the first translation players encounter in this build, and a relatively simple one, only three words. Still, it’s in a language wholly foreign—because it’s invented. As Inkle’s Joseph Humfrey told me last year, “You’re sort-of doing the process an archaeologist would if they looked at cuneiform.”

That means using the environment to inform your efforts. Aliya gives you a few possibilities to work with. The first word, for example, probably means either “Garden” or “Temple.”

Either works, and either is perfectly valid. There’s what looks like a greenhouse inside the ruins, and the area is obviously overflowing with plant life. “Garden” fits. But there’s also a vaguely religious-looking statue in the main courtyard, and further in the player encounters what seems like graves. “Temple,” then? Or hmm, perhaps they’re not graves but memorials. In that case, maybe garden is correct?

Ultimately it doesn’t really matter—the game continues regardless of which you choose.

And yet it matters a lot. If the player approaches the ruins first and foremost as a temple, obviously any items within are infused with religious meaning. The aforementioned statue? Probably a god of some sort. Graves? That’d probably make this a cemetery of some sort. An innocuous carving of an eagle on the wall suddenly has to fit within the religious framework, and later translations might skew in that direction. A player might choose “eternity” over plain ol’ “death” for instance, hypothesizing an object has a loftier meaning.

Approach the ruins as a garden, suddenly that religious framework disappears. This might still be a spiritual site of sorts, but maybe it’s a memorial to those who died in an age-old war, or a mausoleum for rulers of a forgotten dynasty.

Maybe the player doesn’t even spot this translation at all. I didn’t, my first time. There’s a path around the side, and I made a beeline for it—assuming, rightfully, that the gate was locked. Thus I missed both “Temple” and “Garden,” relying on my own instincts to tell me the story of these ruins.

One choice, three different experiences. This is the magic of the Ink Engine: Small choices, so small they’re insignificant, that still manage to have widespread repercussions because they affect the way the player thinks. Temple, garden, or no context at all, it doesn’t affect how events play out, but it affects the context in which those events take place, and thus in some small way it affects everything.

There are more obvious constraints too. The demo ends with a resurrection, of sorts. Turns out the graves/memorials/whatever are actually projectors of some sort, and once powered are able to summon the preserved consciousness of the deceased. A conversation ensues, with the person not-wholly-aware they’re long dead and Aliya dancing around that fact to extract information.

And yet before you can answer all your questions, the power source runs out and the connection is severed. What questions you asked, and the tact with which you asked them, can inform your understanding of the place even more—and your knowledge of where to journey next.

What’s most amazing about Heaven’s Vault though is that every path feels valid. Having now gone through the demo four times, as I said, I’ve come away each time feeling like “Well, actually maybe that was the correct one.” Translations that seemed ludicrous my first time through seem less outlandish in a different light, and occasionally there’s a eureka moment where new information changes the context of the old and prompts a reexamination of all clues to date.

It’s—and I don’t say this lightly—like nothing I’ve ever played before. Bound for a niche audience of linguistics wannabes maybe, but rarely has a game provoked so much emotional investment from me with a handful of scribbled symbols. Safe to say Heaven’s Vault is one of my most anticipated games of 2018, and Inkle one of the most exciting studios working today.