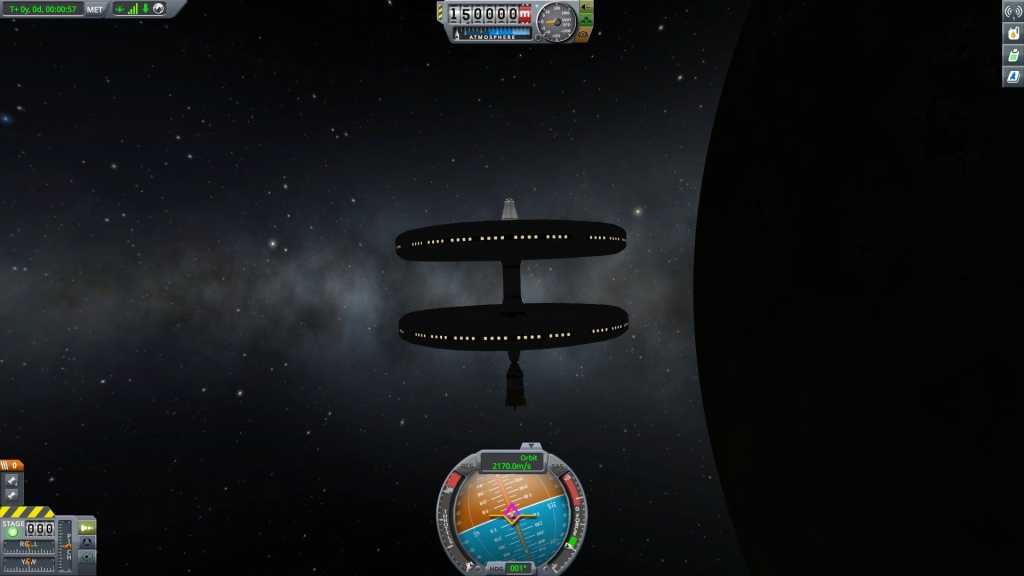 It’s been a while since I’ve dug into Kerbal Space Program. Not really a surprise—after all, it’s been three years since it emerged from Early Access, not to mention the countless hours I put into the game before that. At some point I did everything I wanted to do, or at least everything I had the (rough and unpolished) skills to do.

So I was excited to hear about the $15 Making History expansion, Kerbal’s first ever paid add-on. With that as its claim to fame, I was sure we were in for something special. The reality? Not quite so rosy. But hey: It’s an excuse to pull Kerbal Space Program out of the backlog and place it front-of-the-line again. The base game is one of the most fantastic PC gaming experiences ever created, so maybe that prod to play it again is enough.

Kerbal Space Program has always been a fairly freeform experience. A space sandbox, if you will. Even the career mode, which doles out parts and money as you accomplish specific tasks, still leaves most decisions in the hands of the player. Contracts in the career mode are usually broad goals, like “Launch your first vessel!” or “Escape the atmosphere!”

That’s it. Even the wording leaves wiggle room. “Vessel.” Not rocket, not spaceplane, not shuttle or satellite or duct-tape death trap. Vessel. From the start, Kerbal is determined not to constrain your imagination.

Which makes Making History a bit of a departure. “Missions” are Making History’s key feature—more structured pursuits, separate from both the career and sandbox modes. If you’ve ever visited Kerbal Space Program’s boards, it’s actually very similar to the Challenges subforum.

Before Making History, it went like this: Someone on the boards would issue a challenge, often drawing from real life, like this post from last year of people replicating the Orion spacecraft. Then other users would post video and image documentation of their attempts. Cool, right?

Making History formalizes this process. Using a built-in node editor, you can theoretically set up any mission you’d like. Want to replicate an old Gemini mission, including the real-life orbital parameters? Or maybe you’d like to run players through a simulation of 2001: A Space Odyssey?

Both those missions exist. Here’s one for Gemini III. Here’s the two-part 2001 mission. The latter is particularly impressive to me, given the amount of scripting it must’ve taken. Making History’s built-in missions are more stock-standard, but a Gravity-inspired mission early on is also inspired and speaks to the mission editor’s depth. There’s a lot of potential.

There are a couple of problems here, and if I’m being honest the first is pretty situational: The game’s been out for seven years now, in some form. Five on Steam. Three as a “finished product.” While I don’t want to imply that everything under the sun (or Kerbol) has been done, it kind of has for a lot of players. The reason the 2001: A Space Odyssey mission feels so novel to me is because it’s so heavily scripted, and walks me through a bunch of situations I wouldn’t maybe have tried otherwise. But Making History‘s built-in missions are weirdly simplistic, like “Land on the Mun” or “Build these three rockets.” A lot of the user-generated content follows the same pattern, with missions like “Space Shuttle Simulation” and “Apollo 13.”

While it’s cool you can potentially download these missions and load them up at any time from the main menu (instead of trying to recreate the circumstances in a sandbox), a lot of it nevertheless duplicates what a dedicated player has probably tried in the past, especially given Kerbal’s dedicated mod community. There are a lot of amazing (and accurate) rockets out there for you to try.

So it’s not a great fit for veterans. It’s also not a great fit for newcomers though, thanks to an ultra-punishing save system. Remember how I said Making History grew out of the Challenges subforum? Well that includes a scoring system for each mission. The better you do, the more points you score—and you can then easily compare your results against others. Again, cool in theory, or cool for a particular niche of users.

But the end result is you can’t make a mistake. The first built-in mission asks you to build three rockets and successfully launch them. This is Kerbal, so you’re bound to mistime a stage separation or whatever and blow up a rocket. Normally no big deal.

In a mission though, that’s it. One mistake, even on the third rocket launch, and you have to start the whole mission from the beginning. It’s hardcore, and not really in a fun way. In fact, I’d argue it runs counter to the entire ethos of Kerbal, which has always been a fairly low-stakes sandbox.

These are the expansions biggest problems, I think. It’s just not very interesting for veterans, who are likely to have set themselves these goals in the past, to think “I should do this” and then tried it out. And for newcomers? It’s too punishing to be a good teaching tool. You’re better off sticking with the sandbox or even the career mode.

I could list some other problems. The node editor is convoluted and over-complicated. I appreciate that it probably needs to be that way in order to have the depth it does, but it means most people are going to take one look at it, maybe press a few buttons, and leave. Mario Maker this is not. Also, the new parts are hit and miss. A few are useful, but most are just alternatives to existing parts, and the rest were mostly available through mods already. I like the idea of more historically accurate rocket pieces, but it’s a small part of an already-small expansion.

And yet, as I said up top, it’s great to have an excuse to go back to Kerbal Space Program. If nothing else, that’s where I land. I played a few missions, and then I found myself back in the sandbox, building dumb 20-engine rockets and half-broken spaceplanes and all the ridiculous cartoon-sim nonsense that endeared me to Kerbal Space Program in the first place.

Back in 2015 when I wrote our 1.0 review, I called Kerbal “The embodiment of everything that’s noteworthy and valuable about PC gaming.” I stand by it. The core of Kerbal Space Program is still fantastic.

Do you need to buy Making History to experience that? Absolutely not. While that 2001: A Space Odyssey mission hints at more exciting user-created missions on the horizon, at the moment there’s nothing to elevate Making History above the baseline Kerbal Space Program.

On the other hand, it took three years for Kerbal to release a paid expansion. And it wasn’t empty space. There were three years of free updates in the meantime.

That doesn’t entitle Kerbal Space Program to more of your money, but I almost feel like I owe them the $15 given how much fun I’ve had with it over the last five years. Hell, I hadn’t even touched it since probably late 2015, but Kerbal was still installed on my hard drive. It’s a forever game for me.

Not the most rousing recommendation for Kerbal Space Program’s first paid expansion, maybe. “Buy it and think of it as a tip jar.” But hey, very few games are this special. Hopefully community support turns Making History into a history-making expansion. Until then, well, I’m glad I had a reason to launch a few more Kerbals to their untimely deaths, even if Kerbal Space Program itself wasn’t quite so supportive of my efforts this time.