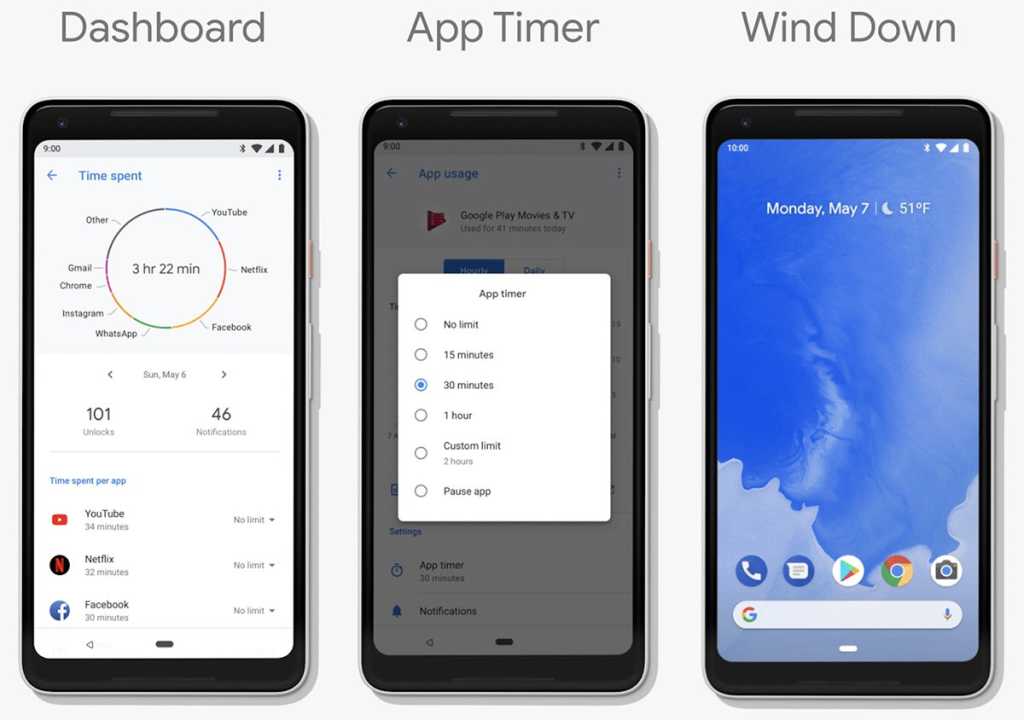 Along with updates to Google Assistant, Lens, Gmail and just about every app with the word Google before it, there was one unveiled at I/O that isn’t about enhancing Google’s ecosystem of services. In fact, it’s about using all of them less.

Baked deeply into Android P is a set of tools Google is calling Digital Wellbeing, and it’s all about balancing your digital life with your real-world one. Through a series of settings, options, and features, Google wants Android P to be the least-used version of Android, and it just might make us love our phones even more.

The bitter truth about app usage

The premier feature of the new initiative is Android Dashboard, which provides a snapshot of your daily usage, not unlike the Battery tab in Android Oreo. But instead of showing you which apps are causing your battery to drain, the screen will show you exactly how long you’ve used your phone each day, as well as the apps that have gobbled up the most of your time. Think of it as nutritional labeling for phone addicts.

Among the data presented on the exhaustive Android Dashboard is how many notifications you’ve received, and how long you’ve used each app on a daily and hourly basis. When confronted with all these details, you’ll likely be shocked by just how many hours you’ve been staring at your phone’s screen—and that’s the point. And the reports extend beyond your phone. For example, your entire YouTube watch time will be collected, whether you’ve been playing videos on your phone or a PC.

It’s a bold strategy for a company that makes phones and apps. While cigarette makers have a long history in fighting regulations designed to warn customers about the harm their products cause, Google is voluntarily sharing potentitally alarming information directly on our devices. As Google explains it, the Digital Wellbeing initiative is a response to customer concern, and not any attempt to get ahead of regulators.

Curbing addiction one app at a time

But the Android Dashboard is just the beginning. Google is also giving us the tools to help curb our smartphone addictions, with new features and settings designed to force us out of apps and into the real world. Google CEO Sundar Pichai even coined an acronym about it: JOMO, or joy (not fear) of missing out.

To help users put down their phones, Google has built new controls into Android P to manage how and when you use your phone, including app timers (so if you’re using a specific app for more than, say, 30 minutes, you’ll get a warning), and automatic enabling of Do Not Disturb when you rest your phone face-down on a table. The Do Not Disturb button is also way more powerful, removing all notifications from your phone when it’s switched on, even ones you’ve already received.

It’s a stark contrast to Apple’s overall lack of parental controls in iOS X. The iPhone maker was taken to task earlier this year for ignoring smartphone addiction in kids, something that Google already tackled with its Family Link app. The Digital Wellbeing initiative is very much a preemptive strike against iOS 12, which is expected to include some form of controls to limit kids’ screen time. Unless Apple does something similar to what Google has implemented in Android P—which seems unlikely—it won’t be enough.

Turning mindless interactions into meaningful ones

Google is making a statement to Apple and everyone else with Digital Wellbeing in Android P: Smartphone addiction isn’t just a problem that affects kids. I already know that I’m going to be horrified when I see my daily phone stats in Android Dashboard, but a visual representation of how much time I’m devoting to my screen might spur me to set some personal limits on my phone. It’s like if Marlboro started handing out nicotine patches with every carton of cigarettes—lots of people would try them out even if they didn’t plan to fully quit smoking.

Google’s plan with Digital Wellbeing isn’t just to make us appreciate life outside our screens, it’s also to make the interactions with our phones more meaningful. Our days are filled with dozens of meaningless interactions with our phones—unimportant notifications, mindless social media checks, time-killing games—and Google wants to help us cut all of that out of our life, if we decide to opt in. It’s not so much about using out phones less, but concentrating the time we spend with them into the things that are most important.

And that extends to the biggest detriment to our well-being of all: late-night phone use. With a feature called Wind down, Android P phones will fade to grayscale at the end of the day and turn on Do not disturb at bedtime, so we’ll be less tempted to get lost in a YouTube hole when we’re supposed to be sleeping. It’s just one more way Google is encouraging us to balance our lives and restore some sanity to our digital mental health.

During the I/O keynote, Pichai said Digital Wellbeing was a “deep ongoing effort” that extends beyond the walls of Google’s labs. It’s a four-pronged plan that deeply involves the user in order to understand our habits, focus on what happens, switch off, and find balance for our families. And it just might make us appreciate our phones even more too.