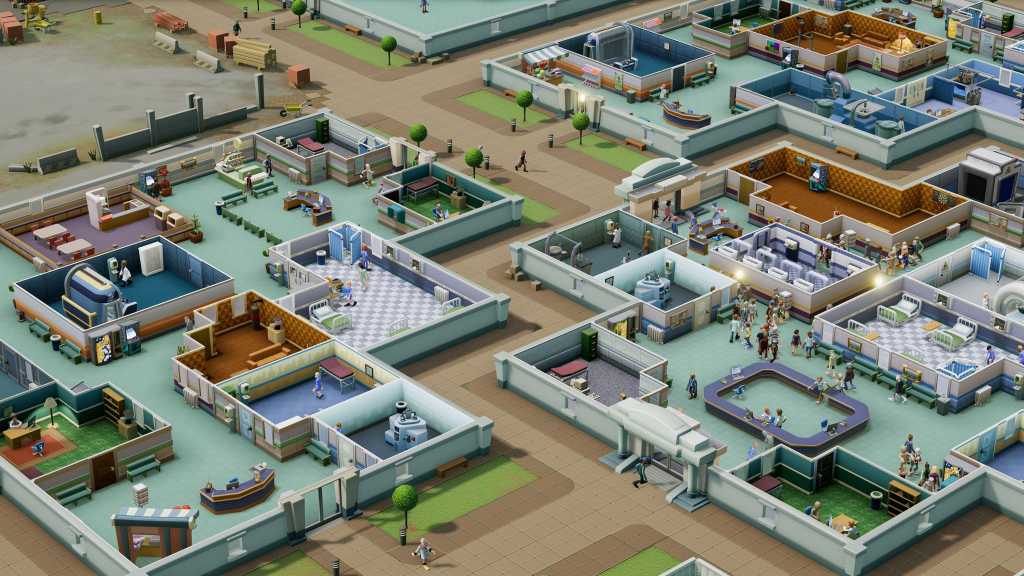 And yet it was, and continues to be. Awkward interface aside, Theme Hospital is still one of the all-time great builders, and still well worth playing in 2018. It’s high time someone came along and “borrowed” from it to create a spiritual successor.

What better people than the ones who made it the first time?

An apple a day

Point being, this is about as genuine a spiritual successor as you’re liable to get.

And it shows, too. From your first moments with Two Point Hospital, the game seems to be wink-wink-nudge-nudging you, “Hey, remember Theme Hospital?” You start with an empty building. You place a receptionist’s desk and hire someone to staff it. Then you build a “GP’s Office,” hire your first General Practitioner, and give them a desk, a filing cabinet, and a chair.

If you’re feeling a bit of deja vu, it’s because that same series of events is lifted straight from the beginning of Theme Hospital, down to the filing cabinet. I can’t decide whether it says more about Two Point Hospital’s credentials or about how little the process of visiting a doctor has changed in the ensuing years. Probably a bit of both.

In any case, Two Point Hospital emulates its predecessor to an almost slavish degree, and that’s not a bad thing. I recently spent an hour or so with an early build, crafting a basic clinic and (if we’re being honest) not doing a great job of it. Many people died.

A normal hospital sim, that might be a tragedy. Luckily Two Point Hospital couches the grim affairs of life and death in enough humor to keep it fun. Those who died often went on to haunt the few patients lucky enough to stay alive, turning into ghosts who wandered the halls—at which point my janitor sucked them into his vacuum cleaner.

Therein lies the magic of Two Point Hospital, and of its predecessor. It defies all logic, but somehow Two Point Hospital makes health care an engaging and entertaining subject. Whether it’s the sardonic voice over the PA system, or the weird quirks your doctors exhibit (“Talks at just the right volume”), Two Point Hospital is bursting with personality.

My demo clinic was primarily tasked with curing “Light Headedness,” which to you and me would mean a bout of dizziness, maybe some vertigo. At Two Point Hospital, it means suddenly your waiting room is filled with people who look like they stepped out of a Magritte painting, suited men and women with lightbulbs for heads. Off to the De-Lux Clinic with them. (Get it?)

As I said, it shouldn’t work. Other builders, they’re flashy. In Theme Park/Roller Coaster Tycoon/Planet Coaster, you’re creating these wondrous amusement parks. In SimCity and Cities: Skylines, you’re laying out these enormous metropolises. In Two Point Hospital, much of your time is spent deciding whether to put the trash can to the left or right of the door, or determining how many beds you need in your recovery ward. It’s so very ordinary.

Maybe the mundane nature of it is Two Point Hospital’s appeal, though. Going to the doctor is a shared experience. Somehow you can walk into a hospital in California, in Kansas, in Ontario, in England, and they all look and smell and sound the same. There’s always a selection of magazines nobody cares about, ugly carpet and tile, the cheap wood-veneer desk, that ratty rack of leaflets covering every sort of malady, the greenish fluorescent lights humming along quietly.

Two Point Hospital captures that experience, and then gives the player control over it. Lets them poke fun at it, laugh in the face of illness and the convoluted bureaucracy of the health care industry alike. It’s a weirdly political game, but in a low-key subversive way that manages to say a lot merely by reproducing the awkward tangle of systems found in the real world.

It’s as fascinating and pertinent a commentary now as it was in Theme Hospital, 20 years ago.

What Two Point Hospital does is modernize it all, mainly on the technical side. You can rotate the camera, for instance. That’s bound to be a welcome improvement, as Theme Hospital’s fixed isometric camera was a pain even at the time. It’s a relief to spin around and place furniture just so.

And I also can’t understate how excellent building out a hospital feels here. That aspect of builder-type games doesn’t often get attention because when it’s done right, you rarely notice. Two Point Hospital is incredibly satisfying though, allowing you to lay out a room and place all its furniture in blueprint mode, then watch it spring into place with a jaunty animation after you’re done. You can also pick up and move entire rooms after the fact, which while wholly unrealistic should help mitigate some of the micromanagement Theme Hospital’s later stages always devolved into.

There are also the usual interface upgrades. Two Point Hospital is much more clean and parsable than the jumble of icons in Theme Hospital, and while aspects could still use work—especially notifications about unhappy employees—it should make managing your hospital more, well, manageable.

All in all, I’m impressed. Theme Hospital’s always seemed like a tough act to recreate, but luckily nobody’s tried in 20 years. That means Two Point Hospital can play it safe, lifting most of its ideas wholesale from its predecessor without feeling like a retread. It’s still an oddly engaging concept after all this time.

Work still needs to be done, of course. Pathing was particularly problematic in the demo build, with patients stacking up in unholy jumbles in the waiting room for instance. But what’s here seems promising, both for longtime fans who’ve waited two decades for a followup and newcomers who perhaps weren’t even born then. Everyone’s gotta go to the doctor sometime.