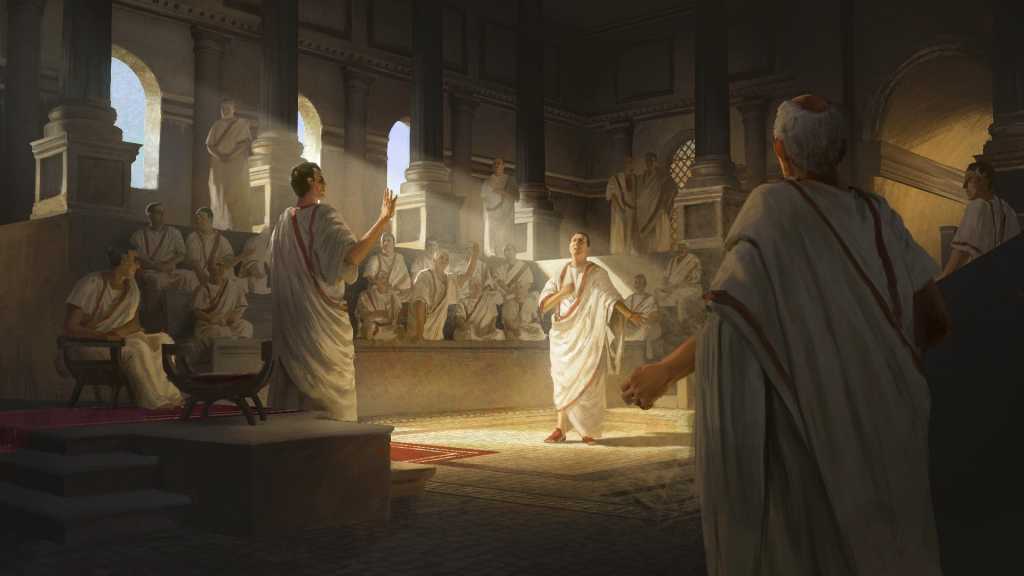 The hardest part of writing up Paradox games these days is trying to extrapolate where they’ll be in three or four years. A pioneer of games-as-a-service, Paradox’s grand strategy titles have a habit of growing into their skin over time, reinforced and patched up and given additional depth by an efficient (almost too efficient) post-release plan.

So taking a first look at the newly announced Imperator: Rome feels almost meaningless in some ways—even more so when it comes by way of a hands-off presentation. But spending an hour with the game left us with some initial impressions and information.

I’m going to break with convention and say that, at least in theory, I’m more excited for a Paradox grand strategy game set in Ancient Rome than I would be for Victoria III, the game fans have requested (read: demanded) for years now. There’s so much flavor to Roman history. More than perhaps any other era, Rome lends itself to the “Great Men of History” idea. Julius Caesar and Pompey. Augustus, and his descendants both surprisingly competent (Claudius) and criminally the opposite (Nero). Spartacus and his slave rebellion. Marc Antony and Cleopatra. And from outside Rome itself, Hannibal, Pyrrhus, Jugurtha, and Boudica.

Chaos lends itself well to a Paradox title though. There’s a lot for Imperator to draw on, at least in theory.

I keep repeating that phrase because little if any of that flavor was on display in our presentation. As I said, it was completely hands-off—a bit surprising given this game is reportedly due to release early next year. Disappointing too, as I find Paradox’s games really lend themselves better to a hands-on presentation. It allows different players to drill down into the aspects they enjoy most.

That’s how you end up with my Europa Universalis IV review. Take a game focused primarily on combat and colonization, put it in my hands, and I’ll have more fun turning Portugal into a global trade empire and manipulating my enemies into conflicts with each other.

A hands-off Imperator presentation doesn’t allow for that flexibility. Most of what I can bring you is facts. The playing field consists of 400 separate provinces, spanning from modern-day Britain to the Horn of Africa, from Portugal to India, and from kingdom to republic to tribe. You’ll take control, be it of Rome or some other territorial power, in 304 BCE—already a full 450 years after the founding of Rome, but just as the Republic was starting to expand in earnest outside its traditional tribal bounds. Not too surprising.

What is surprising is that Imperator, despite being named for a term most associated with the Roman Imperium, ends before it really begins. There’s no true end date, at least so far as we’ve heard, but the “canonical” end date as told to us by Paradox is somewhere around 32 AD.

That decision makes a certain amount of business sense. After all, it’s perhaps tricky to navigate the death of Jesus Christ in a game where you play the villains of that story.

But when asked, Paradox’s Johan Andersson said the decision is as much mechanical. As he said, “It’s no fun to lose,” the implication being that the slow crumble of the Roman Empire isn’t fit for adaptation. I’m not sure I agree, and imagine that a more personality-driven game like Crusader Kings II could pull it off. My proof? Crusader Kings II is, as any longtime player knows, often more fun to lose than it is to win. That’s why it’s is so brilliant, and I suspect why it’s kept people engaged six years after release.

Imperator: Rome is being set up as a wargame though. As Andersson told us, Imperator is a game about “painting the map red,” be it with blood or with the colors of the Romans. Choose your metaphor.

In any case, it’s about the state first, the personalities second. And sure, that sort of game can be frustrating to lose, if only because there’s rarely enough depth to the other parts of the game to make losing interesting. See: Hearts of Iron IV. If the cultural flavor isn’t there, if losing is just a matter of featureless units smashing against each other in a war of attrition, it’s absolutely not going to be interesting. This is my worry with Imperator.

It could be a completely unfounded fear, of course. Paradox didn’t show us much of anything story- or event-driven, but it’s entirely possible these aspects just aren’t finished, and thus not fit to show. It’s worth noting that Andersson is also a mechanics-centric designer, like the Gary Gygax of Paradox—more focused on numbers than the stories around those numbers. And he knows it. Interviewing him after the presentation, he said “That’s sort of my design philosophy. In the games where I’ve been a full designer, it’s always been conquer the map. I find that game mechanics make stories on their own.”

So assuming those more story-centric moments are in Imperator, it could be he just didn’t prioritize them for our presentation. It’s a shame though because those are the bits that interest me most. I’m not a combat-driven player, nor much concerned with numbers. I’m more interested in seeing how the introduction of Hellenism influences a society, or politicking with the Senate and the Patrician classes, or trying to ally with Carthage instead of salting the earth. Role-playing, by way of a strategy game—even if the role I’m playing is “the entire Roman Empire.”

These ideas are present in Imperator to some extent. If I understood correctly, players can restore the Hellenic pantheon to prominence, which would make for a fascinating scenario. The Senate will also play into the game, plus factions aligned with prominent Roman families. You could find Rome split asunder by disagreements among the ruling classes, and popular generals can even turn against the state and incite civil war. Given how often that happened in real-world Roman history, I’m glad Imperator accommodates that particular disaster.

We didn’t really see any of this in action though, nor did we get a feel for how much these wrinkles will play into the game. These scraps were mentioned in passing, confirmation certain systems will exist and left at that.

What I’m left with is basically a single concrete impression: “The map looks gorgeous.” And it does—this is Paradox’s best work, almost Total War-esque. Over 7,000 cities dot the map, and they’ll grow dynamically along with a province’s population. Rome at the Republic’s height should look like, you know, Rome at its height. Given how busy Paradox’s simulations are moment-to-moment, this level of detail is impressive.

But I thought Hearts of Iron IV was beautiful too, and I don’t feel drawn to go back to it often. My biggest fear is Imperator: Rome is a different map with all-too-familiar ideas underneath, one where the unit names and the provinces and so on have changed but at the end of the day you’re still pursuing the same goals as Europa Universalis IV or Hearts of Iron. If you’re a combat-centric player that might sound right up your alley. Not so much mine, though.

I hope I’m wrong. It’s hard to tell with any hands-off presentation, let alone one as complicated as a Paradox grand strategy game. Maybe Imperator is packed full of Roman-era flavor, and it just doesn’t show well in the constraints of an hour-long lecture. Or if not at release, perhaps the game finds its footing three or four expansions later when the Mediterranean’s secondary factions have been given their due. I certainly hope so, as a fan of the era.

There’s not much appeal to me though in simply painting a map my color, and thus not much appeal in a presentation centered on that idea. I want the drama. I want Caesar crossing the Rubicon. I want Augustus outmaneuvering the triumvirate to seize the reins of power. Hell, I want John Hurt killing a baby or dumping out “Neptune’s Treasures” while Claudius lingers in the wings.

I think Paradox can make that game. I just don’t know if they are or not.