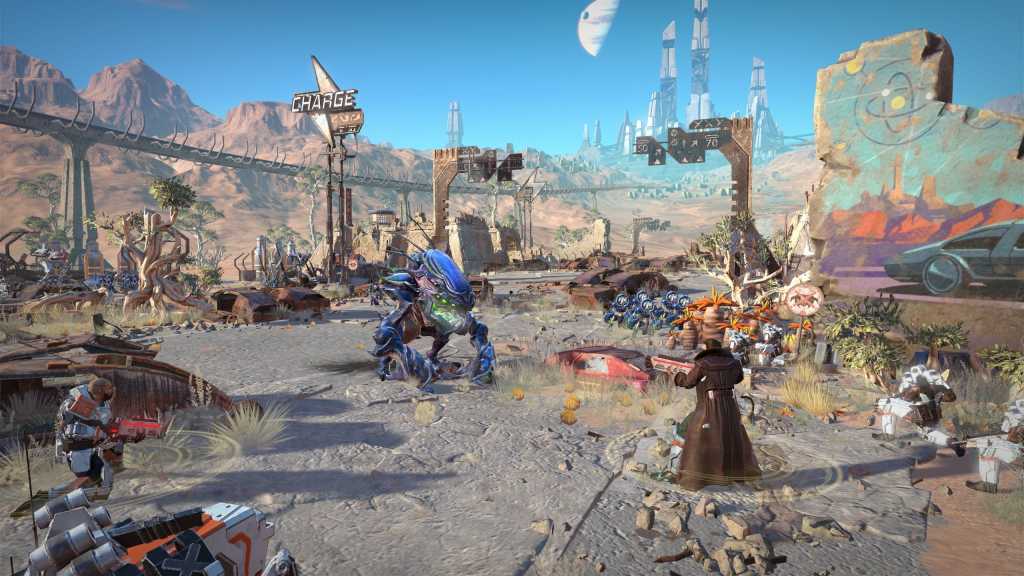 Age of Wonders needed a hook, and I think Triumph finally found it.

Writing about Age of Wonders III back in 2014, one of my biggest complaints was that it felt somewhat unnecessary. The fantasy 4X genre is nothing if not crowded these days, and despite Age of Wonders lifting as much influence from Heroes of Might and Magic as it does from Civilization, it still didn’t offer much reason to persist through its cumbersome systems and slog of a story setup.

But science fiction 4X? That genre’s considerably more open, especially when it comes to land-based science fiction. In recent years, that category consists of Civilization: Beyond Earth and…not much else.

Enter Age of Wonders: Planetfall, which Triumph unveiled at PDXCon 2018 this past weekend. Space mechs? Insectoid aliens? The last, defiant remnants of a crumbling empire? Planetfall has hooks in me at least.

Our time with Planetfall at PDXCon was both hands-off and brief, but probably the highlight of the event. As I said, the game is set among the ruins of a space-faring empire, the Star Union (a.k.a. Space Rome). As the galaxy finally stabilizes again, people start to explore the remnants of the empire and rediscover their heritage. You’re one of these explorers, charged with resettling these lost planets and uncovering the treasures they hold.

It sounds like the setup for your standard space-based 4X game, the sort of interstellar conflict seen in Endless Space or, on the grand strategy side, Stellaris. Ones where war is waged mostly in space, I mean.

It’s a bit of trickery though on Triumph’s part, a grandiose backdrop to set your struggle against. Campaigns actually play out on a single map, “boots on the ground” as Call of Duty might say, with the now-standard hexagonal landscape stretched out around you. Maps are procedurally generated, and you’re able to see what kind of planet you’re landing on before committing to, say, a desert planet. You are committing though—once you’ve landed, that’s basically the seed for your game, same as any Civilization match or what have you. It’s just shrouded in this galaxy-spanning conflict for context.

Events on the ground are your standard 4X affair. We didn’t see more than a few turns which makes it hard to judge how the game will progress over time. It looked like the usual blend of army-building and exploration though, scouting new regions and fighting the enemies therein.

The most interesting aspect is the unique buildings. In our demo it was a Xeno Life Institute, a relic from the old empire that would grant our faction the potential for genetic engineering if we captured it. That sort of power doesn’t come cheap though, and indeed the Xeno Life Institute was demoed to us as a late-game goal for the player, guarded by dangerous high-level enemies. It’s something you might stumble upon early but lack the military might to acquire.

These sorts of ruins dot the map though, some more dangerous than others. Another building we saw was the crumbling remainder of what Triumph called “Space Vegas,” the Crimson Euphoria Hotel and Spa, plopped down in the middle of a now-barren desert.

Building a story around a 4X game is hard. A lot of times, 4X games go too light on the worldbuilding, i.e. Civilization: Beyond Earth and its reskinned Civilization V feel. On the other end is Triumph’s own Age of Wonders III, which bogged down under huge chunks of lore text.

Planetfall seems like a more natural balance, and that has me excited. Squint, and you can almost see the empire as it was before the collapse, all towering skyscrapers and glistening titanium. And it manages this (at least in our demo) by showing the player, not relying on unwieldy amounts of text.

It helps that you can see that world up close, too. Planetfall retains the Age of Wonders combat, where units that meet on the strategic map are then transported to a zoomed-in tactical map to figure out who wins. A turn-based game inside a turn-based game, if you will.

I’m not going to go too in-depth on these systems. We saw one brief battle, between a bunch of robots and a bunch of oversized insects, but it’d be silly to give you a blow-by-blow. I’ll say this: Planetfall seems to be a fan of XCOM. Taking cover behind cars and concrete barricades, putting units into overwatch—it’s very familiar.

It looks great though, both the tactical side and the actual artwork. The latter lends a ton of character to Planetfall’s world, even more than the overworld itself, with our demo skirmish taking place on what looked like a highway interchange, full of abandoned cars and sagging street signs. It hammers home the “long lost empire” aspect of Planetfall. There’s a sense of place, an atmosphere to these battles that goes beyond what 4X games usually accomplish.

There’s still plenty left to learn about Age of Wonders: Planetfall. Does the AI still cheat like a back-alley sailor? Will the in-game economy be a total mess to manage? Will the campaign be any good? These are all problems Age of Wonders III struggled with, and our hands-off demo didn’t provide any answers.

First impressions matter though, and Planetfall makes a great one. It’s colorful, it’s unique, and its setting already sounds worlds (no pun intended) more interesting than its predecessor. Look for a release sometime in 2019.