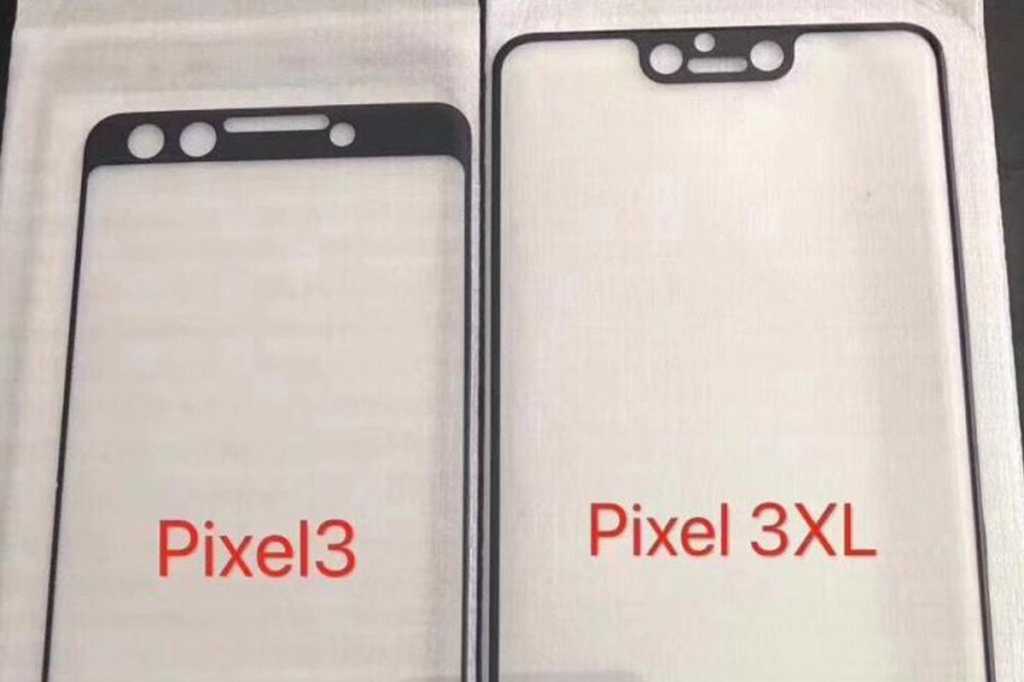 Update 3:10 p.m.: A render based on the leaked screen protector shows what the Pixel 3 could look like in the flesh.

With the launch of the Pixel 3 less than six months away, Google has likely shored up the phone’s final design, and is putting on the finishing touches before it heads off to manufacturing. And right on cue, we have our first leak of the front screen protector of the next-generation Pixel, and, well, it looks pretty much exactly as I expected.

There’s a big honking notch at the top of the XL version. The bezels on the smaller model have been reduced, but they’re still pretty big. Both sizes have hefty chins below the screen with enough space for a speaker. Basically, they’re functional 2018 smartphone panels—no more, no less. Google’s first two Pixels didn’t win any design awards, so it would be surprising if the Pixel 3 suddenly had a sublime level of design like the Samsung Galaxy S9.

Graphic artist Jonas Daehnert took to Twitter to offer up his take on what the Pixel 3 could look like based on the latest rumors, and I’ll admit his concept isn’t bad. But even this best-case-scenario Pixel 3 is still imbalanced with too much notch and an off-center speaker. On top of that, LG has confirmed that it will once again be supplying the panels for the 2018 Pixel phones, so pardon me if I’m not totally jazzed about the front of the Pixel 3.

So no, the screen cutout isn’t what caught my eye about the latest Pixel 3 leak. Rather, the cutouts inside the notch and the bezels piqued my interest. As usual with these types of screen-protector leaks, we see holes for the camera and the sensors, but it appears as though Google has made room for a second front camera on the Pixel 3. This would all but ensure that there’s a dual camera set-up on the rear of the device as well. Compare it to the Pixel 2’s screen protector, and there’s definitely an extra camera-sized sensor on the front.

A second front camera would be a cool addition to the new Pixel phone for sure, but more importantly, it likely means the rear camera is going dual as well. Even with a single lens, the Pixel 2 has one of the best cameras you can get in a smartphone, thanks to Google’s impeccable image processing. But a dual camera would seriously up the ante, and put the Pixel 3 in the running to beat the Huawei P20 Pro’s DxOMark score of 109.

The best reason to believe this latest leak is legit has nothing to do with the Pixel at all. Instead, we should turn our eyes to the HTC U12+.

In case you don’t remember, Google bought the bulk of HTC’s smartphone division last year, and, consequently, one of the best features of the HTC U11, the squeezable Edge Sense sides, made it over to the Pixel 2. But what most people didn’t notice is that the Pixel 2 and U11 had nearly identical camera specs as well:

It now stands to reason that the Pixel 3 will take some cues from the U12+, which brought dual lens to both the front and the back of its flagship phone this year. The main camera on the U12+ has a killer dual array, combining a 12MP f/1.8, 1.4µm lens with a 16 MP f/2.6, 1.0µm secondary one. There’s also OIS in both lenses and 2X optical zoom.

But the U12+’s front camera might be even more impressive. With dual 8MP (f/2.0, 1.12µm) lenses, HTC provides real-deal selfie portraits, and you can even adjust the focal point after the fact. I’m still testing the camera for my review, but if its DxOmark score of 103 is any indication, it’s going to be tough to beat.

All about the camera

Now that we’ve seen the best Android has to offer for the first half of 2018, all eyes turn to the biggest releases of the fall, namely the Samsung Galaxy Note 9 and the Pixel 3. While it’s starting to look like the Note 9 will be an iterative release, the Pixel 3 has a chance to make some serious headway against the rest of the premium Android handsets.

And if Google is going to make more headway this year, it’s probably not going to be because of its physical design, notch or no notch. It’s going to be the OS and the camera that tempt users to switch from Samsung and Apple. We’ve already seen how radically different Android P is, with gesture navigation and killer notifications, and with this latest leak, we might have some idea of how great the camera is going to be as well.

So don’t worry about the notch. It’s what’s inside it that’s going to matter.