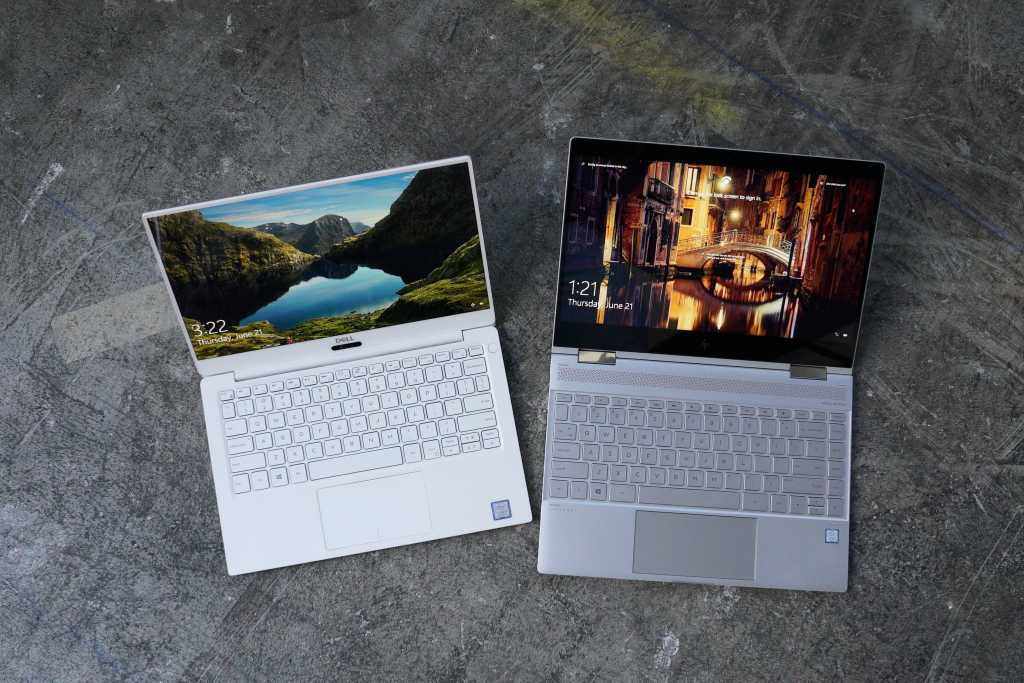 When you’re trying to decide on a great laptop, Apple’s MacBook can take a backseat. For the PC faithful, the only grudge match that matters is the one between Dell and HP. Specifically, the companies’ flagships, the New XPS 13 ($1,199 from Dell) and the Spectre x360 13t (officially $1,250 from HP, on sale as configured for $990 as of this writing) are constantly competing to be top dog in the laptop universe.

With completely refreshed models at hand, we’re putting these two dream machines through an old-fashioned smackdown. We’re comparing them on everything from design and features to price and performance, declaring a winner in each category. Keep reading to see who comes out ahead.

This category really comes down to how versatile a laptop is in different scenarios, and considers whether a laptop can be used in an “A-frame” or tent mode, or as a tablet. And yes, it’s really a proxy war for 360-degree-convertible (HP Spectre x360 13t) vs. clamshell (Dell New XPS 13) design. 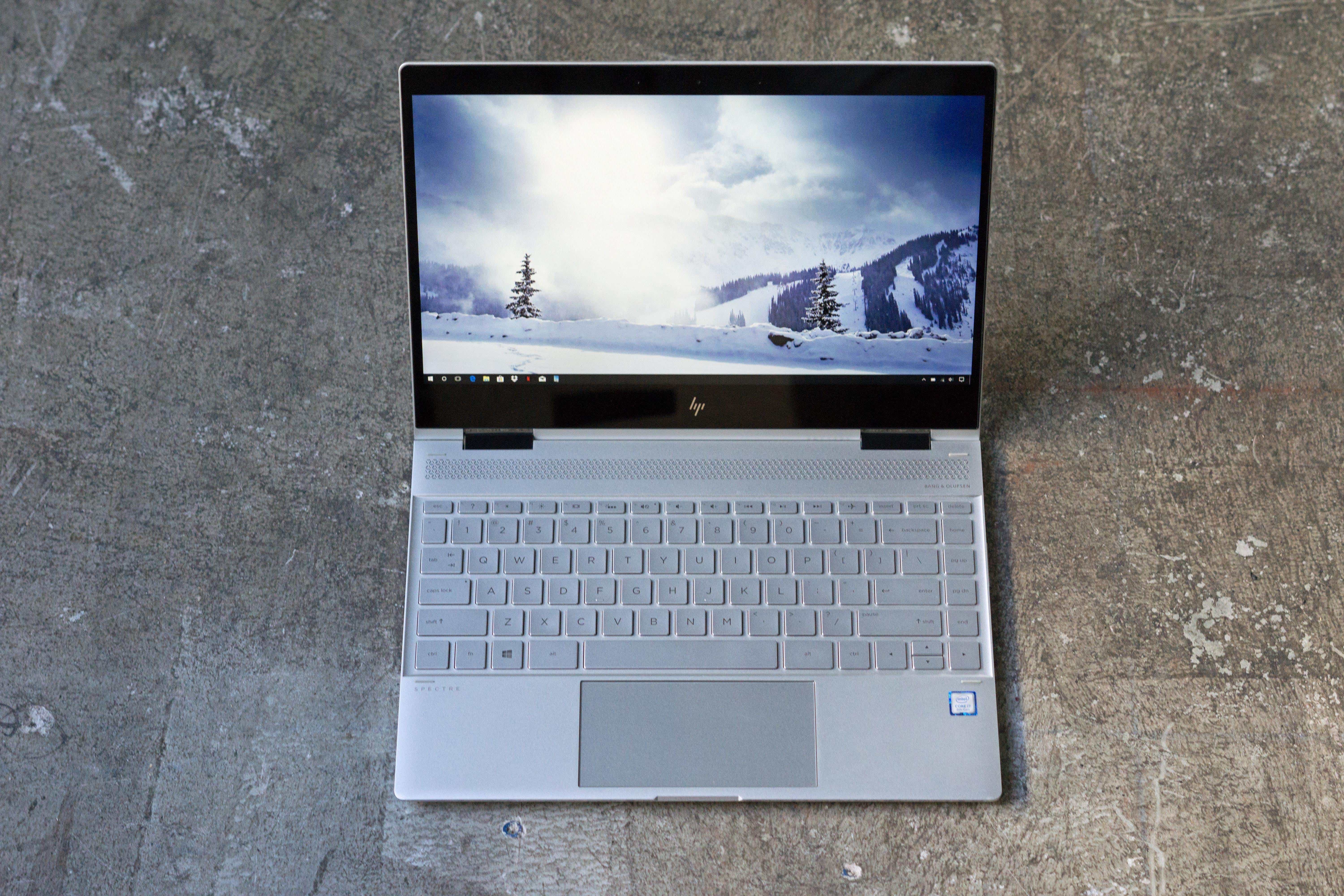 The one caveat to all this is performance. We’ll dive deeper later in this story, but for now let’s just say that in general, clamshell laptops outperform similarly outfitted convertibles. For most users, though, having touch, pen, tablet, and tent-mode capabilities outweigh performance.

It’s almost like clamshell laptops are sedans and 360 laptops are “crossover” SUVs. And yes, Ford did just discontinue making all sedans, so we know where this is going.

Let’s be clear: Both laptops are extremely portable for what they offer in capability and performance. In pure weight contests, our scale put the New XPS 13 at 2 pounds, 10.5 ounces, and the Spectre x360 13t at 2 pounds, 11.7 ounces. Unless you’re looking for a true featherweight-class devices that’s closer to two pounds, it’s going to be hard to beat these two.

Where it might matter to someis how large the actual body is, which can affect the size of your laptop bag or your comfort on a cramped airplane. While we think this is a pretty close battle, the nod obviously goes to the New XPS 13, which is just incredibly small despite having a 13.3-inch screen. 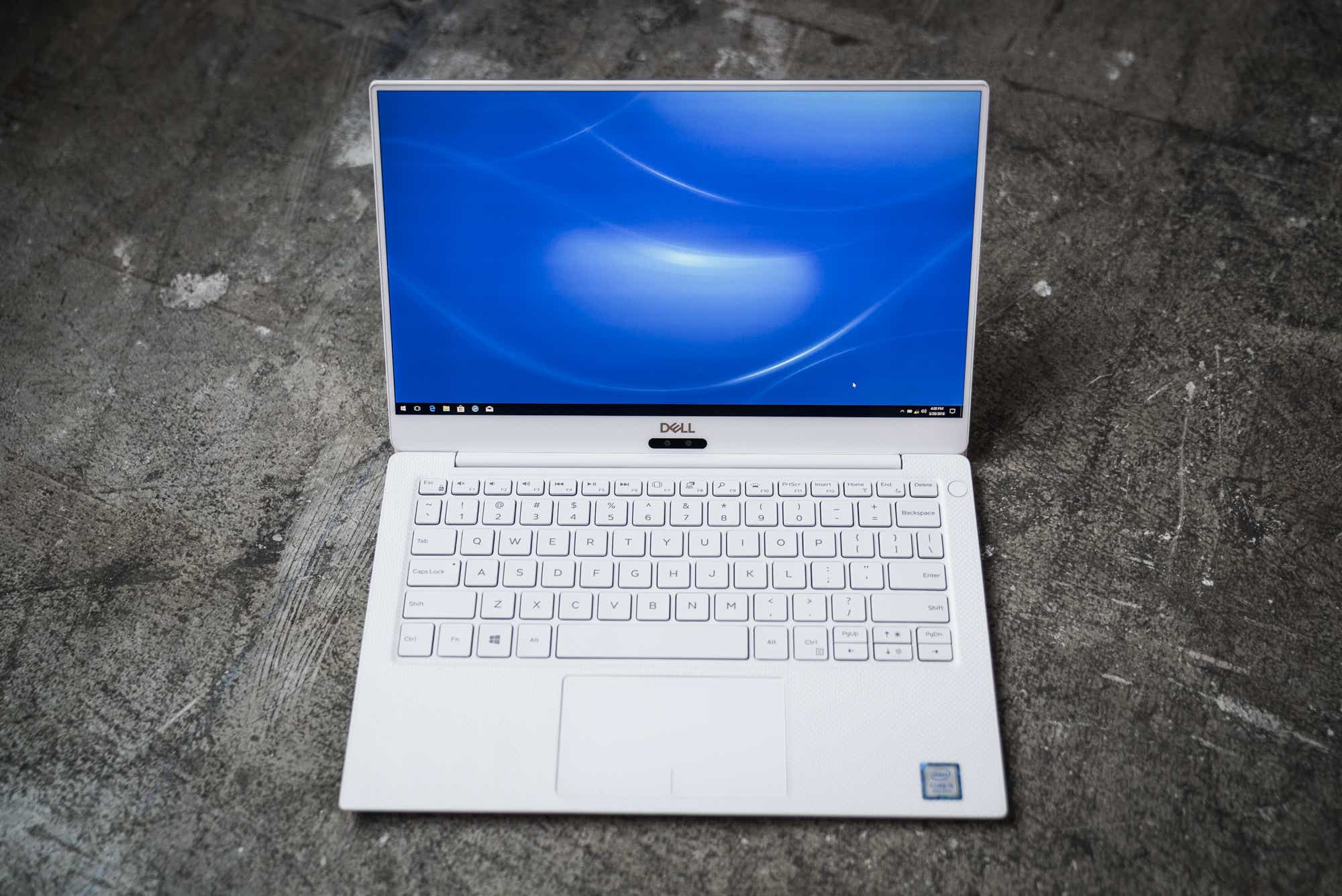 Although we’re talking fractions of inches in width and depth, the New XPS 13 just feels tiny when you carry it around closed, thanks to its toothpick-thin bezels.

Of course, HP would counter that its somewhat broader bezels allows the webcam to be on top of the Spectre x360 13t’s display, which is where it ought to be to show your best side during a videoconference. This is a justifiable dig at the New XPS 13’s low-slung webcam, which loves to stare up your nostrils. But this detailmatters less when you’re just trying to survive a cross-country coach flight.

Thinner laptops struggle to fit all the ports users might want. These flagships have their compromises.

The HP Spectre x360 13t has a single USB 3.1 Gen 1 Type A (5Gbps) port on the left side, along with a combo headset jack and microSD port. On the right, you get two Thunderbolt 3/USB-C ports, which also charge from USB-C Power Delivery.

The Dell is the more controversial one. On the right you get a single USB-C port (with charging support) and MicroSD, and on the left, you get a Noble lock port and two Thunderbolt 3/USB-C ports with charging. Yup, no USB Type A. Dell says the port’s size was simply too big and would have made the laptop larger, so it includes a USB-C to USB-A adapter.

We appreciate that Dell included the a dongle, which is what any responsible computer company should do. But we also know from direct experience that dongles get lost all the time, So yeah, this one is easy to pick. Winner: HP and Type A ports.

And if you want HDMI, ethernet, or other perks, you’ll be looking for thicker laptops than these.

It’s interesting that both the XPS 13 and Spectre x360 13t are the last refuge of “good keyboards.” There’s no marketing to make you believe that less key travel is better. For most of us (not all), less keyboard travel is like less space on a coach flight. No fun.

Both units use piano-hinge style trackpads made by Synaptics. We prefer the New XPS 13’s, because the wider aspect ratio of the HP Spectre x360 13t’s forces us to crank up palm rejection.

In the end, it’s always about personal preference, so this is pretty much a tie.

Keep reading to see how performance shakes out.

On its face, a performance showdown with the Dell New XPS 13 and its 8th-gen Core i5-8250U, versus the HP Spectre x360 13t with its 8th gen Core i7-8550U, would appear to be unfair, because Core i5 > Core i7. Because the HP is a convertible laptop, however, it’s fighting an inherent thermal disadvantage: It needs to be comfortable when used as a tablet, so its exhaust vents are limited in their breadth and design. Dell has also made much hay of the enhanced cooling in the New XPS 13.

That design difference is the fundamental reason the Core i5 in the New XPS 13 ekes out more performance than the Spectre x360 13t’s Core i7. But don’t just believe us: Check the results from the popular CPU-only Cinebench R15 benchmark when testing all of the available cores in a CPU.

Because few applications use all of the cores available, it may actually be more important to look at how the laptops perform in single-threaded tasks. When we set Cinebench R15 to run using a single CPU core, the result actually does make this the unfair contest you were expecting between the Dell’s Core i5 and the HP’s Core i7. The Core i7, we’ve long established, mostly offers performance in short bursts.

Still, we can offer this forecast: If you paid for the Core i7 in the New XPS 13, it would likely be even slightly faster than the HP Spectre x360 13t in both modes. In the end, we’re giving this contest to the Dell.

Battery life is probably more important than pure CPU performance for most users. For our test, we set the laptops to airplane mode and loop a 4K video at a relatively bright 250 to 260 nits until the battery dies.

We see a three-way tie, more or less, between the new Dell XPS 13, the older Dell XPS 13, and the HP Spectre x360 13t. The New XPS 13 does relatively well considering that its battery is smaller. The HP also rallies despite its power-hungrier touchscreen and active pen support. In the end it’s a tie.

Anyone who’s followed Dell and HP pricing can tell you the pattern. Spec for spec, HP tends to offer more value than Dell. Even in this battle of flagships, where prospective buyers aren’t necessarily pinching pennies, HP remains in the lead.

Few people ever upgrade laptops, but it’s still good to know your options. Of course, “upgrade” isn’t what you can do on a large and thick laptop. About the only thing you can swap out on slimmer models these days is the storage, as the RAM and even Wi-Fi modules are soldered to the motherboard. Don’t worry: Unlike Apple, both HP and Dell use industry standard M.2 SSDs. Both are compatible with NVMe (which they come with) or SATA-interface M.2 drives. For the most part, this is really how difficult it is to get inside.

To get into the HP, you need a precision Torx screw driver. The job is made easier with a small suction cup that lets you pull the lid up. One negative on the HP: While the front and side screws are exposed, the rear screws are hidden under the rubber feet. That means you’ll have to remove the feet and glue them back down after you’ve swapped out the drive.

The Dell, on the other hand, exposes all of the screws. The Dell’s M.2 drive is under an aluminum heat spreader. We will add that the New XPS 13’s bottom is slightly more tricky to remove so we recommend you review any service manual before cracking it open.

In the end, we’ll declare this a tie. Both are openable, but with challenges. Both also offer but one upgrade: the SSD.

We all know with a PC, it’s what’s inside that matters. But when the insides aren’t that different, focus shifts to appearance.

The New XPS 13’s new look is a serious head-turner, from the white keyboard deck to the rose gold, brushed aluminum bottom and top. Which is sexier? Unfortunately we can’t say, as this boils down to personal preference.

We swear this isn’t a cop-out. The numbers don’t lie. When we totaled up the score we ended up with a dead-even, 50-50 result.

In the real world, however, we know you still have to choose. With laptops this great, the deciding factors will be the kinds of details we laid out above, from webcam position to port selection to chiseled corners vs. rose gold panels. This is a good problem to have.