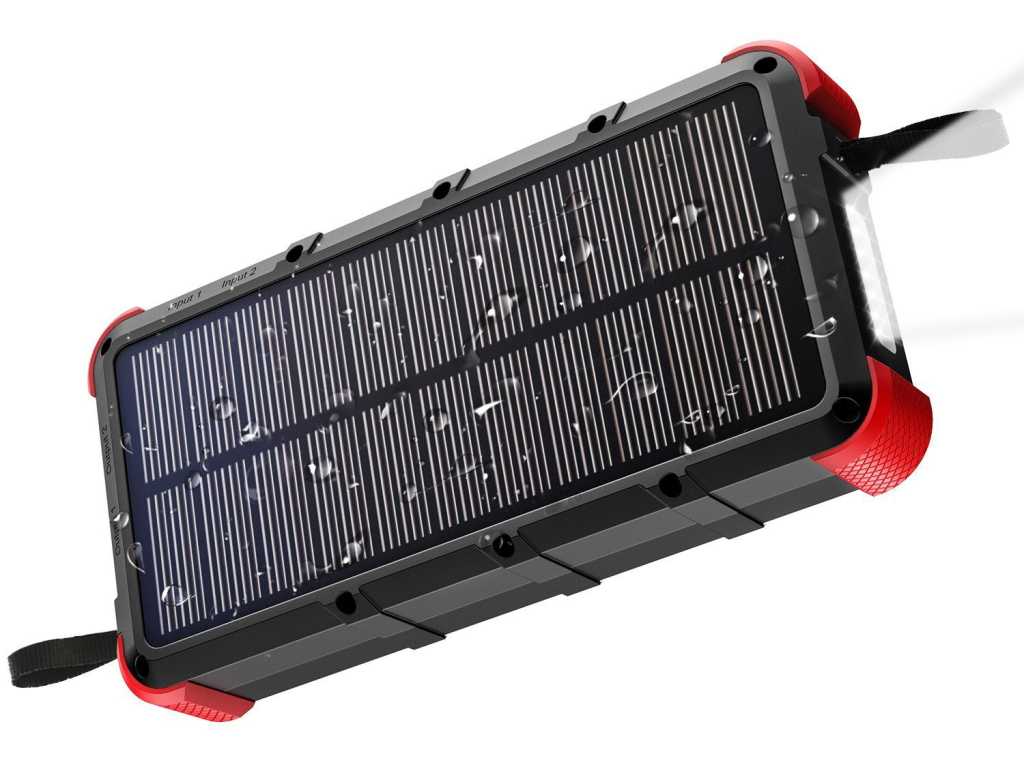 Outxe
At a Glance

The Outxe Savage is built to withstand a lot of abuse, and it comes with solar charging, but it’s heavy, and the solar feature is necessarily dog-slow.

The Outxe Savage 20,000 mAh battery pack looks more like an Otterbox case in that it’s designed to withstand a few floor drops—and maybe even a quick dip in a stream or pool thanks to its IP67 rating. The tough exterior is covered in plastic, with a bumper system protecting the corners and perimeter of the battery pack.

On top, you’ll find a power button and six indicator lights, each one representing different charge levels for the pack. To the left of the power button sit two input ports, one USB-C and one microUSB. Either port can be used on its own to charge the pack, or you can use the ports simultaneously to increase charging speed.

In our test, we charged the pack using only the USB-C port and it took 9 hours and 40 minutes to completely charge. However, when we used both ports, we were able to cut nearly three hours off that time, for a total of 6 hours and 50 minutes to fully recharge the pack.

The pack includes a small carrying strap for connecting longer carrying straps or one of the two included carabiners. Two USB-A ports are also on the front. One port is green, the other standard black. The green port—or Output 1 as it’s labeled—is Quick Charge 3.0 compatible with 5V3A, 9V/2A, and 12V/1.5A power output. Output 2 is a standard port, providing 5V/2.4amps.

With a total of 20,000 milliamp-hours (74Wh) of power, our testing resulted in an efficiency of 91.05 percent, putting the Outxe Savage third overall out of all the packs we’ve tested.

Another feature that differentiates the Savage from other packs we’ve tested is the solar panel on the bottom of the pack. The panel is used to charge the pack’s internal power reserve, but don’t count on it to get the job done in a short amount of time. According to Outxe, the solar panel charges the pack at a maximum of 2W, depending on ambient light brightness. At that rate, it takes a whopping 70 hours of continuous light to charge the pack from empty to full. But, hey, that’s solar charging for you.

The upshot: If you’re buying this pack in anticipation of never having to plug it in to charge, think again. The solar portion of the pack is handy if you’re often outdoors and have time to just let it sit in the sun to slowly rebuild power, but other than that, you’re going to need more conventional charging access.

Bottom Line: The Outxe Savage 20,000mAh battery pack is rugged and efficient, making it an ideal pack for outdoor enthusiasts. The solar option is nice to have in an emergency, and the durability of this pack is welcome, but it does add bulk and weight.