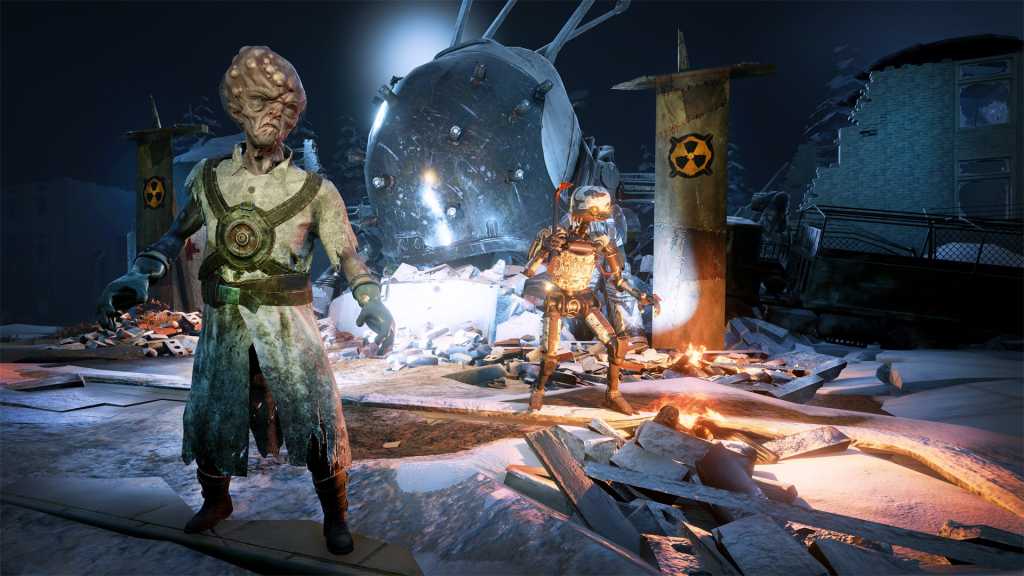 A duck, a pig, and a zombie(?) walk into the burned out ruins of a bar, and all hell breaks loose. At least, I think it was a bar. To be honest, it was more ruins than anything else, and that was before one of the 15-odd enemies threw a Molotov through the window and lit everything on fire.

I went hands-on with Mutant Year Zero: Road to Eden at E3 last week, and it was a real treat—like playing XCOM’s quirky cousin. So engaging, I didn’t even mind I got my ass kicked.

Four times I got my ass kicked and started over, I should mention. And I wasn’t alone. I just barely squeezed Mutant Year Zero into E3—it was actually the last appointment on the last day—and still we were told that only three people had managed to beat the demo the entire week. Some difficulty tuning is in order, maybe.

There’s a lot to wrap your head around though, and that made it just as difficult to pick up and play. On the surface, Mutant Year Zero is very much XCOM. I don’t feel bad saying it, because Funcom doesn’t feel bad saying it. The obvious influence was mentioned multiple times during our session, and even the controls are laid out the same. If you’ve played Enemy Within or any of the XCOMs that came after, you will feel very at home here.

But Mutant Year Zero’s take on turn-based tactics does have a unique twist: It’s not always turn-based. No, really. Combat is turn-based, but combat is also avoidable. Our level actually began in real-time mode, which plays almost like an isometric RPG. You wander around collecting items and listening to your party chatter away, maybe admire the post-apocalypse a bit.

When an enemy appears on-screen, it’s usually wise to enter stealth. Your party crouches, turning off its flashlights and showing you the enemy’s vision cone. And here’s where it gets really interesting: You can sneak up on an enemy, then tap the space bar to “Ambush” them.

This drops you into turn-based combat, and alerts the enemy. You get first shot though, and can actually use silenced weapons to take down an enemy before it calls for backup. Doing so is vital. In my hands-on time, I had three enemies I could reliably take out without alerting the entire base. Alone, wandering through the trees, it was easy to sneak up behind and pop them with a few pistol shots, then return to real-time mode.

It’s a cool idea. Real-time works a lot better for exploration, which always feels clunky in XCOM as you give each unit “Run Forward” orders. And then the fact that you can take advantage of enemy patrols and pick off units one at a time? Slick.

My only complaint at the moment is that dropping into turn-based combat is currently a one-way street, even if an enemy hasn’t seen you. We were told that might change before release—it’s annoying to “Ambush” an enemy only to realize you’re out of position, and have no way to fix the situation without alerting them. But I also felt like I’d get a better feel for when to ambush enemies if I just played more, so maybe it’s fine if you’re starting from scratch.

The other feature that seems interesting: The world itself. I haven’t played the tabletop version of Mutant Year Zero, but I’ve checked out Free League’s other game Tales from the Loop and it’s absolutely phenomenal. That’s actually what got me to take the E3 meeting.

If Mutant Year Zero: Road to Eden is a faithful adaptation of the tabletop universe, then I’m definitely intrigued. As I said up top, our three-member party was a pig, a duck, and some sort of zombie-looking lady. Bormin, Dux, and Selma, respectively.

It’s captivating. XCOM has a great sense of style too, but always feels very stressful. The aliens are coming. Stop them before it’s too late! You’re meant to panic.

But in Mutant Year Zero, I felt like I was supposed to laugh. Panic in combat, sure, but as grim as Mutant Year Zero’s post-apocalypse portends to be, there’s a lot of humor here too. Watching a zombie get sniped by a pistol-wielding duck is inherently hilarious to me, as is a pig wearing biker gang clothes and wielding a shotgun.

Our demo didn’t show off a ton of story, but I imagine it’s also easier for Mutant Year Zero to tell one. As I said, the real-time segments play out a bit like an isometric RPG. That’s not to say there are extensive dialogue trees to sit through or anything (at least not that we saw), but it does open up levels for exploration a bit more, and thus lends itself to environmental storytelling. We were given a sneak peek of another mission for instance, one that took place in an abandoned tunnel. It was a smaller level, with very little combat. Just basically a quick detour for the party.

That just doesn’t happen in XCOM. There, missions are for combat. You’re either fighting, or you’re back at your base. Mutant Year Zero, from what I could tell, seems more like a straightforward progression from level to level (i.e. down the titular Road to Eden maybe) with plenty of chances to catch your breath in between the fighting. An interesting structure for sure, and I’m curious to see how it plays out.

The name is a detriment, I think. If I weren’t familiar with Free League, I might’ve glossed over Mutant Year Zero: Road to Eden entirely. It’s both too wordy and too generic.

And thus Mutant Year Zero became one of my biggest surprises of E3. I took the meeting last minute and I’m glad I did, because this is probably the best XCOM-like I’ve played thus far. It’s unique, it’s clever, and I can’t wait to dig into the whole real-time aspect. Ambushes are thrilling when you pull them off correctly. I also can’t wait to play it on a difficulty where I can make it through an entire level, at least once. Yeah, looking forward to that a lot.

Mutant Year Zero: Road to Eden is due out later in 2018. And be sure to check out the tabletop version too. I’ve heard it’s pretty damn great.