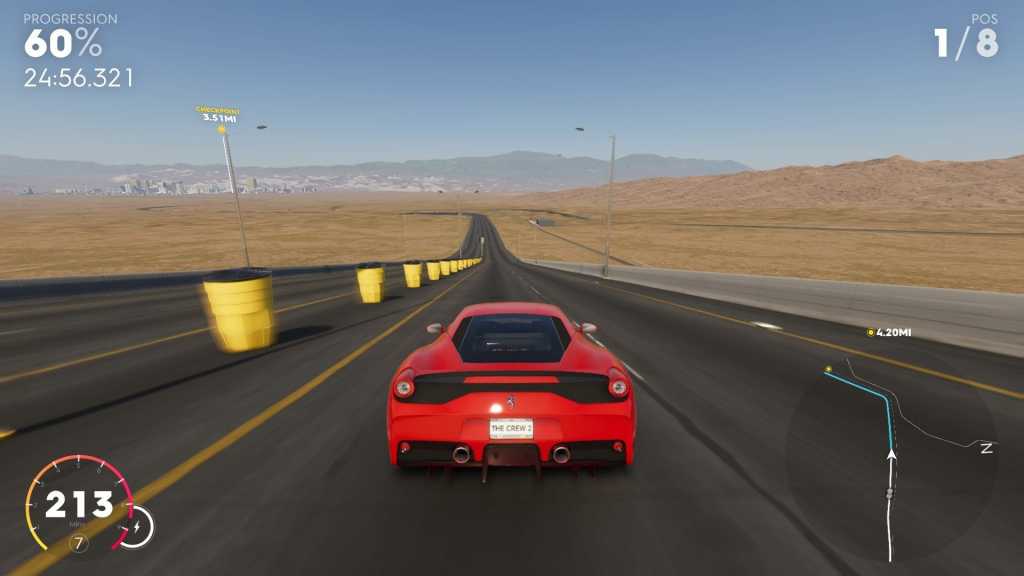 The Crew 2 hits almost the exact same highs and lows as its predecessor, a compelling fantasy of American car culture that’s less fun as soon as you start actually racing.

I’m having flashbacks. A little over two years ago now I wrote a review for The Crew, Ubisoft’s racing-game-slash-MMO hybrid, a game that touted all of America as its map. And it made good on that promise—I spent a long time just admiring the scenery contained therein.

That’s about all I admired though, because it was a pretty damn mediocre racing game.

And here we are again, with The Crew 2. Another game with an identity crisis, of sorts. Another game where the map is the biggest draw—and it’s a fantastic draw, let me say that up front. I just wish literally anything else about it were interesting.

Drawing lines on the map

No game captures America the way The Crew 2 does. Or at least, no other game captures this very specific, vehicle-centric America.

I’m not sure it’s an unfair lens through which to view the United States. This country is enormous. So large it beggars belief. Each day, millions of people drive to work, fly cross-country, take the ferry across its various bodies of water. Transportation is in our lifeblood, black ribbons of tar crisscrossing the continent in unbroken paths that lead from the end of your driveway to Hollywood, to Manhattan, to Kansas City and Cleveland.

The Crew 2, like its predecessor, embodies this fantasy. It is a game about car culture. Real car culture, not the flashy street racing of a Fast and the Furious or a Need for Speed. I mean the type of all-American car culture that has people road-tripping in the old family station wagon.

It’s not a sexy fantasy, but it’s a compelling one. And as such, The Crew 2 is at its best when it’s just you casually taking it all in, like the protagonist of Simon and Garfunkel’s “America” song. It’s the Las Vegas light pollution spreading across the Mojave Desert, or how highways weave in and out of the Rockies and the Sierras, or those vast arcing bridges connecting the Florida Keys to the mainland.

I’ve been on a lot of road trips—as a kid, sitting in the backseat while my parents drove us from East Coast to West, and later as an adult driving from San Francisco to Seattle, or to Los Angeles, or even just to Lake Tahoe. I enjoy it.

And so The Crew 2 is like catnip. Its America is condensed, and missing a lot of the interstitial strip malls and gas stations and all the other connective tissue that’s vital to the classic road trip. The fantasy remains intact, though. The Crew 2 understands America on a level few games can claim. Its recreation is sterilized, limited—after all, you are a car among cars. The plight of simple pedestrians is of no import to you, a driver. But it’s pleasant. Put on an album in Spotify, point the car in a direction, and go.

Driving is improved, too. The Crew‘s cars were all uniformly terrible, with arcade steering that nevertheless felt too loose and imprecise to consistently nail turns. The loot system didn’t help, as you slaved mercilessly to unlock better exhausts and tires for your car to get it in some semblance of working order.

The Crew 2 is slightly better in this regard. The loot system seems almost inconsequential here, to the point where I wonder why it’s even included. Cars handle tighter, though. While The Crew 2‘s still not on a par with Forza Horizon or even Need for Speed, it at least feels like it’s approaching a real racing game.

The rubberbanding is as egregious as ever though, and that really sinks The Crew 2 whenever it asks you to, you know, actually do any of the hundred activities it has planned. To recap: “Rubberbanding” is the term used in racing games that governs how AI performs. It’s typically bad for the AI to get either too far ahead or behind the player. Too far ahead and it feels like the AI is cheating. Too far behind, and the player isn’t challenged.

But The Crew had a problem. No matter what you did, aggressive rubberbanding kept the AI within a certain range at all times. Even if you fell way far behind, it always seemed possible to catch up—and vice versa. You could lead a race for 30 minutes straight, then take one turn poorly and watch your opponents zoom past.

The situation here? Exactly the same. I get it—there are some 40+ minute races in The Crew 2, and you don’t want the player to pull out ahead in the first ten minutes and coast to the end. It’s so obvious, though, and so artificial feeling. It undercuts the tension in a race just as badly as having a clear shot to first place.

So racing cars is mediocre.

And then we come to the part where Ubisoft just threw a million ideas in a blender and hoped one of them would impress people. Prior to release Ubisoft showed off two other classes of vehicles: Boats and planes. When you’re not in an event, this trifecta is pretty cool. You can swap vehicles seamlessly on the fly, driving through Manhattan for instance and then turning your Dodge Charger into a P-51 Mustang and flying off into the sunset. On a technical level, it’s amazing.

Neither boats nor planes actually control that great, though. Boats are just bad cars, and planes are only fun when they’re flying close to the ground. Any higher than 100 feet, and there’s zero sense of speed. You can only do so many barrel rolls to liven up a trip. Needless to say, racing isn’t very interesting either.

Then it gets even weirder. There are motocross bikes, motorcycles, monster trucks, and more. It’s a real shotgun approach to transportation, and most of it thoroughly mediocre. Monster trucks are the only ones I’ve enjoyed, flinging them off half-pipes and driving up to the top of the Luxor Pyramid in Vegas, and so on. It’s silly fun. Motocross bikes are the worst of the lot, controlling like a sack of garbage attached to a downed power line.

Regardless, it dilutes The Crew 2. There are so many vehicle classes, each relegated to only a handful of events. Love street racing? Well, here are your dozen-or-so street races, and then it’s time to find something else to do. Monster trucks? Here, a handful. Then move on.

At some point you’re going to run out of stuff you enjoy doing, and that’s when you’ll realize The Crew 2 is better when you’re doing nothing at all. Or at least that’s how it went with me. I stopped wanting to do any of its soulless tasks and just focused on its America, and suddenly I was a hundred times happier.

“Doing nothing” also allows you to avoid the vast majority of The Crew 2‘s writing, and trust me: That’s a good thing. The script is terrible, and the voice acting sounds thoroughly phoned-in. It’s bad. And listen, racing games don’t have to have great stories. I’m not looking for The Godfather here. The Crew 2 feels like it lifts all of Forza Horizon‘s hip lingo though without knowing why any of it works, and the result is cringe-worthy.

Hell, you don’t even have to get into the game proper. When you start, you choose a character from a pre-made bunch, each with their own “badass” slogan to help differentiate them. Here’s one: “I feel the need. But for a lot more than speed.”

That should give you an idea of what we’re dealing with here.

America, though. What’s frustrating is that The Crew 2 feels like it hits the same exact highs and lows as its predecessor. The map is so, so incredible. I really can’t overstate it. On both a technical and an artistic level, it is just a phenomenal achievement. I’ve kept playing The Crew 2 for hours longer than I expected, mindlessly crossing and recrossing the USA from New York to California and from Seattle to the Florida Keys. It’s a beautiful country, with beautiful landmarks both natural and man-made.

Then it ropes you into a race, and the whole illusion falls apart. That’s not great, when racing is the central theme. And worse when this is your second attempt at the same ideas.

Maybe The Crew 3, eh? One of these days Ubisoft will execute on this vision, or at least I can hope. It’s an incredible dream, but one that still needs a lot of work on the fundamentals.