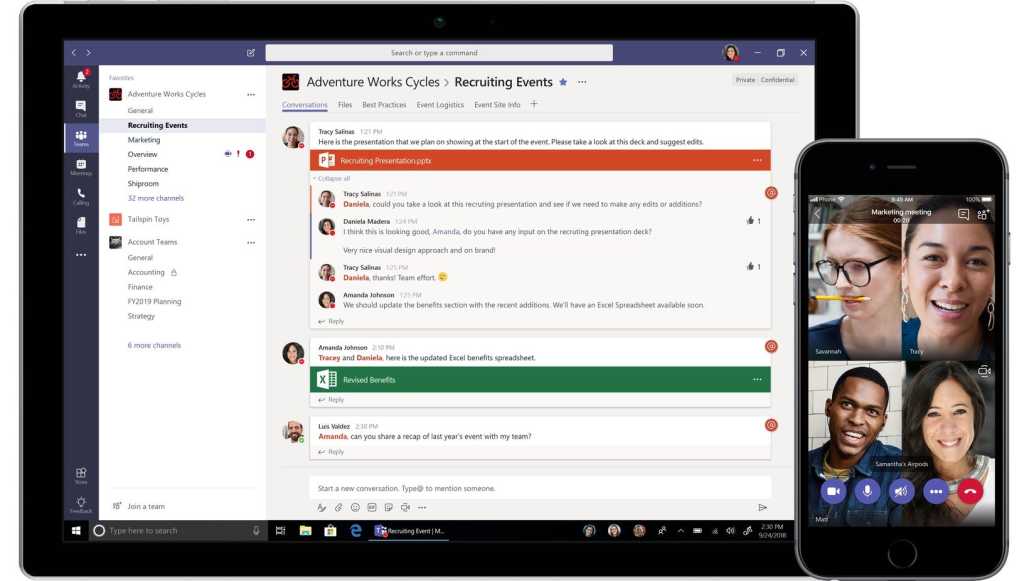 On Thursday, Microsoft began offering a free version of Microsoft Teams as an incentive to switch over from Slack—and is loading it up with key features such as unlimited chat messages.

Earlier this week, Slack said it was improving its own in-app search, with automated suggestions. Slack’s free version still limits users to 10,000 searchable messages, though—and Teams does not. That’s one of the key selling points of the new free Teams service; the other is the number of users—300—which will be enough for many small businesses.

“For us, it was all about continually breaking down barriers to [Teams],” said Lori Wright, General Manager of Microsoft 365 Teamwork, in an interview. “We don’t necessarily think you should be an Office 365 subscriber to experience the power of the Teams solution.”

That said, Microsoft is, in fact, reserving key features for the paid version of Teams, which is built into Office 365. Video chats that are conducted within Teams—which is replacing the standalone Skype for Business application—can be stored in the cloud, and is searchable, and features automatic captioning as well. In the future, Microsoft said, it will include facial recognition, so that viewers can search for what was said, as well as who said it. A public preview of “live events,” video broadcasts that can be transcribed, archived, and timecoded, will debut this summer.

For now, though, here’s what will be in the free version of Teams, according to Microsoft:

Microsoft sees Slack as a top competitor, and is trying to establish Teams as a one-stop repository for any document that a team collectively needs to work on. Over 140 business apps work with Teams, Microsoft said, and the 2GB/user file limit should allow plenty of storage per user. (Paid Teams members get up to a terabyte of storage, of course, as part of Office 365.)

Two additional features will be added to the free Teams version later this year, including background blurring, an invaluable tool for remote users. As the name suggests, Teams will intelligently blur your screen’s background—so if you’re conducting a video chat from your kitchen table, your dirty dishes won’t be visible in the background. Inline message translation in 36 languages is also due before the end of the year, Microsoft said. (The free version of Teams is available in 40 languages already.)

Microsoft’s ‘nudges’ will serve as your work coach

Microsoft hasn’t said whether these “nudges,” as the company calls them, will migrate to the paid version of Outlook. If they do, expect to see a few raised eyebrows among the general public.