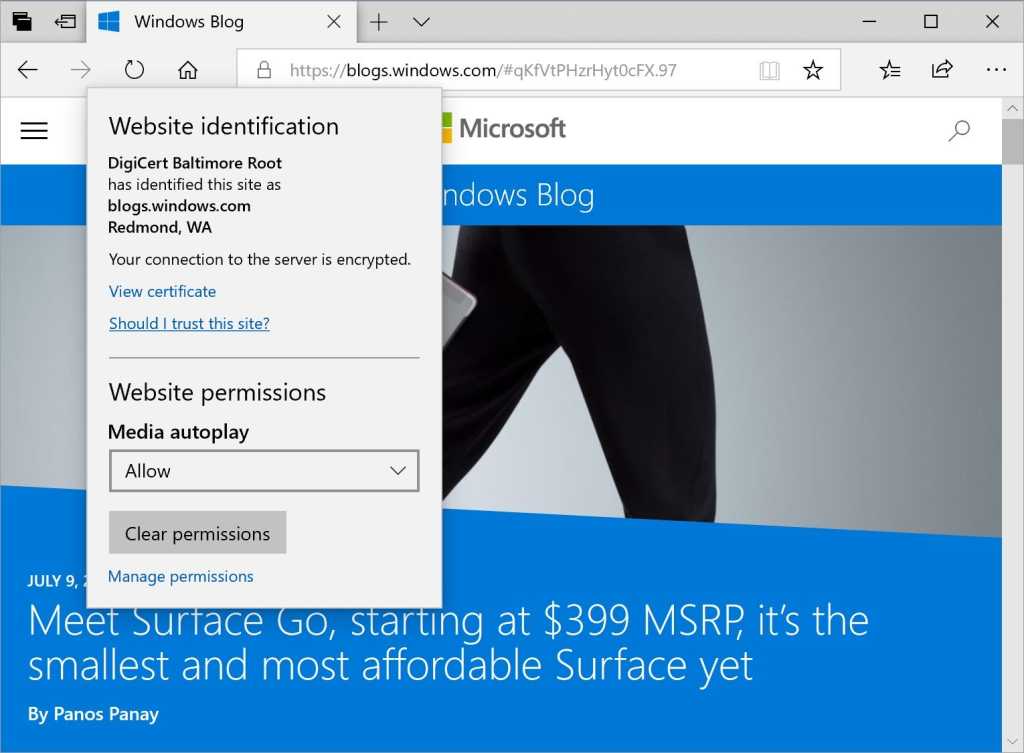 If you’re a Microsoft Edge user, you might find that Windows 10 Insider Build 17713 offers a welcome addition: the ability to manage autoplaying video on a site-by-site basis.

The new Windows build isn’t heavy on new features for consumers, though business users may find some interesting additions: Web Sign-in, Fast Sign-in, and even using biometric logins to log into a remote PC. Microsoft did make some enhancements to how Edge uses PDF files, and even Notepad.

Here’s a look at what’s new:

While Google’s Chrome and other browsers have begun offering users the flexibility to decide what to do with autoplaying video on websites, Microsoft’s Edge hasn’t followed suit, until now. As part of Edge’s new per-site controls, you’ll have the freedom to decide whether video autoplays. To access the controls, click the small lock-shaped icon in the browser.

Edge has added dictionary functions, so you can highlight a word and get a definition. If you open a PDF file within Edge, you’ll also be able to see floating text descriptions for the icons. You can hide the PDF toolbar, too.

The vast majority of users probably have never used Microsoft’s Windows Device Application Guard (WDAG), its secure browser for plumbing the dark corners of the web. (Here’s how.) But one of its weak points, in addition to performance, has been the ability to configure what it does. The new build pushes more options in front of you, as part of the Settings menu.

Microsoft surprised many with its improvements for Notepad that rolled out in Insider Build 17666, and now there’s even more. Build 17713 adds support for users to search for text strings across wrapped text, and there’s something slightly better: the ability to zoom text, too. No longer will we have to deal with tiny text! Just use CTRL+ Plus (Ctrl and the plus sign), or Ctrl + Minus (Ctrl and the minus sign)—the same controls to zoom webpages in and out—to control the size of the font.

These features aren’t available to consumer PCs (yet?) but they’re worth knowing about: If you use Remote Desktop, you now have the option of using Windows Hello to log in on a remote PC as part of the Remote Desktop session. Microsoft has also instituted the ability for corporate to log in with Web credentials, (using something called SAML) as well as what Microsoft calls “Fast Sign-In,” which dramatically decreases the time users need to sign in on a shared PC. All three of these require specific policies to be enabled on the PC, though.

Be careful! Here are things to watch out for

Build 17713 seems a bit more unstable than others, though. Currently there is a bug that blocks the ability to recover or reset your PC, so you may want to delay updates until it’s fixed. The other odd bug is that, with PCs that have multiple monitors, the display may be off a bit. If you see that, try good ol’ Ctrl-Alt-Del to bring up the Task Manager, then hit the Cancel button.