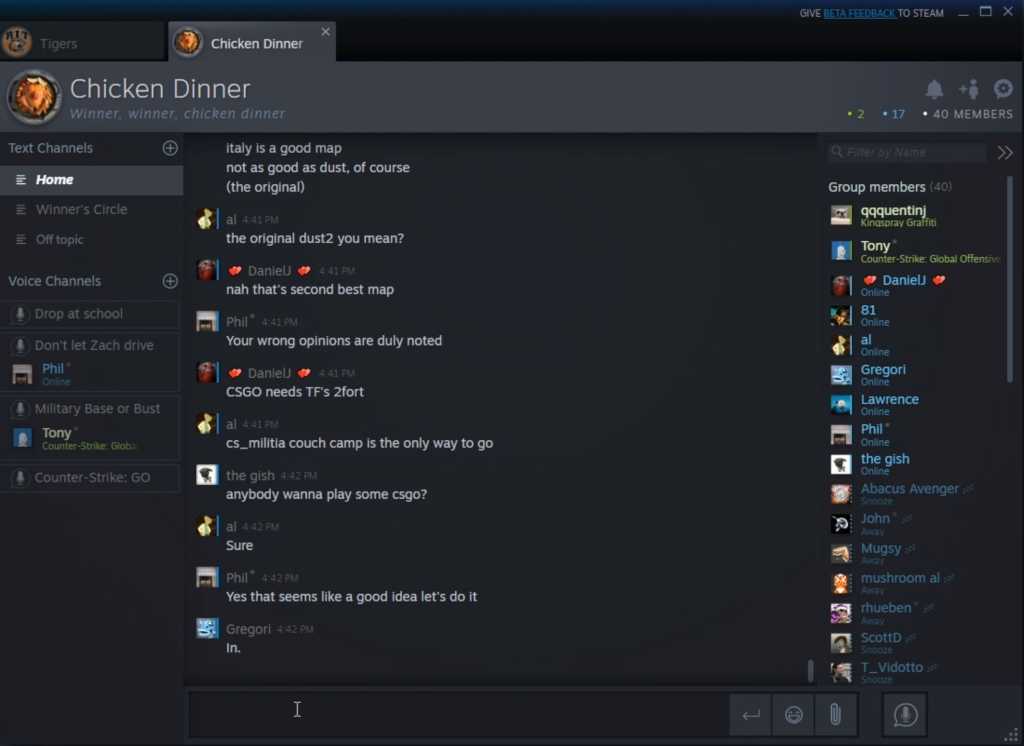 Valve pushed the new Steam Chat to all users yesterday and it’s pretty great! The overhauled client no longer feels like a turn-of-the-century ICQ clone. Instead, the new Steam Chat swipes an awful lot from Discord, the supercharged communication software taking the gaming world by storm. But for all the fresh features, Steam Chat won’t win entrenched gamers back from Discord, and the reason why is right there in the name. It’s Steam Chat.

In most aspects, Valve’s refreshed chat client is just as polished as Discord now. You can easily create persistent group chats that behave similarly to Discord servers, and separate sub-channels for text or voice at any time inside those chats. You can also see GIFs, YouTube videos,Tweets, and other rich text links inside of chat now. Your friends can be grouped by game or favorites, and their status can show deeper information about what they’re doing in a game if the developers support it. So yeah, the new Steam Chat basically is Discord, but in Steam.

It’s way too late to the party, though. We’ve tasted freedom.

Steam may be PC gaming’s 800-pound gorilla, but it’s nowhere near a monopoly. These days, your pals are just as likely to be hanging out on Battle.net or Uplay, or in the standalone launchers for League of Legends and Fortnite. Discord shows you when your friends are online in any game—even Xbox Live games!—and not just Steam titles. You can talk with your buddies even if you’re all playing on different platforms.

Sure, Discord’s slick design and robust feature set may be what initially lured hordes of disgruntled PC gamers away from Steam’s horrific older chat client. (It’s definitely a horde! Discord currently boasts about 130 million users.) And sure, the new Steam Chat mimics Discord pretty well on the surface, so much so that new PC gamers might stick to Valve’s solution rather than actively seek out alternatives (at least until they meet some Fortnite-obsessed friends). That’s probably a win for Valve. Once you’ve sampled the cross-platform convenience of Discord servers, though, there’s no incentive to lock yourself back inside a walled garden.

The new Steam Chat is great, but it’s nothing special—and it’s just one of many accounts you can connect to Discord.