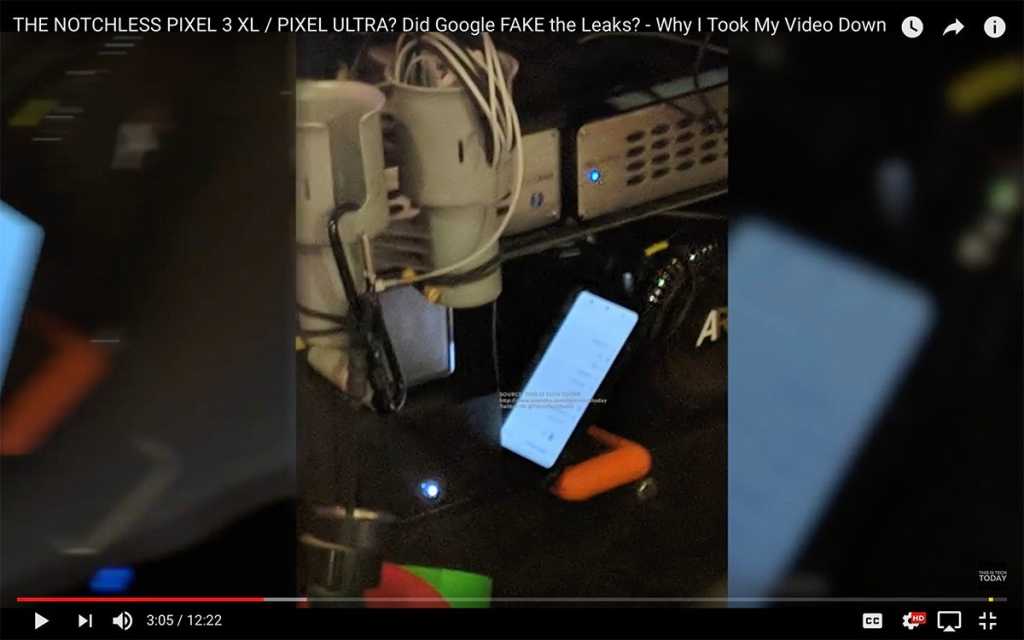 This Is Tech Today

We know so much about the new Google Pixel 3 and Pixel 3 XL phones that some people are starting to think it’s all a ruse. For the past few weeks, a small band of YouTubers has been spinning a tale that basically consists of Google:

That’s quite a trick for any company to pull off, let alone of the of the biggest and most scrutinized companies in the world. So how on earth did such a zany theory get started? And is there any shred of it that’s credible? I decided to investigate.

Pixel 3 conspiracy: How it started

As most Internet-based conspiracy theories, it started with a viral video. On August 5, Jon Prosser put out a Front Page Tech video titled, “GOOGLE FAKED ALL THE PIXEL 3 LEAKS AND BAMBOOZLED US!?” (emphasis his), which tracked the “absolutely insane” theory that the rampant Pixel 3 leaks you’ve seen all over the Internet were all part of an elaborate head-fake by Google.

In the video, he examines EA Sports’ Madden commercial, the Android P beta, and last year’s Pixel keynote to surmise that there could be a third “Pixel Ultra” phone in the works that we hadn’t seen yet, with no notch and barely any bezels. He’s since published several follow-up videos that all point to the same theory: Google is purposefully leaking everything about the Pixel 3 and Pixel 3 XL because there’s a third phone that’s even better.

Pixel 3 conspiracy: How it spread

Even Prosser said we should take his theory with a grain of salt, but this being the Internet, that didn’t stop it from spreading. Front Page Tech’s video was quickly followed up with a vid by M. Brandon Lee on his This is Tech Today YouTube channel that attempted to push the conspiracy one step further with some real-world evidence.

As Lee told me in an interview, “Someone had left me a comment on one of my videos stating that a commercial was being filmed outside of his apartment for Google. He stopped by and saw a phone he believed, and still believes, was a new phone with a thin bezel. This new phone was different from what we have all been seeing in the Pixel 3 XL leaks. He sent them to me late at night and when I analyzed the photos at the time, they did indeed look like a new device.”

Once the video posted, however, Lee quickly realized that probably wasn’t the case. “Within just an hour or so, others began analyzing it and found that there was a significant bezel around the phone and concluded that it was a Pixel 2 XL. Once I saw those images and analysis, I saw the same thing they saw. What I thought I made a video about and what I then realized didn’t align.”

Even though the video was getting some 9,000 views per hour, a pace Lee had never experienced before, he quickly pulled the video and published a new one where he apologized and explained his thinking. But that didn’t dampen interest in the Pixel Ultra: Lee’s follow-up video is his most-watched yet, with nearly 100,000 views and more than 500 comments.

While it seemed as though the Pixel Ultra was dead, it came roaring back last week in a big way. First Prosser put out a video titled “Google Contacted me about the Pixel 3 XL…” As you can infer from the title, a representative from Google’s hardware team contacted Prosser and other YouTubers about using clips during its Made by Google event keynote. Google forbade Prosser from disclosing which clips they wanted to use, but Prosser explained Google is “creating a very specific narrative here with this montage of clips, all of the clips are people mocking them and making fun of them about the leaks and how terrible the (Pixel 3 XL) is.”

Right on cue, Lee followed up with a new This is Tech Today video with his own information “from a source at Google” who claims the Pixel 3 XL leaks are part of a viral marketing campaign designed to “set certain expectations and blow them out of the water.” For his part, Lee says Google hasn’t contacted him directly and he’s “not entirely sure they know I exist, to be honest.” However, Lee believes that Google is indeed making a montage of less-than-flattering clips about the Pixel 3.

Lee has been investigating this conspiracy as closely as anyone, and he’s “still really skeptical that there’s a third device,” Pixel Ultra or otherwise. However, he does contend that Google “is up to something.”

And there certainly is evidence there if you’re looking for it. My guess is that Google is putting together a humorous video of clips that show how crazed people are over the Pixel 3, but there is a sliver of hope that Google’s has a surprise in store for its October 9 event in New York City. And with a month to go until the big event, you can be sure that this theory isn’t going away anytime soon.

“I’m trying to temper my expectations but also have a ton of fun speculating,” Lee said. “And it seems like there are a lot of other people in the community that are having fun, too.”