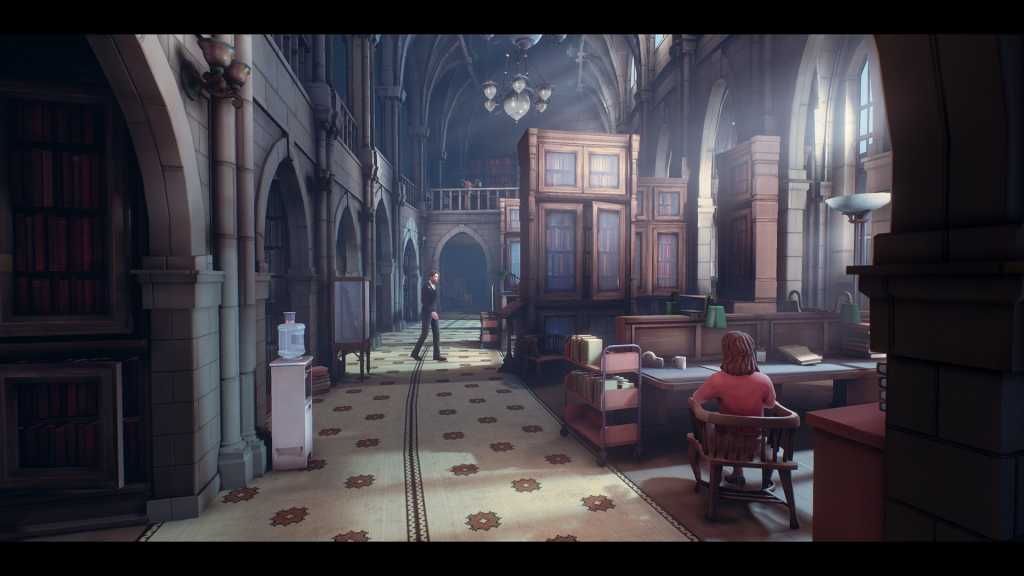 “You’ve already played past the end of the official demo, but you can keep going if you’d like.” That’s when I knew I’d fallen in love with The Occupation, flaws and all. I’d spent the better part of an hour playing, and I didn’t even realize it until the developer tapped me on the shoulder. And then I kept going.

The Occupation is going to be a tough sell I think. It’s complicated, it’s stressful, it’s buggy-sometimes-bordering-on-broken—and it’s probably the most inventive game I’ve demoed in 2018.

The watch is your friend. It’s also your enemy. In The Occupation, every second—and I mean every second—matters.

You’re a journalist in 1980s England, albeit not our 1980s England. The Occupation presents an alternative history, one that’s recognizable but with all the actors changed. Blend together Margaret Thatcher’s conservative movement with some not-too-subtle nods to the UK’s current Brexit infighting, then layer in some Soviet influence.

It’s an unsettling place, and growing more unsettling. A terrorist attack has killed two dozen civilians. In response the UK’s gone the same route as many modern countries, creating the Union Act, a sweeping piece of legislation that tramples over existing privacy laws and threatens the foundations of democracy.

You want to stop it—probably. I admittedly didn’t get far enough into The Occupation in my demo to know your overarching goals, but you’re wandering around a government office building collecting evidence and I have to assume there’s a conspiracy here.

Anyway, that’s the setup. After a lengthy prologue to set up the events above and some of the characters, you’re dropped into the aforementioned office building and…the clock starts.

See, the hook is The Occupation takes place over four hours. Four real-time hours. Tap a button and your character will hold his watch up in front of his place, letting you know both how much time has passed and how much time remains. Follow leads, make use of evidence, and maybe you’ll uncover a far-ranging conspiracy.

Or don’t. Don’t do anything! Sit in a bathroom for four hours and keep flushing the immaculately animated toilets. The Occupation does not care, and actions will proceed apace. After four hours the game will end, and you’ll have four hours of oohing and aahing over toilets to show for it.

As I said, it’s stressful. And the game knows it, and plays up the suspense in myriad charming and frustrating ways. As soon as you enter the building you’re forced to go through security, including a lengthy bag-check procedure. There’s 30 seconds gone, as the guard stands there hemming and hawing about “procedure.” Then once you’re waved through you’re brought to reception, where a man prints out your meeting agenda—another 30 seconds lost as the dot matrix printer slowly feeds paper through.

From there I mostly wandered around at random, as I’d played well past where I was supposed to stop at this point. (The prologue was the intended demo.) I’m assuming though that the agenda I was handed, a schedule of meetings with various government representatives, is real. In other words, if I have a meeting scheduled for 4 p.m. and I go to that office at 4 p.m., the person will be there waiting and we will have the meeting.

And if I decide not to go? If I go AWOL and wander around the building on my own? Will the guards come looking for me? Can I apologize and say I got lost?

Questions, questions, questions. I’ve got a lot of them. Even at four hours long, The Occupation is incredibly ambitious. Sexy Brutale’s loop was only a few minutes, and I still was amazed at the density of its character behaviors. The Occupation, if successful, is an incredible feat to pull off. Unthinkable really, especially with a team this small.

It’s not just the people, either. I lost track of the number of items that are fully animated and simulated, either for story purposes or just for fun. You can close the blinds, then crack one open and peer through it. You can pick up a record sleeve, remove the vinyl record from inside, put it on a turntable, move the arm into place, then play the record from the point where you dropped the arm. Using a keycard requires physically pulling the keycard through the slot. There are fully functional tape decks and pull-chain toilets and computer systems and overhead projectors and filing cabinets and the list goes on (and on and on).

Overwhelming. That’s a good word for it, and the amount of choices and interactions available are even more intimidating when you’re conscious of time constraints.

It’s also a recipe for bugs, and indeed I saw quite a few, be it objects not behaving properly or conversations playing a bit wonky. The person across from me had even more issues, even falling through the ground at one point I think. A bit worrisome, when the game’s only a month from release.

No, I don’t think The Occupation will fix all its problems before release. I also…don’t really care. What’s here is so unique, so genre-breaking, I almost can’t believe it exists. It’s a real detective game, one that steadfastly refuses to hold your hand. It’s also highly political, touching on innumerable issues people confront daily. And it presents events in real-time, a feat so rare I can count on one hand the number of games that pulled it off successfully.

I have a feeling it’ll be divisive, and flawed. I’m also confident in thinking The Occupation will manage to be more important and influential than a hundred perfectly polished blockbusters. That’s just the way of it, most times. Look for it to release on October 9.