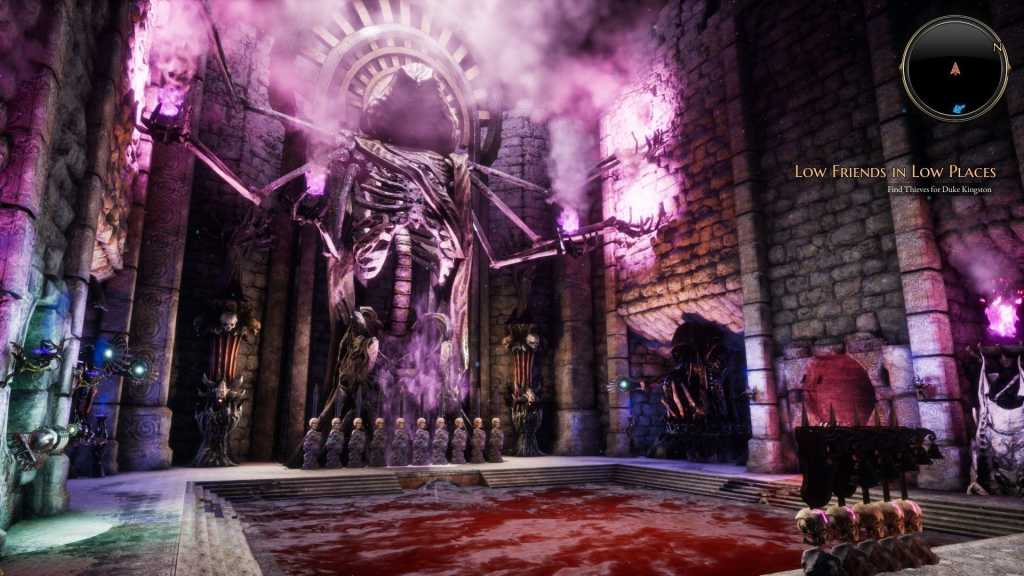 The fate of the world is at stake, and I haven’t even made it out of the starting city. The Bard’s Tale IV seems long, to say the least—I’m ten hours in as I write this, and I feel like I just finished the prologue. Suffice it to say, we’re not slapping a score on this one yet.

And perhaps that’s a good thing, because The Bard’s Tale IV ($35 on Humble) is a fascinating game that desperately needs polishing up.

Let’s just deal with performance first, because it really is abysmal. Listen, I’m running a PC with an overclocked i7-5820K and an Nvidia GeForce GTX 1080 Ti. It is absolute overkill for even the most cutting-edge games, and The Bard’s Tale IV isn’t one of them. Art direction is strong, but you wouldn’t look at it and go “Wow, what a technical feat.” Indeed, the recommended specs on the Steam page are a fairly reasonable i5-4590 and a GTX 970.

I cannot get smooth performance out of The Bard’s Tale IV though. It doesn’t matter if I’m running on Ultra, it doesn’t matter if I drop everything down to Medium, I can’t maintain even 30 frames per second at times let alone 60—at 1080p, no less! I do see a 5 to 10 frame per second bump when I lower the quality, but there’s still noticeable hitching in areas (especially the initial city and anything else outdoors), lots of texture pop-in, and lengthy load times.

Oh, the load times. I’ve grown fairly accustomed to a long up-front wait these days, the price we pay for seamless open-world background loads. But in The Bard’s Tale IV, every load time is hefty—like, at least 30 seconds. Need to pop into the Adventurer’s Guild to get your next quest? Expect a 30-second load into the building, then another 30 to 60 second load on the way out, every single time.

And The Bard’s Tale IV just doesn’t look that great. That’s the kicker. I’m never going to be excited about poor performance, but there are games where I at least sort-of understand the trouble. The Bard’s Tale IV has great art direction as I said, but the models and so-on, the raw guts of it, don’t look like anything special. There are a lot of moving parts, but coming off the back of Destiny 2 and Shadow of the Tomb Raider I can’t help but feel The Bard’s Tale IV needs another handful of optimization passes.

Then there are all the bugs, many of which are minor but still really damn annoying. My least favorite, and one I’ve come to dread in my seven hours, is a bug that makes it so none of your gear’s stats are applied correctly. This is important, because in The Bard’s Tale IV your stats (Strength, Constitution, Intelligence, and Armor Class) primarily come from your gear. Multiple times now I’ve thought “Why is this character doing almost no damage now?” only to check and notice their Strength is set to 0 for no reason.

The only fix I’ve found? Reloading, which is easier said than done, as you have to either reach a save point or exit to desktop and then run the game again. Oh, and sit through those interminable load screens one more time.

So yeah, it’s frustrating. Fixable? Absolutely, and I’ve no doubt a lot of these minor issues will get stamped out in the next week or two. That’s the way of things these days, and it’s definitely the way of things when it comes to InXile’s games. I loved Wasteland 2 and Torment: Tides of Numenera but bug-free they were not.

Still, if you’re hotly anticipating The Bard’s Tale IV, it might be worth holding off a bit until some of the technical issues get sorted. I’ve seen characters disappear from the world, quest scripting break, and innumerable other problems so far.

Down in the underground

It’s a shame too, because what I’ve played has been fantastic. How funny, to see inspiration come full-circle. First Legend of Grimrock borrowed from Bard’s Tale to create a modernized dungeon crawler, and now Bard’s Tale borrows quite openly from Legend of Grimrock—though not without some interesting changes.

There’s no grid, for one. It’s the feature I probably associate most heavily with the dungeon crawler genre, grid-based layout and movement. Legend of Grimrock even leaned into it, allowing you to turn off the automatically generated map and draw your own on graph paper.

In The Bard’s Tale IV the map is still based on a grid, and in some areas you can pull up the map and see those squares. You have freedom of movement though, almost as if you were playing an Elder Scrolls game. (You can turn grid-based movement back on in the settings, if you’d like.)

It’s a change with far-reaching consequences, as it evidently required The Bard’s Tale IV to come up with a new combat system too. The solution is either a high-concept card game or a very constricted tactics game, depending on your point-of-view. Fights are played out on a 4×4 grid, and your actions governed by a pool of points. Swinging your sword might cost one point for instance, while a “Rain of Arrows” might take two points and an extra turn, although it’ll also strike three squares at once.

I’m finding it very satisfying, especially as I get further into the game and have more options. The Bard class is particularly interesting, as most of their attacks require swigging alcohol beforehand—and later, you can open up a skill that throws the empty bottle at an enemy for extra damage. I wish you could have more skills accessible at a time, as the skill trees are large and you only get to “memorize” four per character. There’s a lot of depth though.

Those are the two aspects that feel the least dungeon crawl-y, and the two I expect will be most divisive for longtime Bard’s Tale fans. And that’s fair—they’re big changes. To some extent, The Bard’s Tale IV asks you to reconsider what constitutes the dungeon crawler genre.

I’ve settled on level design, because that’s where The Bard’s Tale IV excels most, and it’s what kept me playing even after I got frustrated by myriad performance issues. You start in the oft-threatened town of Skara Brae, a throwback to the old Bard’s Tale games, but soon venture into a vast underground area (“Skara Brae Below”) with secrets packed into nearly every corner.

I can’t count the number of times I’ve wandered deep down some corridor, pushed a switch, watched part of the wall disappear, walked out, and thought “Wait, I’m back here?” I love that feeling. It’s one of my favorite parts of any dungeon crawler, and in The Bard’s Tale IV it’s pervasive.

There are also hidden nooks and their equally hidden chests, weakened walls to bust down, mechanical gear puzzles to solve—so many secrets. And those are just the small ones. One area I’ve barely scratched the surface of, Mangar’s Tower, is essentially an enormous puzzle box. And then there’s this tantalizing door governed by seven switches tucked into the darkest corners of Skara Brae’s cellars:

As with Legend of Grimrock, I find myself wishing non-dungeon crawlers put as much work into their environments. I remember being so excited to find that first scrawled puzzle in The Elder Scrolls V: Skyrim, only to realize later it was…basically the only puzzle in the game, just copy-pasted as needed and with a few minor details changed. The Bard’s Tale IV makes good upon its puzzles, and it’s a delight wandering in circles and on the fifth time realizing “Oh, I missed that fake rock the first four times through here.”

Or at least it’s a delight for me.

Seriously, though: Wait a few weeks if you can. The Bard’s Tale IV ($35 on Humble) is shaping up to be a special adventure, one of my favorites of 2018, but I’m enjoying it in spite of itself. Exploration is a core focus, and it’s been top-notch so far—but I really wish I could enjoy exploring without the painful load times, or the all-too-frequent framerate hitches.

I’ll keep plugging away at it, and hopefully in the next week or two some of the more egregious issues get patched out. Stay tuned.