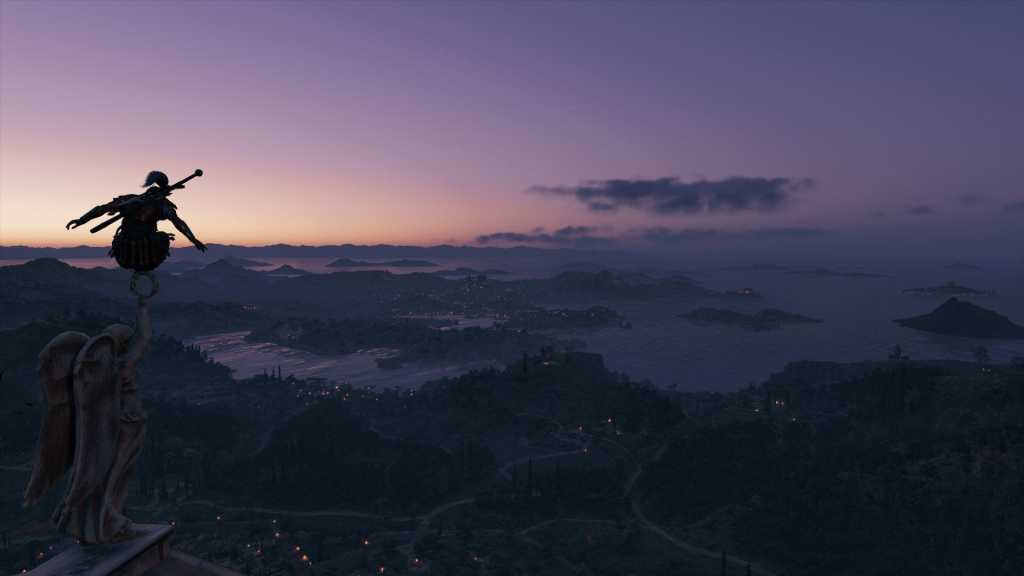 I haven’t finished Assassin’s Creed: Odyssey ($60 on Humble), nor will I for a while. I’ve been playing it for days now, over 30 hours and counting. “Surely I must be closing in on the end,” I keep thinking. Then I check the map and find I’ve explored less than half of it. My quest log tallies at least 40 active missions at the moment. Everywhere I go, there’s more stuff.

It’s no wonder Odysseus was away from home for two decades.

This is Assassin’s Creed now, I guess. The “Return to Our Roots” direction of Unity and Syndicate is dead. Instead Ubisoft rebooted the reboot, with last year’s Origins hearkening back to the sprawling world of Assassin’s Creed IV: Black Flag. It traded stormy Caribbean seas for the dusty deserts and hidden oases of Ptolemaic Egypt, but the core loop felt similar.

And Odyssey follows the same blueprint, although Egypt’s now been traded in for Ancient Greece. We haven’t gone quite as far back as the days of Odysseus or even Homer, but it’s still a time of legends—Socrates, Hippocrates, Euripides, Herodotus, and other figures who loom large in the Western tradition.

It’s also the time of the Peloponnesian War, the backdrop for Odyssey’s story. Sparta and Athens are fighting for control of Greece, which of course in true Assassin’s Creed fashion is just a front for whatever the Templars are calling themselves circa 430 B.C.E.

You’re caught up in the middle of it. You play as either Kassandra or Alexios, largely an aesthetic choice of male or female protagonist. I chose Kassandra and don’t regret it, as I love her voice actor and find Alexios a bit hammy, but to each their own.

In either case you’re a mercenary who’s lived most of your life on the remote island of Kefalonia. Circumstance conspires to send you out into the larger Greek world, looking for clues to your heritage. And that’s how the first uh…20-odd hours go.

More even than Origins, Odyssey is packed with activities. Some are well-written and engaging side quests, but the majority are open-world fluff—forts to take down, animals to kill, treasure chests to pop open. There’s also an activity themed around the Peloponnesian War, with Kassandra/Alexios weakening each city-state and then pitching in to either defend or attack it alongside Athens or Sparta.

You’re not the only mercenary either. Odyssey includes a low-key version of Shadow of Mordor’s Nemesis System, sending named bounty hunters after you when you commit crimes. It’s not quite as silly or in-your-face as the actual Nemesis System, but some guy with “The Venomous” appended to his name will probably arrive with a poisoned sword for instance.

Oh, and did I mention there’s ship combat? Greece is an archipelago, so as in Black Flag you’ll spend a lot of time sailing (or rather rowing) from island to island, fighting off pirates when necessary.

It’s system after system after system layered on top of each other, and that’s before we even get into the new dialogue trees. Origins made a stab at folding some Witcher 3-style RPG influences into the series, but Odyssey goes even further by letting you engage in conversations and (very) occasionally even make choices that affect the outcome of quests.

Some of these systems need more polishing. Dialogue can vacillate wildly for instance, with Kassandra transitioning from dead calm one line to irate the next. It smacks of a series trying to find its footing, not quite comfortable with this new approach.

But it’s also cool to see Assassin’s Creed branch out. It’s hard to believe Syndicate was just two entries ago, because that version of the series is almost unrecognizable at this point. And I don’t mean that in a bad way—I think Odyssey is incredibly ambitious, and a better game than Syndicate. It also has very little in common with Assassin’s Creed as it existed up through 2015 though.

The writing is the real draw though, at least for me. It’s a slow burn, and much has been made already of the fact that the story doesn’t really get going until 20 or more hours in. There’s one layer of the story to get your journey started, then another deeper layer you discover after the prologue, and then a third deepest layer that takes longer to get going than the entire run-time of some games.

Pacing isn’t Odyssey’s strong suit, and more than once I found myself wishing it could get to the damn point. But as much as I hate to say it though, the slow burn pays off. There are some actual surprises in Odyssey, particularly as it relates to the overarching meta-story of the series. Origins felt like the first game to pay the present-day aspect any real attention in at least five years, and Odyssey takes those parts even further. It’s as if someone at Ubisoft finally came in and said “Hey, let’s uh…let’s actually put some work into this whole storyline we’ve left dormant for half a decade,” and that’s cool.

And Kassandra carries the game through even its slowest moments—or Alexios, I guess, though I can’t speak to that version of Odyssey. I never fell in love with Origins’s Bayek, and while he grew on me over time I still found him sort-of dull. Kassandra channels Ezio’s swagger again, for better or worse.

On the one hand, it’s bizarre to me that every fan-favorite Assassin’s Creed character fits the same mold. On the other, Kassandra’s a hell of a lot of fun. She can be snarky, scary, and everything in between depending on how you play her. I’ve really enjoyed her adventures through Greece, and appreciate that like Geralt in Witcher 3 she’s a strong character with her own personality. It encourages you to roleplay as Kassandra, not as yourself-playing-Kassandra if that makes sense.

Early on for instance I let an entire family be killed by the local troops, afraid the plague they were infected with might sweep through Kefalonia. It was a tough choice, and I could’ve chosen to intervene—but would Kassandra intervene? Would she feel like she had more authority than the attending priest? And would she even care about this random family? I thought not, and so I made the call to let the slaughter continue even though in most RPGs I’d probably intervene.

I like those sorts of scenarios, and I wish Odyssey had more of them. For all that Ubisoft talked about “Choice” as a central theme in Odyssey, it rarely arises in any meaningful way. Most branches are ones of tone more than content. But hey, this is the first Assassin’s Creed to even attempt this. I’m curious whether its eventual successor will head even further down this path, and if so what that means for the series. Odyssey is as I said immensely ambitious. Can Ubisoft really keep this up? And on a semi-yearly schedule? I’m not sure.

Imagine if CD Projekt put out another Witcher 3 every two years. It defies belief.

Anyway, those are my thoughts on Assassin’s Creed Odyssey ($60 on Humble) as they stand 30-odd hours in. We’ll update this review with a score and some final thoughts whenever I finish, hopefully in the next week or so. Before we go I should also mention that performance has been solid. No surprise there, since this is basically an Origins reskin, and Origins also ran great. Draw distance is still the star of the show. Seriously, pick a monument-size landmark (like the statue of Zeus on Kefalonia) and then track how far away you can get while still seeing it. Hint: Very far, at least if you’re running some top-end PC hardware. Just check out the picture at the top of this review.

It’s an immense achievement for the series, and an exciting one. Assassin’s Creed felt like it lost its way for a while there. Origins and Odyssey mark a departure from tradition, but a necessary departure. It’s injected so much life into the once-sagging framework, and reminded me of the days when Assassin’s Creed felt like it pushed the boundaries of open-world games. Exciting—even if it sucks up 50 or more hours of your life in the process.