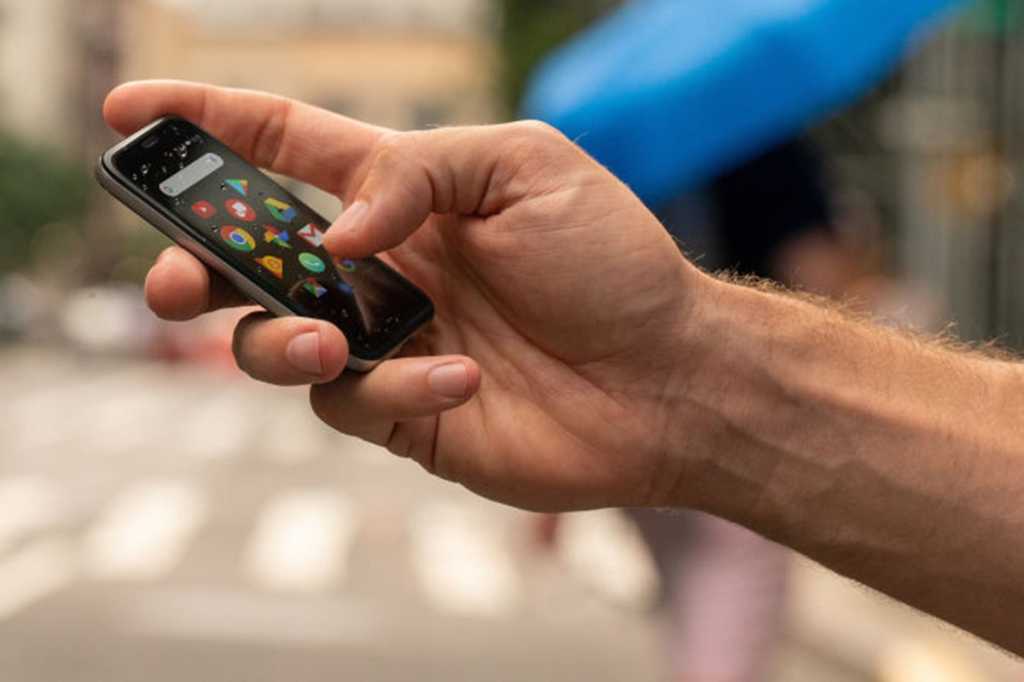 We’ve been reading about the specter of a Palm reboot for a while now, so Monday’s release of a new handset with the company’s iconic square logo on the back wasn’t really news. But it still has its surprises:

So the new Palm phone isn’t really a Palm phone at all. Heck, it’s not even really a phone. Sure, there’s a 4G LTE chip in it, but it’s no more a phone than the Apple Watch is. It relies on Verizon’s NumberShare service to act like a phone when your actual phone isn’t around.

As you’d expect, the new Palm isn’t quite like any Android phone on the market today, with a teeny display and other differences. Here are the basic specs:

As you might guess from the display size, it’s small. Compared to the original iPhone (which had a 3.5-inch display), the new Palm is downright tiny:

It kind of looks like an iPhone, actually. The corner are dramatically curved like Apple’s original rounded rectangle, and a single visual home button is positioned below the screen. The back has a Palm logo in the center, with a vertical camera array in the top right corner like the iPhone XS. It also weighs just 62 grams, equal to the weight of 3.5 Note 9’s.

The new Palm runs Android Oreo 8.1, but it’s nothing like the Android on a Galaxy or Pixel phone. For one, there are icons all over the home screen, and you’ll need to swipe to find the one you’re looking for. And true to Verizon’s reputation, it’s loaded with carrier apps.

Because it runs Android, you can download and install apps from the Google Play Store, but its 3.3-inch screen will preclude most of them from being very usable. The button on the bottom is responsible for much of the navigation, including back, home, and recents, while the power button summons Google Assistant. It also makes use of Android’s shortcuts, available by long-pressing on an icon.

Designed to get you off your phone

If all of this sounds like a watch, you’d be right. The new Palm isn’t meant to replace your phone (and really, it can’t), it’s meant to supplement it. The idea is that anyone who buys one wants to use their phone less. With a Palm in your pocket you won’t carry your giant phone around as often, and because the experience is so stripped-down, you won’t use it as much.

To drive that point home, the new Palm includes a setting called Life Mode, which you might call Extreme Do Not Disturb. It essentially turns your Palm phone into an emergency device, shutting down not just notifications but also Bluetooth and LTE while the screen is off. The idea is that you’ll turn on the phone only when you need to make a call, at which point the cellular radio will switch back on. Whether that works as advertised or actually gets people to put down their phones remains to be seen.

What this means to you: The irony of the new Palm phone is that it’s asking you to add another screen to your life to reduce your dependence on screens. Most people who would consider buying one will probably already have a smartwatch, and at $350, it’s not exactly an impulse purchase. But then again, failing to find an audience could be the most Palm thing of all. We’ll see if there’s any interest when it launches in November.