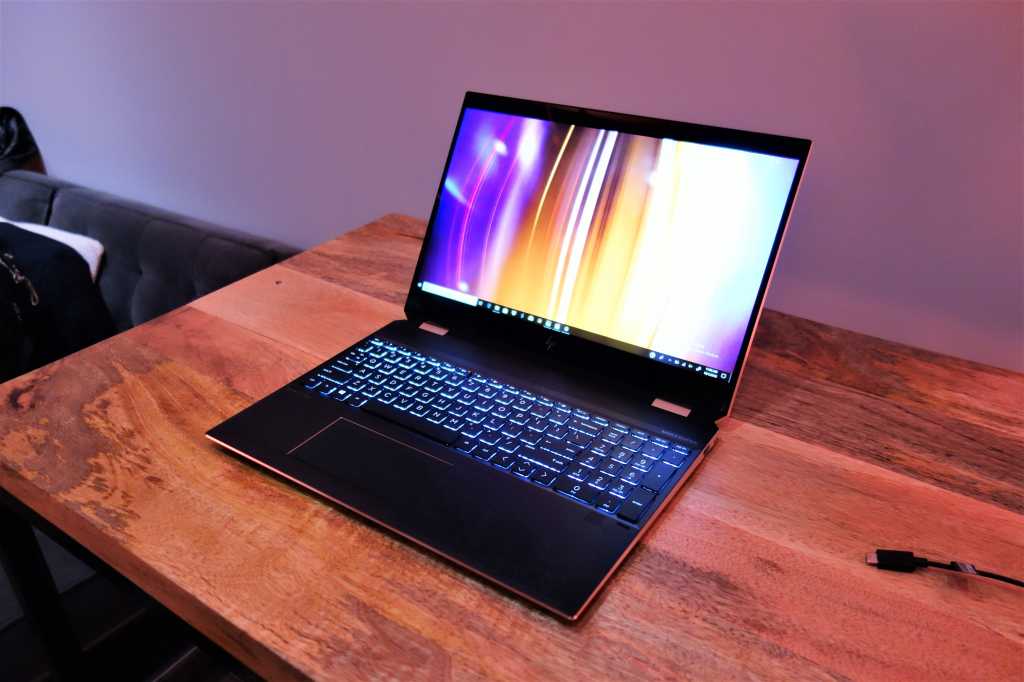 HP designed its 15-inch Spectre x360 notebook line with performance in mind, and the new HP Spectre x360 15 (2018) leaps ahead with optional six-core Intel “Coffee Lake H” processors inside, plus some design tweaks on the outside, too.

We don’t have a full spec sheet, but here’s what we know, courtesy of HP:

Editor’s note: Our hands-on was conducted at an HP event which showed off a new HP Spectre x360 13 as well, emphasizing battery life rather than performance.)

We had a chance to try out the new HP Spectre x360 15 (as well as its smaller sibling, the Spectre x360 13) at a recent HP showcase. Two new additions immediately stand out: the “faceted” corners, and the small privacy switch that disables the webcam.

Both rear corners of the Spectre X360 15 are faceted, so that the “corner” is essentially a hexagon. HP placed the power button on the left-hand facet, and a Thunderbolt-enabled USB-C port on the right-hand facet. (A second USB-C port is on the left, and on the right, there’s a USB-A port.)

The idea, according to HP, is that the offset port will allow you to plug in a power cord without jamming it against the back of a desk or wall. While it may seem a bit gimmicky in concept, rear-mounted USB ports can be difficult to find without fumbling around. We’ll have to see how it works in the real world.

A more interesting twist is webcam “kill switch” on the side of the Spectre x360 15. The Spectre’s webcam is mounted in its traditional location, at the top of the display, alongside the depth camera. But there’s no shutter or slide to assuage the fears of those worried about hackers spying on them without their knowledge.

Instead, flipping the switch kills the electrical connection to the webcam, HP says—in fact, it disappears from the Windows Device Manager, as the video below shows. Is this enough security for the paranoid? My guess is no, not entirely. But it’s an ingenious approach to the problem.

HP also removed the fingerprint scanner from the side of the Spectre x360 and moved it to a more conventional location on top of the palm rest. It feels like a more natural position.

Unfortunately you can’t turn off the fan entirely. HP includes what it calls the “HP Command Center” utility to manage various thermal profiles. In the 13-inch version you can enable a “quiet mode” that minimizes the fan. With the 15-inch version, you can trigger both “cool” and “performance” modes to increase the fan and cool the device.

HP’s display didn’t strike me as that unusual, though there are options to blast out up to 650 nits using select Sure View panels. That’s way more than the 260 or so we consider to be a comfortable viewing brightness, but it’s good news if you’ll want to use it outdoors. HP shrank the screen bezels by about 12 percent, though I doubt you’ll notice. The Spectre x360 15 will support an additional two 5K displays via the USB-C ports, HP says.

HP’s promising the larger chassis of the Spectre x360 15 will hide quad speakers with a discrete amplifier. Bigger speaker boxes will create a bigger boom. Like other HP laptops and tablets, the audio is crafted by Bang & Olufsen.

Performance, though, will be what differentiates the Spectre x360 15, in HP’s mind, and we weren’t able to test that. In addition to the new six-core Whiskey Lake processors, the HP Spectre x360s will boast new gigabit Wi-Fi provided by Intel—through you’ll see some benefit from that only if you also own a compatible router or access point.

HP’s Spectre x360s seem to perpetually win our Editor’s Choice awards. Will the Spectre x360 15 do the same? On paper, its chances are good.