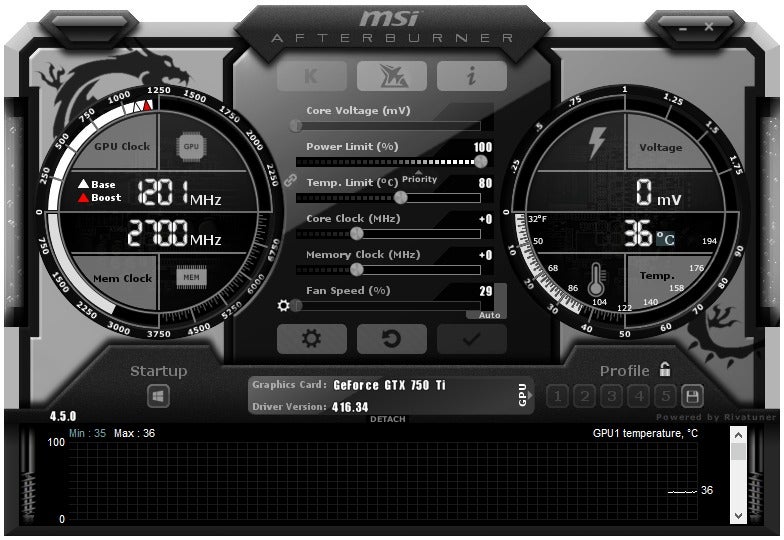 MSI Afterburner is a popular overclocking tool and comes from a trusted name in gaming. It’s abilities as

MSI Afterburner isn’t exactly game capture software, but like Nvidia’s GeForce Experience, it’s a popular program that gaming enthusiasts might already have on their system. Afterburner is predominantly a graphics card overclocking tool—and not just MSI graphics cards, either—that comes with a second download called RivaTuner Statistics Server. RTSS is a great tool for limiting the frame rates of your games if your GPU is working harder than necessary. Together these two pieces of software can not only overclock and tweak your system, but record game capture video as well.

In Afterburner 4.5.0 you get to the video capture settings by clicking on the settings cog icon in the center of the main dashboard. Then in the new window that opens, use the scroll arrows in the upper right corner to get to the Video capture tab. By default, you configure your own hotkey to start recording, but you can also set it to automatically record every time you start a game.

There are many other settings below that. You can change the video and container formats, for example, though your choices are limited. The default video format is MJPG, but there’s also VFW, NV12, and RTV-1. As for the container format (the file type for the video) your only choices are AVI and MKV. Still, this is a power user tool and for those who care it’s an excellent opportunity to customize video captures.

Afterburner also lets you set the quality type as a percentage as opposed to the usual “low, medium, and high” options.

You can adjust the frame size, the frame rate (from 0 up to 100), frame rate limit, and where you want to save your files. For audio you can record both the game sounds and your own microphone.

Some of these features are quite common in other suites, but the fine grain tools—such as the frame size, and the choice of compression and container formats—are not.

For this round of testing, we used our standard budget test rig and left all settings as-is with no adjustments, the only exception being that we set ctrl + F5 to be our hotkey for starting a recording.

Running the Metro: Last Light Redux benchmark three times with everything set to low, our rig went from an average frame rate of 58.67 without recording software active down to an abominable 39fps with Afterburner engaged. It went from nearly hitting the “golden standard” of 60 frames per second to just barely above console level. That’s still playable, mind you, but it offers a striking difference in play quality.

Testing with The Division benchmark didn’t fare much better,. Without Afterburner running we were hitting 56.3 frames per second, and that dropped to 42.5fps with the capture software running.

A lot of PC enthusiasts adore MSI Afterburner as an overclocking tool, and with a mid- to high range gaming machine, Afterburner’s screen capture tools are probably just fine. If you’ve got a budget rig, however, you can do much better. On top of that, Afterburner is not easy to use, the amount of tweaking is probably overkill for most, and the fact that it depends on Riva Statistics Tuner (meaning you need two tools to do one job) isn’t great.

Bottom line? This is not the screen capture tool you’re looking for.