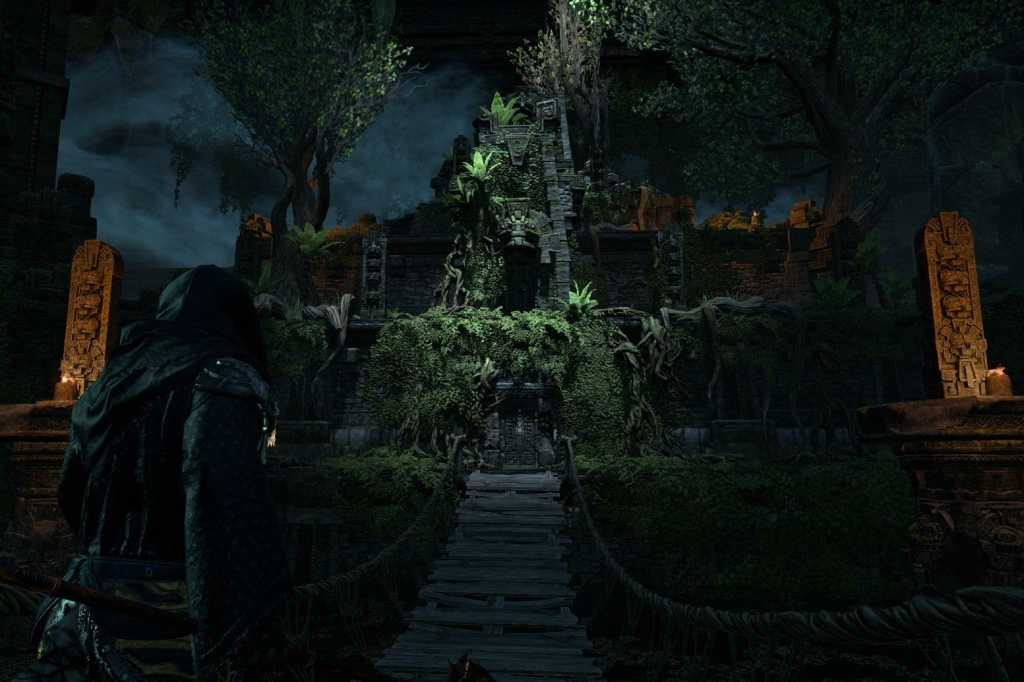 It’s hard to love a swamp. Mountains have majesty, deserts have mystery, but what do wetlands have? I imagine some Joe on the street would boil it down to something like “muck, malaria, and mosquitoes.”

Even so, Famia Mercius, an antiquarian who’s a great admirer of the Elder Scrolls series’ lizard-like Argonians, is trying to get me to love the surrounding marsh as she does. She’s not doing such a hot job. She slaps a gnat off her neck while in the middle of a giddy introduction, and her stone house suggests she retains some reservations about living like the locals. I can’t say I blame her. After all, the place (and the name of the DLC) is called Murkmire, which hardly sounds like it’s going to rival Tahiti in vacation listicles anytime soon.

Murkmire is a risky setting; I doubt it could have sustained one of Elder Scrolls Online’s largest “chapters” like Morrowind or Summerset. You won’t find traditional fantasy crowd pleasers like snowswept peaks and elven towers here.

Instead, I spent roughly half my 10 or so hours with Murkmire sloshing and slooshing through a flat expanse of puddles punctuated by a thousand spindly trees; the rest of my time consisted of sloshing and slooshing through puddles pooling between rocks. Murkmire occasionally channeled Indiana Jones by sending me into long-abandoned Argonian ziggurats stuffed with blow-dart traps and spikes, but I sometimes got the feeling that developer ZeniMax Online was trying to minimize the time you spend here. Murkmire isn’t even that big: You’ll only find two new delves and two new world bosses, although there’s quite a few new gear sets and motifs for crafting.

Born on the bayou

And yet it’s needed. After all, Elder Scrolls is often at its best when it runs us along the rough edges of fantasy worlds.

Longtime fans know the Argonians come from the Black Marsh, but in the past we’ve only caught glimpses of it in zones like Shadowfen. There, the lizardkin remain overshadowed by cultural forces that have loomed over them for years, be they the Dark Elves that use them as slaves or the Imperials that hold them in only slightly better regard. They’re treated like turds under the world’s boots, forced to live in muddy hovels on the edges of towns. I used to see those muddy huts as evidence of a proud culture; Murkmire, though, hints that they might represent forced poverty.

Murkmire lets us see Argonian life when they live on their own terms. The main city of Lilmoth is an agreeable one (and one you may spend a lot of time in, considering that crafting benches are as close together here as they are in player-favorite Rawl’kha).

Here, they live in wooden, comfy homes with stilts that raise them above the muck. Occasionally you’ll find some of these huts built around a hist tree—which Argonians revere as other races revere gods—creating a structure that’s at once a village and a treehouse. Frankly, I’d kind of like to live in one of these huts myself, but the only new player house here is a staggeringly large half-sunken ziggurat with the lower level magically sealed off to serve as an aquarium. Considering the state of the rest of Murkmire, I’d be worried about gentrifying the neighborhood.

Here, so far away from the world’s usual comings and goings, the Argonians retain their pride. Some clans even retain their ferocity, undulled by generations of bondage weighing down their kin elsewhere.

Virtually every quest allows a peep into Argonian society. Books found throughout Murkmire tell of maturity rituals involving pottery; missions from wanderers emphasize the importance of roots from a hist tree. In side quests we catch glimpses of the changes Argonian inclusion in the wider world has brought, be it conniving over property or betrayals for the sake of nursing skooma addictions. Through it all, the inhabitants of Murkmire remind us that theirs is a social society that has changed its perception of itself, right down forsaking their old ziggurats—the “stone nests”—for the impermanence of their wooden structures.

There goes the neighborhood

It’s hard to blame them; change comes as frequently as the rain in Black Marsh. It’s fitting, then, that Murkmire’s best stories deal with the outside world’s attempts to change the swam for its exploitation. Famia herself is a part of that heritage: She’s here to collect artifacts and cart them off to the Imperial City because “Argonians just don’t care about their history that much.” Her heart’s in the right place, but it’s an argument that’s been used for bad ends too often in the past.

But her investigations lead to a fascinating glimpse into the depths of the Argonian relationship with the hist, even if the overall main story slips too easily into the formula of betrayals and gotchas that make up so many of ESO’s tales. Key characters pop into the narrative with the startling swiftness of a jack-in-the-box, while promising characters like the Khajiit mercenary Zadaza get too little screen time. All the same, I admire the story at its core, along with its handling of the complex and sometimes counterintuitive alliances that come out of a colonial legacy.

And if you’re sick of swamps and the like: Don’t worry, much like many ESO patches, it gets trippy. Murkmire’s main story goes places I never would have guessed based on its fens and its Tomb Raider-style romps.

You’ll never see those trippy settings outside the main story. The mire itself is so soaked in Argonian culture that foreign additions stick out like a blight. The most notable of these is the new four-man Blackrose Prison arena, an abandoned Imperial structure that’s now home to a band of ruffians who are holding a random Wood Elf’s friend hostage. Much like the Maelstrom Arena, it’s a brutal place. I like the design; too often ESO has stuck to traditional arena designs for these kinds of things, while Blackrose sends you battling through rooms with varying challenges and layouts. Ultimately, the prison will likely be the reason why you return to Murkmire after finishing the story.

But the story and the zone together represent one of those rare moments when ESO distinguishes itself by bringing something genuinely new to the Elder Scrolls universe. It’s one big reminder that there’s often beauty and rich variety in things we too quickly dismiss as ugly. Murkmire may look bland in comparison to a wonderland like Summerset, but that’s only when you’re drinking in the big picture.

Look more closely, and you see new species such as “swamp jellies” and “catapult cabbages.” You’ll find waterfalls where you expected to find stagnation. For some of us, I imagine it’s a metaphor for appreciating the Argonians themselves, who reveal a depth that arguably exceeds that of the other races when you examine them more closely.

Elder Scrolls Online’s Murkmire DLC is freely accessible with an ESO Plus subscription. Alternatively, you can buy it for roughly $20.00 through ESO’s in-game Crown Store.