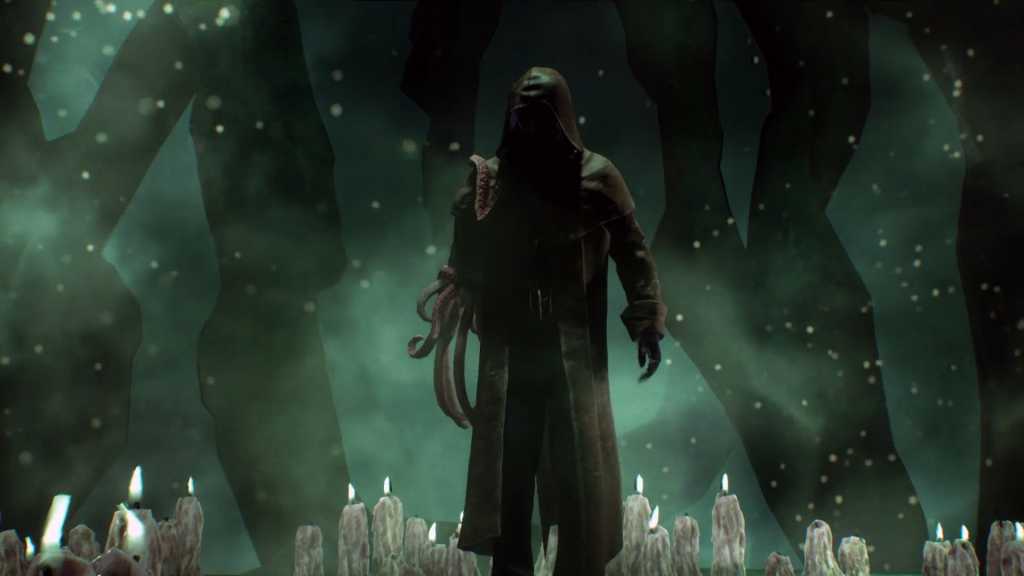 Call of Cthulhu should be a great horror-detective game, but lackluster mechanics and a heavy-handed story undermine its stronger points.

Deep under the island of Darkwater, something stirs. Leviathan. I’m not sure what that word entails yet, but I’ve seen the signs—the dead whales, the greenish pall on the town, the nightmares. I know Leviathan is nothing good. Now if only I could figure out why, pry up the secrets hidden under these rotting floorboards and in crumbling mansions.

Who is Sarah Hawkins, and how did she die? Or did she die? And what of her husband, Charles Hawkins? Where is he? And uh…why don’t people’s mouths move when they’re talking to me? Is that part of the horror? I can’t tell.

Call of Cthulhu ($60 on Humble) is a game I should love. Hell, at points I did love it. Based to some extent on the Call of Cthulhu tabletop game, this video game adaptation takes cues directly from its analog counterpart. You play as Edward Pierce, a detective sent to Darkwater to investigate the death (or disappearance) of Sarah Hawkins, a painter known for her terrifying portraits of otherworldly monsters.

Pierce is very much a detective, and that’s why I should love Call of Cthulhu. Aside from one late-game sequence there is zero combat to be found here. You’re here to dig up clues, to talk to witnesses, and to draw conclusions. Like most great Lovecraft adaptations, Call of Cthulhu operates under the idea that the mythos is unknowable, unbeatable. The best you can do as a mortal is try to stay out of its way.

And when Call of Cthulhu leans into this aspect, it’s fantastic. The first few acts are delightful, despite some cliché environments, low-budget visuals, and clumsy character animations. Pierce alights in Darkwater and starts looking for answers in the local bar, among the fishermen and the smugglers and the overworked police. He then manages to gain access to the Hawkins mansion, a part of which burned down recently, there to find even more clues.

It’s slow and it’s deliberate, and the tension builds. The charming captain who brought you to Darkwater maybe isn’t so charming as he seems. And hey, the Hawkins mansion has a secret tunnel that leads into a network of caves—surprise! Maybe all those references to the “Miracle Catch,” an enormous whale that fed everyone on the island for weeks, are more sinister than they seem.

Again, it’s very Lovecraftian—not just Lovecraft-as-set-dressing, but truly in the spirit of those stories. The approach is a bit heavy-handed, and the atmosphere laid on thicker than it needs to be. At its core though, Call of Cthulhu is the story of a man forced to look into an abyss.  As you discover more clues, you realize maybe you don’t want to know all the answers here, or perhaps that Pierce can’t handle the answers.

You have to keep looking though, picking up documents and listening to recordings on old wax cylinders, trying to find Sarah Hawkins. Most of the early game is spent quietly wandering through various rooms, hunting for items to interact with. It’s an adventure game, really.

Pierce is a fine detective, too. His skill tree is lifted from tabletop, albeit simplified. There are seven skills in all: Psychology, Investigation, Eloquence, Strength, Spot Hidden, Medicine, and Occult. The first five of these are player-governed, and you can sink points into them as you head through the story. The other two, Medicine and Occult, are only improved by finding items in the game.

And I didn’t realize until late in the game, but the skills are quite literally handled like a tabletop RPG character. Certain options are gated based on how many points you’ve put in—you might see, for instance, a dialogue option that’s grayed out because you haven’t achieved the “Professional” rank in Psychology yet. For the most part they’re treated as percentages though, with behind-the-scenes dice rolls. A 60 percent in Medicine means you have that much chance to succeed, even though the game won’t tell you it’s rolling dice to determine that fact.

It’s not a great system. Not for a video game, anyway. It works fine in tabletop, when the person running the game (the DM or dungeon master) can re-route the story around players missing a clue. In Call of Cthulhu though, it feels arbitrary. You might have an 80 percent in Investigation and Pierce breaks the lock trying to pick it. Then usually that’s it, you’ve locked yourself out of that room. There’s no subsequent option to, you know, break the door down or whatever.

Those issues get worse over time, too. I’ve said already the early chapters are the best, and I mean it. Call of Cthulhu starts strong. When you first arrive on Darkwater for instance, you’re told you need to get into an old warehouse, once a storage space for the Hawkinses.

You’ve got plenty of options. You can convince the police guarding it to let you through, or bribe some sailors with a bottle of alcohol, or crawl through some gas-filled tunnels to come up through the rear entrance. Another standout mission follows soon after, as you try to sneak out of an asylum and are given a number of different ways to cause a distraction.

The longer you play, the fewer branches there are though. Later missions are basically “Go here and do this,” ditching any real roleplaying opportunities for Pierce.

It gets bad, too—or more scattered, at the very least. Call of Cthulhu starts at a meandering pace, truly a detective game at its core. A few hours in it gets restless though and starts bombarding the player with mediocre stealth missions, with guards that alternate between omniscient and blind. Then it starts mixing stealth with trial-and-error puzzles, which is even more frustrating.

And then it goes completely off the rails towards the end, with the only real combat section of the game. Pierce is given a gun and apparently infinite ammo, just mowing down the people who are sent to stop him. It’s not even a satisfying FPS segment, nor do the controls make any sense. You tap “E” to fire, and it’s quite literally rolling whether you hit an enemy against Pierce’s strength stat. You can fire right at someone and the gun misses regardless.

The whole section feels unnecessary. A lot of it does, the stealth bits included. I’d love a Call of Cthulhu that was 100 percent Edward Pierce playing detective, but instead those parts are mixed in with a cavalcade of more “traditional” video game ideas, none of which are executed very well. Hell, most aren’t even explored much. There’s an entire “sanity” mechanic for instance where Pierce starts freaking out in dark or confined spaces, but it has zero bearing on the game and you’ll be hard-pressed to even trigger it. There’s a clever twist on the dialogue wheel later in the game too, but after a few gimmick uses it disappears.

It makes the otherwise interesting story a chore to play through, even if the game is only seven or eight hours long. A lot’s been made of Call of Cthulhu’s technical issues, and there are certainly many. Lip-sync and other animations are stiff, or even nonexistent. Textures are muddy, with lots of pop-in. Slowdown and hitches crop up for no discernible reason.

But I could honestly overlook those problems, given the right game. They’re a factor, sure, but I’ll take a unique-but-flawed experience over a polished-but-empty one every day. See also: Vampyr.

Call of Cthulhu just feels disjointed. It’s got a ton of great ideas, but all of them feel half-explored and even less finished. The tone is spot-on, but that’s about it.

Give me a sequel, though. It’s not so much that Call of Cthulhu is irredeemable as much as it feels flawed. “Less than the sum of its parts,” I’d say. Any one aspect of Call of Cthulhu sounds intriguing in isolation, but put them all together and it’s a mess of disparate elements, all fighting for control.

I hope the developers get a second chance to iterate on Pierce’s story, one that’s more confident in its approach—one that’s a detective story through and through, that doesn’t feel the need for hackneyed stealth sequences or a dreadful combat scenario just because “Games have to have those things.” They don’t, and Call of Cthulhu didn’t.