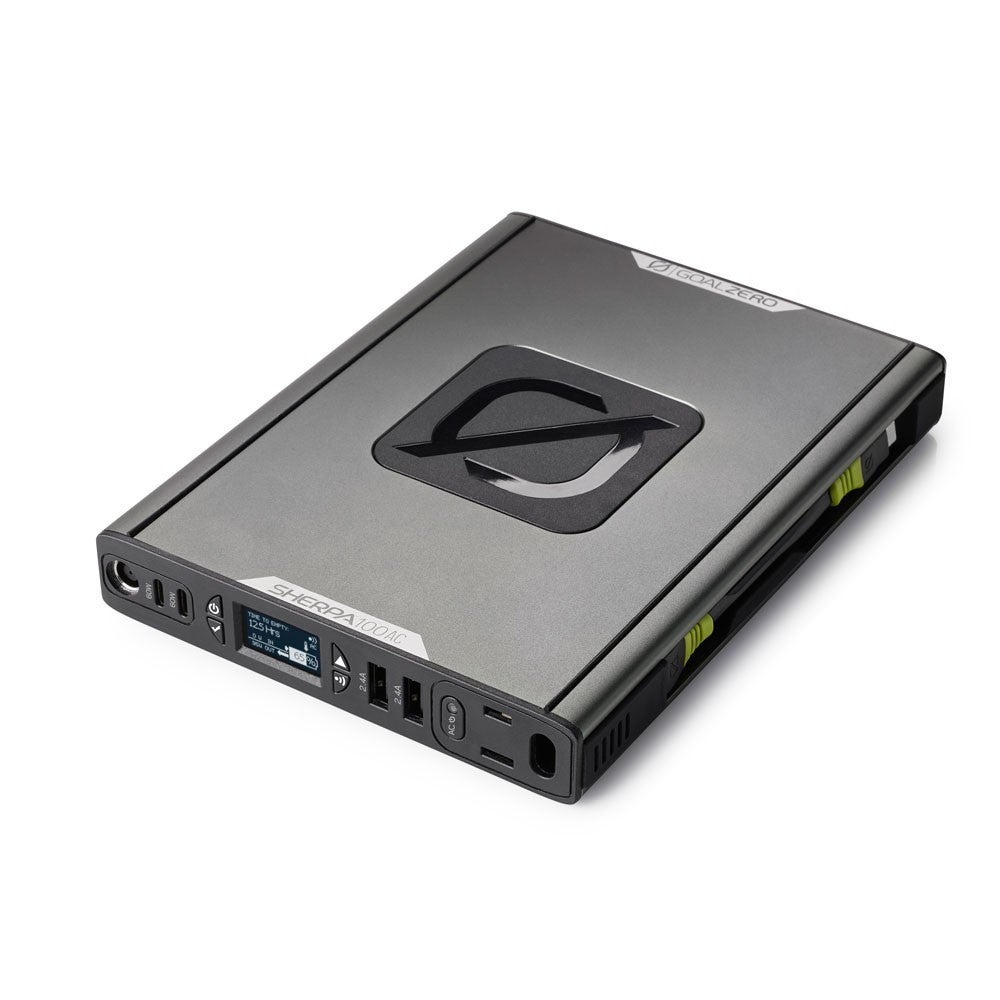 Goal Zero
At a Glance

There’s also a charging port, that can fill up the 94.7Wh battery pack in just a couple of hours. You’ll need to purchase that dedicated charger separately. However, our testing showed that a USB-C wall adapter with Power Delivery charged the Sherpa in just over two hours.

The Sherpa 100AC is pricey. It’s currently listed at $299.95, which is a lot for a battery pack. But the Sherpa isn’t your typical battery pack.

The front of the pack is where you’ll find all of its ports, along with a small display. The screen will show you the battery’s charge percentage, the amount of time until it will die based on the current usage, and a breakdown of each port’s current output.

There are four buttons, two on each side of the screen, for controlling various functions. A power button turns the pack on and off, as well as adjusts the display brightness with multiple presses. The check-mark button is used to change settings. The button with a triangle on it breaks down port usage, or if you press it for about 5 seconds, it takes you to the settings menu, where you can view historical input and output of the pack, change the behavior of the USB-C ports (auto, input, output), and view other system stats. Finally, the Wi-Fi like symbol is used to toggle the wireless charging pad on and off.

The pad is located on top of the pack, directly in the middle. On either side of the pack there’s a slot where you can stash one of the included cables. Included in the box are four cables: Lightning, USB-C, and USB-C to USB-C. Each is just a few inches long, making them portable.

The two USB-C ports are capable of Power Delivery speeds, meaning they can fast-charge the likes of the Pixel 3 XL, or charge a Nintendo Switch thanks to the 60W capability. You can also use the USB-C ports to charge the Sherpa, which I used to test charge speed via the Huawei Matebook X Pro charger. The 65W wall adapter and USB-C cable charged the Sherpa 100AC in 2 hours and 15 minutes. Using the Samsung wall adapter and a USB-C cable, charge time was over 12 hours. The standard USB ports are the typical 5V/2.4A output, so the same as the stock iPhone wall adapter.

I took the Sherpa 100AC on a trip with me recently, toting it around in my backpack. It’s bigger and heavier than most battery packs I carry, but not so much so that I could tell a difference.

The wireless charging pad has a max output of 5W, which is on the low end of the current Qi specs. And I think the emphasis here is on max. In testing the iPhone XS on the pad, it charged the phone’s battery to 28 percent in an hour. That’s the slowest wireless charger I’ve tested yet.

As for overall capacity, I put the Sherpa 100AC through our normal efficiency testing and it output 78.78 percent of its total capacity, putting it in the middle of the pack when compared to other battery packs.

The Sherpa 100AC isn’t for everyone. Its price alone excludes a lot of potential buyers. Instead, it’s built for someone who’s frequently away from outlets, but needs a reliable and fast battery pack, without having to worry about what kind of connections he or she needs. And in that regard, the Sherpa 100AC excels.

Bottom line: If you need a versatile battery pack that you can take in your carry-on bag, and can charge practically any device you own, then the Sherpa 100AC is it.