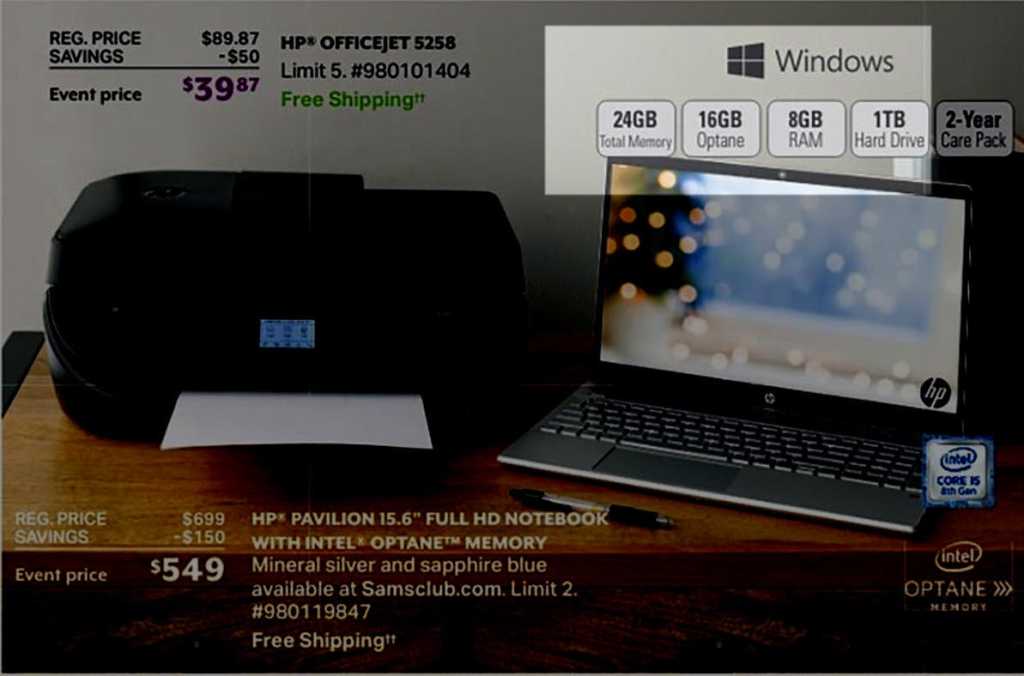 When does a PC have “24GB of memory?” When its Intel Optane Memory, which assists in storage, is being counted on top of the 4GB, 8GB, or 16GB of RAM we’re used to seeing on mainstream PCs.

Traditional RAM and Optane Memory do different things, so the fact that some PCs are showing this blended spec is bound to confuse shoppers looking for new PCs over the holidays. We’ve taken a closer look at what’s being advertised and how to understand what the PC you’re shopping for really has in terms of RAM.

The difference between RAM and Optane Memory

Our story started with the Sam’s Club Black Friday ad above. The ad took the PC’s 8GB of RAM, added the 16GB of Optane Memory, and advertised the system as having “24GB Memory.”

But as all PC users should know, RAM is just a temporary holding place for data. Once power is cut, everything in your RAM is erased. Think of it like counter space in the kitchen, while your hard drive (or other storage) is the refrigerator. When dinner is over, the counters have to be cleared and food put away in the fridge, or else it’ll spoil. In the same vein, you save everything to the hard drive before powering off your PC, because it dumps whatever is in RAM.

In contrast, Optane Memory is a form of Intel’s stupidly fast Optane storage technology. Check out our review of Optane Memory for all the details, but basically Optane is magnitudes faster than a spinning hard drive and can rival the speed of budget SSDs. And unlike RAM, it doesn’t erase itself when you power off.

Intel uses Optane Memory either as storage, or as a cheap way to make mainstream PCs feel faster even if they’re still using slow (but economical!) spinning-platter hard drives. The Optane Memory stores applications and data you access often, while less-frequently used data stays on the hard drive.

We love Optane Memory, but bottom line, it’s not RAM. That’s where the rub is. Blending the two could make some users think they have 24GB of RAM, when what they really have is only 8GB of RAM—plus the 16GB of Optane Memory. While some may argue that mainstream users don’t know the difference, we think it’s better to be totally clear, like in the Office Depot ad above, and let people know exactly what’s what.