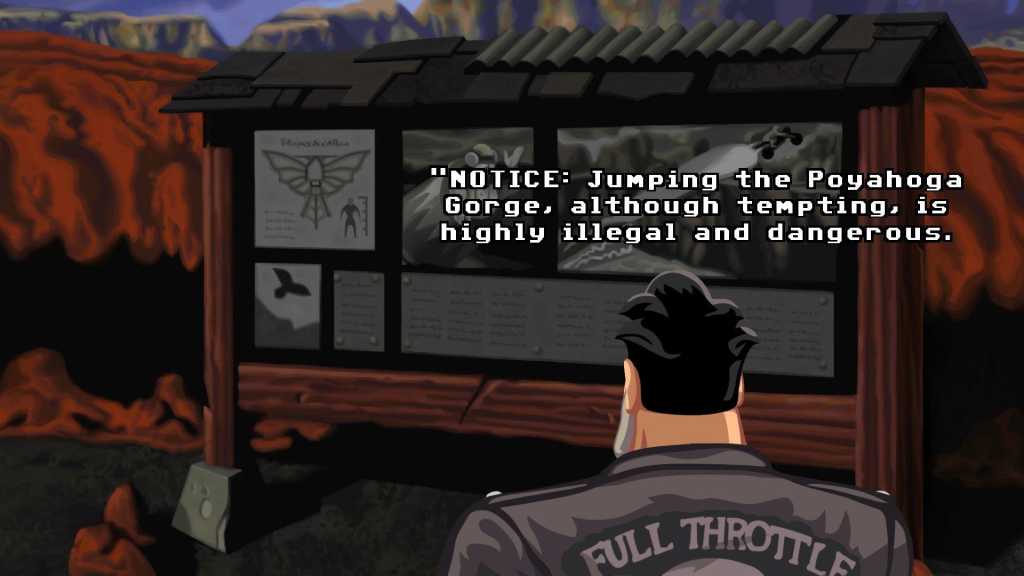 It’s beginning to feel a lot like winter, which means it’s time for all the various winter sales to start kicking off. GOG.com is first to usher in the holiday spirit, with “1900 deals up to 90% off.” But more important: GOG’s giving away free copies of the LucasArts classic adventure game Full Throttle.

The story of a man, a motorcycle, and a whole lot of butt-kicking, Full Throttle was lauded in 1995 for its cinematic style and sharp writing. Double Fine remastered the game last year and you know what? It’s still pretty great.

Well, the writing’s great at least, poking fun at the Bruce Campbell machismo archetype with its one-liners and self-serious plot. The game part hasn’t held up as well, though. As I wrote last year, “ Full Throttle feels like a relic, torn between two eras,” with the puzzle-heavy silliness of Day of the Tentacle on one side and the grand scope of Grim Fandango on the other. Full Throttle is easier than the former, and much, much shorter than the latter.

But who cares if it’s short? You’re getting it for free, right? Full Throttle is an incredible giveaway game, one of those I’d be tentative to recommend buying but have no qualms saying is an important piece of video game history. There’s quite literally never been a better time to grab Full Throttle in the last twenty-odd years.

The deal’s only active for 48 hours though, and less as I write this. To claim your copy, head to GOG.com’s main page, sign in to (or sign up for) your account, look for the large Full Throttle banner right below the sale art, and then hit the big green “Get it FREE” button. Go through the steps and you’ll lock Full Throttle to your account forever.

And take a look around while you’re there. Looks like The Witcher III: Game of the Year is on sale for $20, Kerbal Space Program is on sale for $16, Pillars of Eternity II is marked down to $33, Shadow Tactics to $16, Vampire: The Masquerade – Bloodlines to $5, and that’s just from a cursory glance at the front page. There are plenty more deals to look through.

See you back here in a few weeks for the Steam Winter Sale.