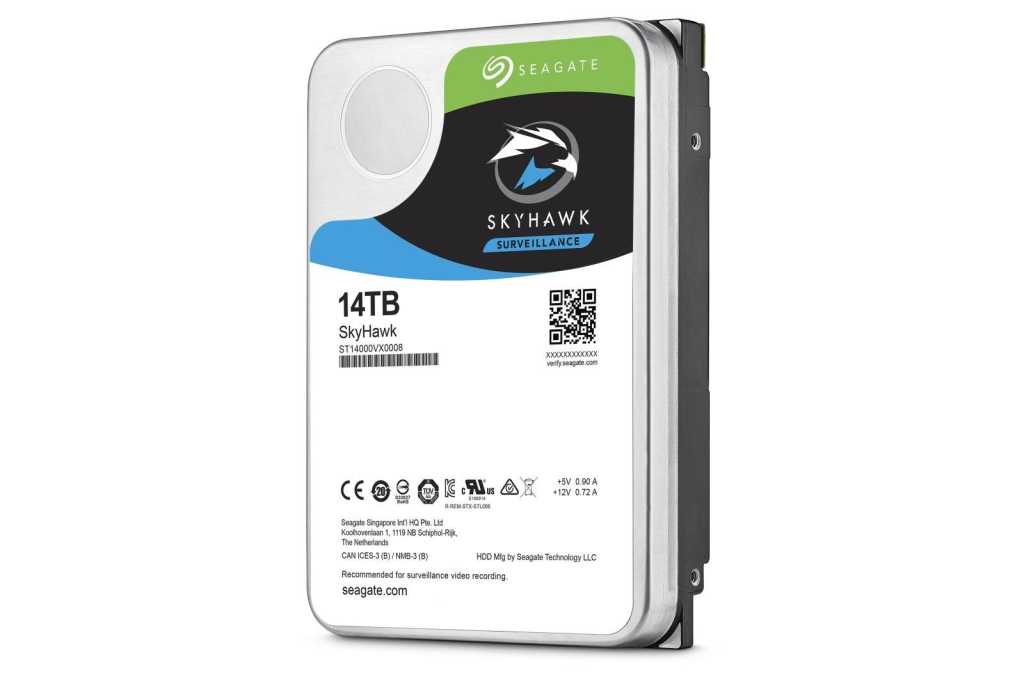 Though not as fast in our tests as Seagate’s IronWolf Pro, the SkyHawk is still a very fast hard drive, tuned for surveillance purposes. Seagate says it’s optimized for use in NVRs. The AI version is further optimized to support streams containing frame recognition information.

Ever in the pursuit of top performance, Seagate has recently released the $510 SkyHawk and announced the SkyHawk AI 14TB drives. These employ the same basic technology found on the the IronWolf, IronWolf Pro, Barracuda, and Barracuda Pro, but are optimized for heavy-duty surveillance work where multiple cameras (up to a whopping 64, though frame rates weren’t mentioned) are streaming to the hard drive. The goal being to drop nary a frame. One would hope.

The SkyHawk is a 3.5-inch, SATA 3 (6Gbps) hard drive with eight spinning platters and the accompanying read-write heads. It uses parallel magnetic recording and sports 256MB of DRAM cache. The plain version is warrantied for three years of full 24/7 use, while the AI version is guaranteed for five years.

Average power draw during operation is 5 watts, and 3.4 watts when idle. Rotational vibration sensors allow the drive to compensate for the rumblings of up to 16 other drives in an array. 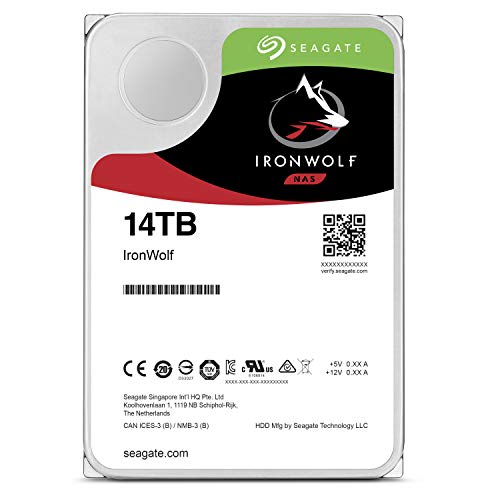 According to Seagate, ImagePerfect also supports larger cache sizes, but the SkyHawk’s 256MB capacity is the same as the IronWolf’s and Barracuda Pro’s. There’s also the fact that optimizing for video goes out the window when you put the SkyHawk into an array (RAID 0, RAID 5, etc.), where not all data is written to the same drive. As a single drive, or mirrored array, you might see some benefit.

As mentioned, according to Seagate the standard SkyHawk 14TB drive supports up to 64 cameras (depending on the resolution of the video) while the AI version additionally supports 8 AI channels (16 streams). AI streams contain information about pattern recognition performed on the video. As to Artificial Intelligence… Simple pattern recognition of faces, automobiles, license plates, and what-have-you, which is what we’re talking about, is not AI. AI just sounds sexier. See the ’80’s movie Short Circuit for the classic definition of AI, or the mimicking in total of the human mind.

We do not have the setup to truly stress a hard drive with 64 cameras, so we stuck with our usual methods: CrystalDiskMark, AS SSD (seek times and sustained throughput only), as well as 48GB real-world copy tests. In those, the SkyHawk closely tracks the performance of Seagate’s Barracuda Pro but falls slightly short of the company’s IronWolf.

The IronWolf is only a few MBps faster than the SkyHawk according to CrystalDiskMark 6, though it maintains a consistent two-percent advantage across all the throughput tests.

Seek times also favored the IronWolf, but the SkyHawk finished in a statistical dead heat with the Barracuda Pro–well within the margin of error for the AS SSD tests.

As you can see from the copy tests, the IronWolf, Pro Barracuda Pro, and SkyHawk are far more alike than different. Any of the three will work in just about any usage scenario with likely only slight variations in performance.

As to those 64 cameras: If I were designing a surveillance system that complex, there would be SSDs at the point of the spear, which likely also minimizes the impact of hard drive firmware optimized for video streams.

The SkyHawk is an excellent hard drive, and all things being otherwise equal, the 14TB drive I’d likely put in a single drive or mirrored NVR. But its siblings the IronWolf and the Barracuda, and for that matter, WD’s Gold and Purple (another surveillance optimized drive) are also great drives. Just saying.