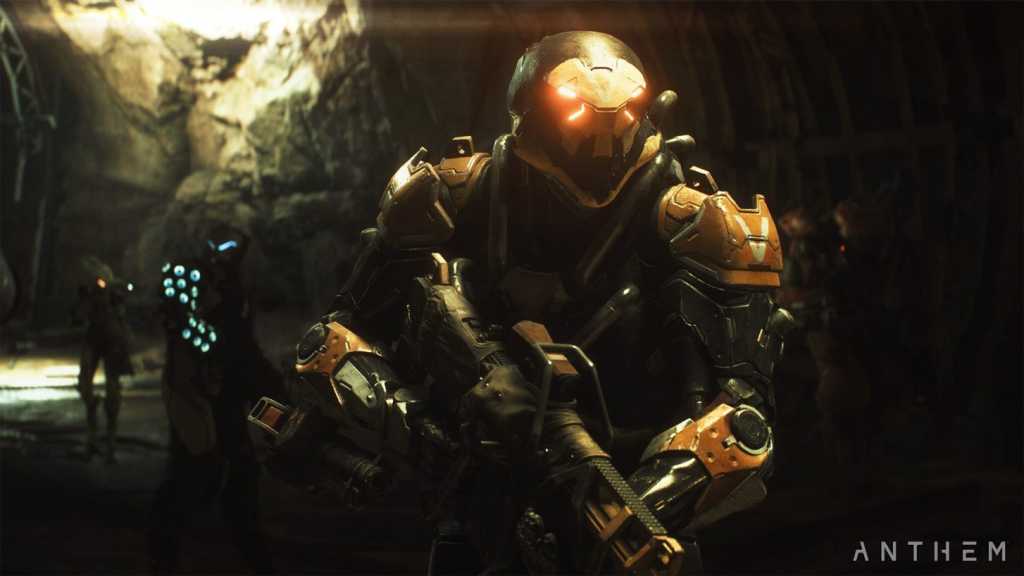 At E3 2018 we finally got a chance to go hands-on with Anthem and came away underwhelmed. Oh, it played great—the words I used at the time were “smoother than Destiny 2.” But as I noted at the time, Anthem ($60 preorder on Origin) is coming from BioWare, a studio known for story-driven singleplayer experiences, and yet there was no story on display at E3. “Tell me why BioWare is making this game,” I wrote, “because what I played feels like it could’ve been made by a dozen different studios.”

Well this week EA finally pulled back the curtain on Anthem’s story, as it were, giving us a whopping eight hours of hands-on time with the game. A little peek behind the curtain here: That’s a lot. Our usual hands-on previews run about an hour or two, and a particularly long demo might last three hours. Eight is unheard of, and indicates EA’s either very confident in the game or worried the hype isn’t high enough.

And I’m not really sure where I land either. Anthem’s still incredible to play, but even with eight hours BioWare’s legendary story chops didn’t shine through the way I’d hoped.

I don’t want to spend this entire preview dissecting how Anthem plays, in part because that was the focus of our E3 demo and in part because we’ll cover it again in next month’s review. It really is smooth though. That’s the most fitting description. After years making incredible games with middling combat, BioWare’s finally found its stride making third-person shooters.

Dodge. Double-jump. Triple-jump, if you’re using the agile Interceptor class. Transition seamlessly into flying, then from flying into hovering and aiming your gun, then back into flying, then to swimming, then back to flying. No other game gives you this many mobility options except, well, Warframe. It’s why that particular comparison feels so fitting at times.

And it’s Anthem’s highlight, to be honest. We didn’t see much of the map even with eight hours to explore, focusing on missions instead, but by far the best part was simply moving place to place. That’s saying something, as typically traversal is my least favorite part of an open-world game. In Anthem, I’d rather spend time doing aerial acrobatics than practically anything else.

Not that the rest is bad. The shooting didn’t impress me nearly as much as the simple joys of moving my character, but it’s solid. The “Heavy Pistol” class (equivalent to Destiny 2’s Hand Cannons) are particularly satisfying to land headshots with, taking out many grunt enemies with a single hit. Honorable mentions go to the light machine guns and marksman rifles, with assault rifles, machine pistols, and sniper rifles my least favorite.

Your secondary abilities are the real draw though. We had the opportunity to experience four of Anthem’s classes, or Javelins, in our demo. Each Javelin is a roughly person-sized mechsuit, though why anyone in the Anthem universe decided to make a mech with a cape I have no idea.

And yes, like in Destiny the class with the cape is the coolest and everyone’s going to want to play it. It’s the “Storm” class, though the name is a bit deceptive. Your skills aren’t just lightning-based but elemental-based in general—fire, lightning, and ice.

Storm Javelins are incredibly overpowered. That might change before release, but literally everyone I talked to at the demo agreed they are game-breaking at the moment. Ice powers allow you to literally freeze entire mobs in place, and you can just keep doing it and doing it. At one point I carried another player through a boss encounter on my own, doing probably 90 percent of the damage and ultimately winning the fight by flying around and peppering it with ice blasts.

Damn it feels great though. The Storm Javelin captures that feeling I love in Destiny 2 where you’re basically an unstoppable demigod. It might get balanced before release but I almost hope it doesn’t. Just make the other classes more useful, BioWare.

They could use it. The Colossus, Ranger, and Interceptor are your standard Tank/DPS/Sniper trio. Of them, the Interceptor is most fun to play because you’re super-fast and have a triple-jump. That said, even the Interceptor doesn’t have options as interesting as the Storm. The Ranger and Colossus meanwhile are simply not for me. Like playing a fighter in an RPG, they’re just boring utility classes.

Anyway, there are some interesting ideas surrounding customization. Whatever Javelin you choose, you unlock armor components that let you swap out your secondary abilities. The Storm starts with a lightning and an ice ability for instance, but there are multiple variations for each slot. It feels a lot more intuitive than Destiny’s leveling system, albeit not as easy to change on the fly.

Even better: You can play all four Javelins from the same character. It’s annoying that Destiny makes you run a different character for each class, so Anthem’s more flexible approach is welcome. Gear is per-Javelin, but it still seems relatively painless to change over.

And cosmetic customization seems like a focal point. No surprise, there. We got a glimpse of Anthem’s shop, and it looks like EA’s going to monetize armor pieces and decals to hell and back. At least you can change out your color scheme for free though, and the base armor looks cool enough as-is. I guess we’ll see how hard it is to unlock new cosmetic items when the game’s properly released, but I don’t really care if it’s all cosmetics. My only complaint is that hitting Escape brings you straight to the store before you can access the map or other important info.

That’s all how it plays though, and as I said we talked a lot about that at E3. Point is, it plays great. What I’m still not seeing is the BioWare aspect.

It’s not for lack of trying. We saw a lot of story in our eight-hour demo—multiple cutscenes, a lot of conversations, codex snippets. Anthem definitely doesn’t have the Destiny problem, where all the cool story bits are hidden in places the player will never look.

But “more” story doesn’t really mean “better” story, and Anthem’s feels rickety to me so far. You join the game as a Freelancer, a mercenary band of sorts tasked with combating cataclysms, world-threatening events generated by misuse of the Anthem of Creation, a technological artifact of sorts that helped create the world but occasionally malfunctions or…something.

Listen, if that paragraph made you feel tired just know it’s just as exhausting to write it, and to play Anthem. BioWare’s attempting to spin up an entire universe all at once here, and the opening hour of Anthem is the info-dump to end all info-dumps. Characters don’t really talk with you as much as at you, conversations peppered with terms you only half-understand or half-remember. There are five-minute cutscenes full of Important Sounding People doing Important Sounding Things that I literally couldn’t explain if I tried. And if that weren’t enough, your home base is littered with documents to pick up every five or ten feet, more snippets of lore for the dedicated player to read through.

Someone will really love it, I bet, but it feels clumsy and overwrought. There’s no delicacy to Anthem’s story, at least the parts I played, and no real hook. Right out of the gate you watch world-ending events and see multiple team members die, but it’s a world you were introduced to five minutes ago and characters you’ve known for even less time. Anthem doesn’t give you any reason to care.

It reminds me of Jupiter Ascending, a comparison that will make sense to all 15 people who saw that film. Like Jupiter Ascending, you can tell too much work has gone into crafting Anthem’s universe, that BioWare’s trying to give Anthem as much depth in a single game as Mass Effect reached with three—and it just doesn’t work.

Again, these are early impressions. Maybe 80 hours will change my mind. I felt surprisingly unengaged though, with not a single character or story beat sticking in my mind after our demo day.

The story “sections” are odd as well. Between missions you wander around your little home base and talk to secondary characters. Unlike the main game though, these sections are in first-person and are a chore to control. The area you need to explore to acquire missions is too large, and your walk speed is irritatingly slow.

And most of the conversations simply don’t matter. They’re certainly not as deep as I’d usually expect from BioWare, though at least there are occasional dialogue options to remind you that yes, this did come from that developer. It’s got one leg up on Fallout 76 in that regard. Options are binary though, and usually break down to “Friendly Reply” or “Asshole Reply,” and it’s hard to tell whether your choices make any real difference. The actual dialogue isn’t so well-written I sought it out either—it’s mostly action-movie quips and such. There was one standout, a story quest that resulted in some…unexpected consequences for a certain scientist. But it was the exception in our demo, not the rule.

I want to believe there are more hilarious, inventive missions waiting. BioWare’s set up some interesting ideas: The Anthem and its relics can literally create something from nothing, which leads to (for instance) missions where you’re suddenly inundated with giant scorpions until you can turn the machine off. There’s a lot that could be done.

But what I played felt generic. I firmly believe Anthem ($60 preorder on Origin) could supplant Destiny if there’s a BioWare-caliber story underpinning its (let me say again: excellent) mechanics. I’ve still seen little-to-no evidence of that though. Playing it feels great, but I’d say the same about Mass Effect: Andromeda and it didn’t stop me from being bored by its repetitive missions and flaky plot.

There’s a VIP demo running this weekend (for people who preorder) and another open-to-everyone demo scheduled for closer to the February 22 release, so if you’re curious about how Anthem plays I recommend jumping into one of those sessions. I think you’ll be impressed by the Javelins at least, the moving and shooting aspects. Maybe that’s enough to win you over, maybe not, but it’s worth a shot.

Otherwise, stay tuned for our review sometime in late February when we can at last digest everything Anthem has to offer.