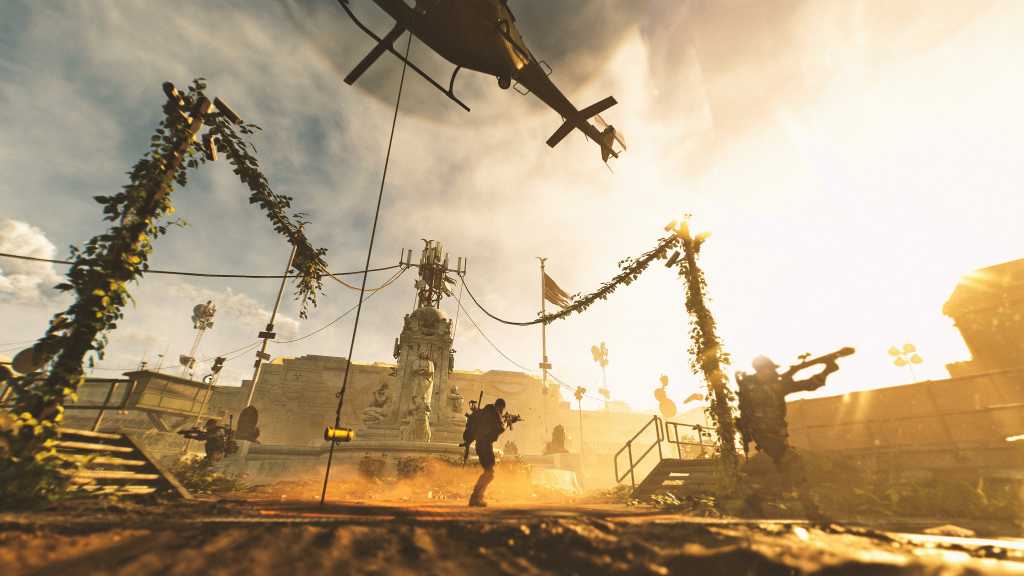 A lot has changed in three years. Funny, to think that “Games-as-a-Service” barely existed when The Division released in 2016, confined mostly to MMOs and a few ahead-of-the-curve experiments like Destiny. Now in 2019 seemingly every game is a service, and Ubisoft’s most of all. That makes it somewhat interesting to circle back to The Division 2, to see where lessons have been learned—and where they haven’t.

As with any of these sprawling live games, it’s hard to draw any hard conclusions pre-release. Ubisoft’s given us a fair shot though: Last week we went hands-on with The Division 2 for more than six hours, covering the beginning hours of the game as well as a single end-game mission. My takeaway? There’s certainly a lot to do this time, even if the quality seems mixed.

I’d hoped to talk more about The Division 2’s story after this latest preview event, but alas I can’t. I mean, I can tell you the basics. Set seven months after the events of The Division, the virus that wiped out Manhattan has spread to Washington, D.C. and turned it into a ghost town, patrolled primarily by roving bands of armed miscreants. Some are friendly, most are not, and it falls to you as one of the last agents of a collapsed government to…I don’t know, restore it? Probably.

Don’t get me wrong, we did see some of The Division 2’s story in this six-hour demo session. It was hardly ideal circumstances though, as we were constantly in groups of four—meaning the team chatter almost always drowned out any ambient dialogue or radioed instructions.

Even so, what little story I saw didn’t make me lament the parts I missed. The virus is a convenient excuse to wipe out a major metropolitan area and fill it full of gun-toting baddies of various persuasions. The details may well be unimportant. Ubisoft has mastered the art of saying nothing at all, as evidenced by both Far Cry 5 and Ghost Recon: Wildlands. If The Division 2 ends up the same, it’ll be hard to muster any surprise. Disappointment, perhaps, but not surprise.

I’ll reserve judgment, in any case. I played The Division primarily by myself, because that’s how I like to consume games of this type, or at least the story-driven moments. I’ll undoubtedly do the same with The Division 2, and I’m curious as to whether Ubisoft’s “The goal isn’t to make a political statement” nonsense will hold true or not—and whether anyone will care.

Story aside, six hours was plenty of time to get acquainted with The Division 2. Here’s where it gets weird: At first I thought it played better than The Division, and then later I wasn’t sure. Remember how I said we played the opening hours and then an end-game mission? Therein lies the split.

The opening hours are great, or at least they play great. The Division 2 starts big, with an assault on the White House. You’re hoping to break through enemy lines, link up with friendly forces at the White House, and then use it henceforth as your base of operations. It’s a bit cheesy, sure, but it definitely sets the tone. You’re here to save America. You’re a hero.

And you feel like that kick-ass hero as you run across the White House lawn. It’s a marked change from The Division, where guns typically felt like they fired marshmallows. In The Division 2 you’re deadly, mowing down enemy after enemy in just a few shots. This is still a shooter-RPG hybrid, but there’s less of that dissonant feeling where you shoot and shoot and shoot some guy in a hoodie and he just refuses to go down.

At least at first. When we broke for lunch, I was feeling pretty good about The Division 2—again, the playing it parts. The story, whatever, but the moment-to-moment action felt pretty good. It was definitely an improvement over the original and its mushy shooting.

Then we started the end-game mission. Set in the National Air and Space Museum, it’s another fantastic use of Washington, D.C. landmarks, culminating in a fight inside the powered-on planetarium. It’s easily as memorable as the standout Times Square mission in the original, and one of the few moments from our demo that I’m looking forward to playing a second time.

…Except the guns weren’t nearly as satisfying. Somewhere in the transition between early-game and end-game, the snappy and super-deadly feel of The Division 2’s guns went away, replaced by the same bullet sponge shooting from the previous iteration. It’s most likely the fault of the faction we were fighting, the Black Tusks, a pseudo-military force kitted out with all the same body armor and electronics as the player. They’re a step up from the ragtag militias you fight at the beginning of the game.

But I had a lot more fun fighting those militias. The Black Tusks are more tedious than challenging, forcing you into the same slow stop-and-pop routine as the first game. Armored enemies don’t even start to take damage until you’ve dumped an entire magazine of ammo into them and busted some armor off. It turned what should’ve been an exciting mission into a slog.

The tension was further undermined by a fondness for so-called “monster closets.” I thought we’d mostly left that design crutch behind, but The Division 2 loves nothing more than letting you think you finally cleared a room, only for three doors to pop open and more reinforcements to come barreling out. At one point we spent upward of 10 minutes defending a single room, Black Tusks trickling in two or three at a time until all I heard over the headset were exasperated sighs and “Wow, more of them?” from my group.

I left feeling much more tepid than I did at lunch. I guess what I want from The Division is still a third-person shooter with some light RPG elements, and what I feel like Ubisoft’s making (again) is an RPG with guns. That’s not necessarily a losing proposition. Destiny, for instance is one of the most satisfying shooters I’ve ever played period, despite heavy RPG elements. I’m just not convinced The Division 2 can hit the same balance. The original certainly didn’t.

That said, the infrastructure around the shooting has received a major upgrade. Loot drops seem more interesting, with a tier of powerful end-game items to collect and lots of re-rollable stats to keep gear fiends happy. You also get a loot box (of sorts) at every level—I wouldn’t be surprised if Ubisoft originally planned to sell these, before 2017’s grand loot box controversy. It’s a solid addition though, giving you some appropriately leveled gear as soon as you rank up instead of forcing you to scrounge.

And there’s just so much to do. That’s the one thing I can’t really convey in this article, and that Ubisoft couldn’t convey even in six hours. The breadth of content in The Division 2 seems pretty staggering, with main story missions a small fraction of what’s on offer. After completing the first two story missions we immediately unlocked something like a half-dozen side tasks, some of which felt just as long as mainline content. Given the complaints that The Division felt “thin” at release, I think Ubisoft’s determined not to repeat that mistake. If anything, we’re likely to see it lean more toward Ghost Recon: Wildlands, packed full of generic bloat for no real reason.

We’ll see how I feel after 30 or 40 (or more) hours. As I said up top, even these all-day events somehow don’t cover enough to draw any hard conclusions about games this sprawling. I think it plays better than The Division, but I’m still a bit unsure even of that of after an hour or two of playing end-game content.

There’s a beta-demo at least, if you’re hoping to form your own opinion. I wouldn’t recommend you pre-order any game, but doing so gets you guaranteed beta access from February 7 to 10. Otherwise you can sign up here for the chance to get a spot. Couldn’t hurt, right?

Regardless, we’ll be back sometime around March 15 with our final review. Or, you know, whenever we’re done with Anthem’s very-similar-feeling loot grind.